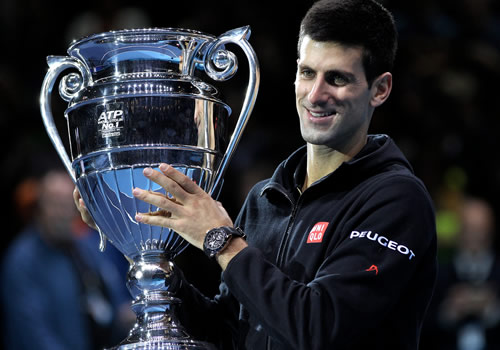 Not for the first time, and probably not for the last, Novak Djokovic finished the tennis season on a high—in more ways than one.

He closed out 2014 at No1, holding the ATP World Tour Finals trophy, recording the most wins over top-10 players, and with the most titles on the tour—and only one of his seven, Beijing, lower than a Grand Slam or Masters.

He also ended the year for the first time as a father, though he barely missed a beat, extending his unbroken indoor winning run to 31 matches through two years. Days after Stefan’s birth, Djokovic defended the Paris title to notch up 600 career match wins and his 20th Masters title.

In truth, he had begun to look tired, and relished his early return home after Roger Federer pulled out of the London final. Even so, back with his wife and son in Monte Carlo, he did not bury himself away. A few days later, he joined a march, organised by Prince Albert of Monaco on behalf of the Peace and Sport Foundation—for which Djokovic is an ambassador—to mark the 25th anniversary of the Convention on the Rights of the Child.

This week, he took to social media to engage with his fans via Twitter and Facebook, and talked for the first time about life as a father—and it was clear from his happy demeanour that he is still glowing from the events of recent weeks.

“I don’t have many days off, I’m all the time with my baby and wife trying to contribute. There’s a lot of commitment and obligation around the house—though my wife does most of it—but I’m there to support as much as I can.

“My favourite thing? To watch every move, every breath, and every single reaction of my boy. I should enjoy it now, because it changes very quickly.”

But in what is already a very brief window in the tennis year for enjoying homely pleasures, Djokovic has no intention of letting the grass grow under his feet. He long ago committed to the inaugural playing of the International Premier Tennis League, signing up for a stint with the UAE Royals when they play at home in Dubai in a week’s time. Now, he is off to New Delhi for this weekend’s action too.

On the evidence of the ties played already, it will be a lively and entertaining way to keep the tennis body and mind sharp, but the Delhi tie throws up a particularly attractive challenge: a possible match-up with Federer.

Djokovic’s preparation for 2015 begins in earnest, though, in Abu Dhabi on 2 January at the Mubadala World Tennis Championships. And while it is not part of the main tour, this event has built a big following, drawing as it does six high-ranked players to fight for the big prize-money.

Djokovic played the event for the first time in 2011, the first step towards an unprecedented season of 10 titles for the Serb, and he has won in Abu Dhabi every year since, so it’s little wonder he is sticking to his tried and tested opening.

It is also handy for an interesting break with tradition that follows, for Djokovic has opted to play a tour event before the Australian Open for the first time since 2009, and has decided to head up the Persian Gulf to make his debut in Doha.

He and the tour then head to the southern hemisphere for the first Grand Slam of the year, where he won his first Major in 2008. He went on to claim three more Australian Opens before losing in the quarters last year to champion Wawrinka.

Already the Serb is the hot favourite to reclaim the title, and his pumped up schedule suggests it is high in his priorities too.

Djokovic is then due to head back to the Middle East for the Dubai 500, where he lost out to Federer last year, before, in another addition to the Djokovic schedule, he joins Serbia for their Davis Cup tie against Croatia.

In 2014, he made a rare bypass of Davis Cup having played all four ties in 2013—winning all seven of his singles rubbers—on the way to a runners-up place against the Czechs. Perhaps the switch in the Davis Cup scheduling has made it more viable again: Last year, the first round came just days after the Australian Open, but this year it will be played in the first week of March.

The only fly in the ointment is that the already-gruelling back-to-back Masters of Indian Wells and Miami, two of the biggest tournaments outside the Grand Slams, begin the following week.

For Djokovic, this could be a problem. Last year, he beat Federer in the final of one and Nadal in the final of the other to became just the second player to win the Indian Wells-Miami double for a second time.

There is relief, of sorts, after the North American swing as the tour draws a line under hard-court tennis for almost four months. April brings clay, and while Djokovic has not revealed his intentions on the red stuff, he does have the chance for a significant break ahead of his most important target, the French Open. The Monte Carlo Masters is not a compulsory event so he may opt to focus on Madrid, which he missed with injury last year, and the defence of his Rome title, before heading to Paris.

It is no secret how large Roland Garros looms in Djokovic’s resume, for it is the only Major he has yet to win. It’s a familiar scenario in the era of the all-conquering French Open champion Nadal: Just ask Federer, who won his only title there after Nadal’s one and only defeat, to Robin Soderling, in 2009.

Six times Djokovic has faced Nadal at Roland Garros, six times he has lost, though he came mighty close in a five-set classic last year, and won the opening set in this year’s final.

Djokovic gave a glimpse of just how significant his only missing Major is when asked about it at the conclusion of his winning run in London:

“Well, right now I’m at my pinnacle in the career. Physically I feel very fit. I’m very motivated to keep on playing on a very high level. So as long as it’s like that, I’m going to try to use these years in front of me to fight for No1 of the world and to fight for biggest titles in the sport.

Whichever way you look at it, Djokovic’s schedule through the ‘off’ season and into 2015 is an intense one: highly motivated, hugely confident—just like his words. He clearly has no intention of taking his foot off the accelerator—or his eye off that one elusive prize.