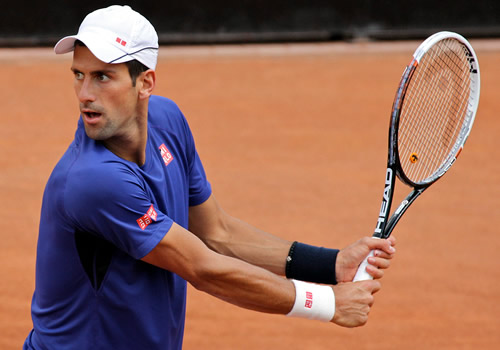 Novak Djokovic is currently ranked No2 in the world Photo: Marianne Bevis

When defending champion Novak Djokovic left the Centre Court of the Monte Carlo Country Club after losing his semi-final to Roger Federer last weekend, the signs did not good for the many fans of the world No2.

Having struggled with a wrist problem all week, Djokovic played the match with heavy strapping from right wrist to elbow and, after a gruelling first set, was clearly struggling to maintain power on his serve and backhand. He lost the second set and the match, 6-2, afterwards revealing that he needed both to consult with doctors and take time off to rest.

“The pain was there every single day from 10 days ago. At some stages it was very painful… I tried not to think or talk about it, I did everything I could, I was on the medications every day, I was doing different therapies, injections, so forth.

Fortunately, the situation with the injury is better than it first seemed

“The good thing is I don’t need to have surgery. I don’t have anything ruptured or something like that. I’m going to go see doctors tonight and then tomorrow again have another MRI—see if anything changed in this seven days since I had the last one.

“I just rest now. I cannot play tennis for some time. How long, I don’t know. It’s really not in my hands anymore.”

But since consulting with specialists, the news has become considerably more positive. With the headline “Djokovic: I’ll be ready for Madrid”, the Serb’s official website has reported that the wrist injury was less serious than originally feared.

The statement continued: “Six-time Grand Slam champion Novak Djokovic should be able to play the Masters tournament in Madrid [which begins on 4 May]. The good news is that the most recent medical analysis showed the right wrist injury isn’t that serious. On the other hand, the doctors advised Djokovic to rest for several days, before returning to tennis.”

Djokovic added: “Fortunately, the situation with the injury is better than it first seemed. Doctors assured me that I will be ready for Madrid, then Rome and Roland Garros, just as it has been planned. However, I need to continue with the recovery process and full medical treatments. It means I will have to take a short break in order to recover as soon as possible.”

The injury came at a crucial time in the Serb’s campaign for his first French Open title. He came within touching distance of beating Rafael Nadal in the semis last year, losing a classic match 7-9 in the fifth set, and has made no secret of his desire to claim the one Major missing from his resume.

But he also has hopes of regaining the No1 ranking which he lost to the Spaniard last autumn. Nadal is defending maximum points through the rest of the clay season—he last year won titles in Barcelona, Madrid, Rome and at Roland Garros—while Djokovic has room to gain big points after losing, in 2013, in the first round in Madrid and the quarterfinals in Rome, as well as the semis in Paris.

Judging by recent form, Djokovic certainly has cause to be optimistic about his chances. Until he lost to Federer in Monte Carlo, he had put together a winning run of 15 matches and was aiming to become the first man to win five Masters titles in a row, having triumphed in Shanghai, Paris, Indian Wells and Miami back to back—also taking the World Tour Finals along the way.

What is more, Djokovic’s results on clay over the years have been outstanding. His first clay Masters title came in Rome in 2008. Then in 2011, he beat Nadal to claim both the Madrid and Rome trophies, losing to the Spaniard in the Rome finals in 2009 and 2012. Also impressive—though increasingly frustrating—have been his results at the French Open. Four times he has reached the semis, losing three times to Nadal and once to Federer. And he reached the final in 2012—again losing to Nadal.

However, it was last year’s meeting at Roland Garros that proved, as much as any clay-court match that the two top-ranked men have played, that Djokovic has the wherewithal to beat Nadal on the biggest of clay stages.

The news that the Serbian’s wrist is healing fast should, then, put a spring into the step of Djokovic and all his worried supporters.