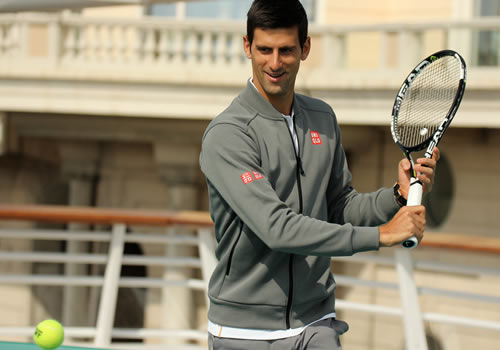 Novak Djokovic is the top seed at the Paris Masters Photo: Marianne Bevis

2015 is proving to be something of a show-stopper all round for the new-look BNP Paribas Masters, the last but certainly not the least Masters tournament of the season in Paris Bercy.

But it is the players themselves who are making this year’s Paris Masters rather special. For one thing, it is only the third of the nine ATP1000 tournaments this year to feature the top eight men. For another, it is the first time since 2008 that the only indoor Masters of the year has boasted all eight of the top players in its draw.

For coming at the very end of the long and arduous tennis calendar has been something of a double-edged sword for this tournament.

On the one hand, it has not been unusual for Paris to lose top names through fatigue or injury. Rafael Nadal withdrew last year with injury and appendicitis. Andy Murray was recovering from back surgery in 2013, and Roger Federer bypassed Paris in Olympic year after the then 31-year-old had played the most matches in a season since his 12-title year in 2006.

On the other hand, the French capital has been the scene of dramatic last-chance ranking scenarios ahead of the climax of the year at the World Tour Finals. The last two years are a case in point.

In 2014, the best in the world were not just competing for a Masters crown. Novak Djokovic and Federer were still vying for the year-end No1 ranking, while half a dozen other men competed for a place at the World Tour Finals—it was the final opportunity for Murray, Kei Nishikori, Tomas Berdych, David Ferrer, Milos Raonic and Grigor Dimitrov to claim one of four remaining places at the season finale in London.

It was the same in 2013: Three out of seven men who started in Paris had the chance to qualify for London—among them also Federer.

But this year, all the top eight are present and correct: What’s more, all are already assured of their place on the starting blocks in London.

Good news for the eight, of course, though less good news for those who follow. For Paris has proved something of a Masters opportunity for the men not named Djokovic, Murray, Federer and Nadal. Coming into the French capital, 47 of the last 51 Masters titles have been won by those four—slim picking for the rest.

But the occasional absence of one or more of the four has in the past opened the door just a crack. It is surely no coincidence that of the four other men in the draw to own a Masters title, three of them have won in Paris: Ferrer and Berdych won their only 1000s here, while Jo-Wilfried Tsonga won one of his two in Paris.

Stan Wawrinka is the fourth Masters champion—on the clay of Monte Carlo—though in Paris this year, finds himself in the same half as Nadal and Djokovic.

But even aside from the kudos of the title itself, there is plenty at stake in Paris. For one thing, Federer rose to No2 in the rankings with his Basel win last weekend, but Murray stills holds the second spot in the Race—and that will determine the seedings when the two pools are drawn in London.

And no matter how well Murray and Federer have played this year, winning four and six titles respectively, and leading the rest in match-wins, 64 and 58 respectively, both would prefer to see king-pin Djokovic in the other pool—and thus be assured of avoiding the mighty Serb in round-robin phase.

As so often during the course of this season, however, many eyes will be on Djokovic. In a year of recurrent highs, of title after title, of dominating the rankings, the Masters and the Grand Slams, he has become almost impregnable.

This year, he has already reached the final of 13 tournaments in a row, won nine titles—including three Grand Slams—and 73 matches from 78.

Indeed, he has barely lost a match since he arrived here a year ago, little more than a week after the birth of his first child. He won his third Bercy title and went on to win the World Tour Finals crown unbeaten. That makes 11 titles in 15 finals, 82-5, in the space of 12 months.

Now with an opening win already under his belt this week, he extends his match-winning streak to 18—beginning with the US Open and taking in Beijing and the Shanghai Masters. Go back still further, and he has another remarkable unbeaten streak: He has not lost on an indoor hard court since his opening-match loss in Paris in 2012.

And most suspect Djokovic’s achievements this year will not stop there. Should he win his fourth Paris title, he would be the first to do so, and also the first ever to win six Masters titles in a single year. That he remains supremely calm, confident and focused only serves to make the task of beating him still more daunting:

“I just feel more balanced in my private and professional life, being a father and a husband. It all makes more sense. I feel more complete. I feel more mentally and emotionally stable.”

So is there anyone who can halt the Serb’s streaks or ambitions in Paris?

• Missing injured are: Raonic, who this week falls outside top 10 for first time in 18 months; Philipp Kohlschreiber, leaving no German players in the singles draw.

• Borna Coric, the youngest player in top 50 and in the draw, age 18, won his debut match over Fernando Verdasco.

• France had 11 men in main draw, including all three wild cards: six in the top quarter, four in the bottom quarter: six have already lost.

Only four men have beaten Djokovic this year.

• The first, Karlovic, could have met him in the quarters here, but lost early.

• The next, Wawrinka, famously denied Djokovic in the title match at the French Open—and pressed Djokovic hard in a five-set Australian Open semi-final in January. However, the Swiss lost their most recent meeting, in the Cincinnati quarter-final.

• Murray ended an eight-match losing streak to Djokovic in an 8-19 head to head by winning the Montreal final. But Djokovic righted the ship with an easy win in the Shanghai semis last month.

• Federer is the only man to have beaten Djokovic twice this year, in two of their six meetings—all finals: Dubai and Cincinnati. Djokovic won both Wimbledon and the US Open in four sets, Rome in straight sets, and Indian Wells in three.

Round 3: First seed is No14 Gilles Simon, who beat Benoit Paire in three sets. Simon has not beaten Djokovic since their first meeting in 2008, but took the Serb to three sets in the last meeting in Cincinnati in 2014.

Quarter-final: Potential seeds are No9 Tsonga or No5 Berdych, both former winners in Paris. Djokovic has a 14-6 head-to-head with Tsonga, his most recent win last month in Shanghai, but Tsonga won their previous match in Toronto 2014. Djokovic leads Berdych 19-2 and has never lost to the Czech on a hard court. However both meetings this year went to three sets.

Semi-final: Most likely opponent is between No4 seed Wawrinka and No7 seed Nadal. Djokovic trails Nadal by just one win in 45 meetings, and has won seven of the eight played over the last two years, including his first at Roland Garros this year. Nadal is starting to regain the form and confidence that went missing after injury and illness decimated the end of his 2014 season, and arrives with a decent Asian swing followed by a three-set loss in the Basel final to Federer. And while Wawrinka has proved dangerous to Djokovic over the last two years, the Swiss did lose to Nadal in Shanghai last month.

Final: Biggest contenders are Murray and Nishikori, who could face off in the first quarter-final—though the in-form Richard Gasquet may upset the Japanese No6 seed—and Federer and Ferrer in the other quarter, though there is tough competition from Dimitrov for Ferrer and from John Isner for Federer.

Other matches to catch

• R2, yet another face-off between Nadal and Lukas Rosol—the Czech almost beat Nadal for the second time in four meetings, falling in a final set tie-break, in Basel last week.

• R2, Federer meets friend Andreas Seppi for the fourth time in a year that saw the Italian score his first victory in 13 matches over the Swiss at the Australian Open.

• R3 may offer up a preview of the Davis Cup final between Murray and David Goffin, who is already through via Dusan Lajovic.