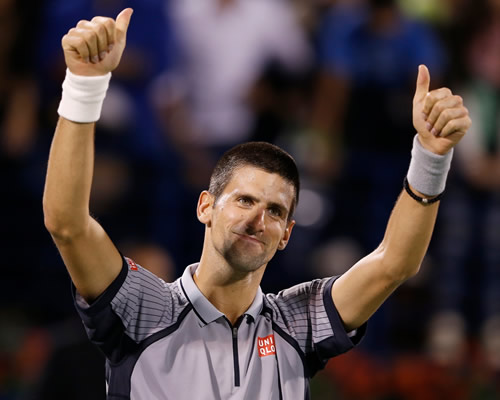 It’s been clear since Novak Djokovic arrived in Dubai that he has grown into the role of ‘best in the world’ with some aplomb.

In his bearing and in his words, he has become a man at ease in his skin and quietly unshakeable in his confidence.

Winning the World Tour Finals at the end of 2012 seemed to put the last piece into place: He ended his second year as world No1, and went on to take a third straight Australian Open title.

He leads the rankings by more than 3,000 points—a margin that will grow by a few hundred after this tournament. He has won his last 17 matches, going back to the World Tour Finals in London, and he has won 22 of his past 23 matches in Dubai.

Now he was in a position to win his fourth Dubai title, playing a man, Tomas Berdych, who he had beaten 11 times in 12 matches. No wonder he looked and sounded so confident—such as at his round table question-and-answer at the start of the week: “Mentally I do feel relief a little bit more than I did at the start of 2012.

“Because following up 2011 was an extreme challenge for me—mentally mostly because I still played really well but I knew that I found myself to be in the position to be No1 in the world and to defend Grand Slam titles, three in the whole year. So I consider finishing the year as No1 in 2012 maybe even a bigger success than 2011. Right now I feel great…and I’m ready for new challenges.”

After beating Juan Martin del Potro in the semis, his stance did not change:

“Mentally I stayed tough and believed that I could go all the way and win in straight sets. I didn’t really allow myself to be negative. I have been very, very positive and confident, so I think that resulted with overall a really good performance.”

Berdych, ranked six in the world, certainly had his work cut out, which he was the first to admit after his semi-final win over Roger Federer: “I have my homework for tonight to try and find something that could work at least a little bit.

“Djokovic is one of the best-moving players I’ve ever seen, especially on the hard court. It’s just incredible what he can get… so I will try to be patient. The court is very fast, so it could help my strokes.”

Berdych had already beaten Federer and Djokovic back to back once before—at the 2010 Wimbledon. He had also reached the final, only last week, in Marseille.

He was also right about the court helping his first stroke—a massive forehand winner off a Djokovic’s first serve—but the Serb replied in kind and looked as cool as a cucumber for the first four games. Then Berdych unleashed a bullet of a cross-court backhand to bring up break point and he converted it on the run to lead 4-2.

It did not take long for all that Djokovic positivity to work its magic, though. In the fourth game, the two men fought through four deuces but a flailing overhead smash from Berdych fired an easy ball way wide and Djokovic levelled at 4-4. He may have lost a little of his swagger, but he had lost none of his focus.

Nevertheless the big Czech attacked again, taking the lead 15-40 with a searing backhand winning return of serve. Djokovic held off the two break points, but fell heavily at the back of the court to concede a third chance. He saved that as well to hold.

Berdych levelled again, 5-5, with a 213mph serve but come his next service game, his backhand went AWOL, firing long three times, and a double fault gave the break. The set was quickly sealed by the top seed, 7-5, but it had been a demanding effort. Had the Czech’s first serve percentage approached that of his opponent’s 85 rather than a poor 51, he may well have taken the set.

Those serving stats were almost reversed in the second set, and some of the Berdych deliveries touched 210 mph plus. It kept him in touch against the increasingly frenetic defence of Djokovic, but the Serb always manages to get one more ball back—and invariably so deep or close the margins that his opponent is under constant pressure.

That was the case here, and at the key moment of the set, in the eighth game, Djokovic worked the score to deuce and then, in a near replay of the eighth game in the first set, Berdych smashed an overhead way long. This time, though, rather than the break levelling the score, it took Djokovic ahead, 5-3.

The Serb had one more minor wobble as he served out the match: A double fault brought up break point. But he countered with an ace, Berdych hit a backhand long and it was match point. The Czech withstood the pressure and brought it back to deuce—and in this heightened atmosphere, the umpire issued a time violation warning.

Calm as you like, though, Djokovic fired a winning serve and this time finished off, 6-3, in around an hour and a half, to take a 36th career title, and he must be the man to beat when the tour arrives in Indian Wells in a week or so. After all, this inquisitor suggested, if he can beat the big-hitting Berdych on the fast courts of Dubai, he should have no trouble on the slightly slower ones in California.

Even so, he believed that Dubai had improved his preparation for the first two Masters of the year: “I haven’t always been the player who loves to play on the fast, super-fast surfaces but I’m happy because during the week I can also work on my aggressivity [sic], coming into the net, using my serve better, and that’s what I have done in this tournament and in particular over the years.

“I have been trying to work on a few things that can give me more variety in the game.”

Woe betide the rest, then. That the man Berdych afterwards described as “definitely the best player now—proving it over and over again”—is working to inject more variety into his game is an intimidating prospect. Djokovic has, after all, already turned himself into arguably the fittest, both mentally and physically, in men’s tennis—and titles like the Dubai one serve only to prove it.