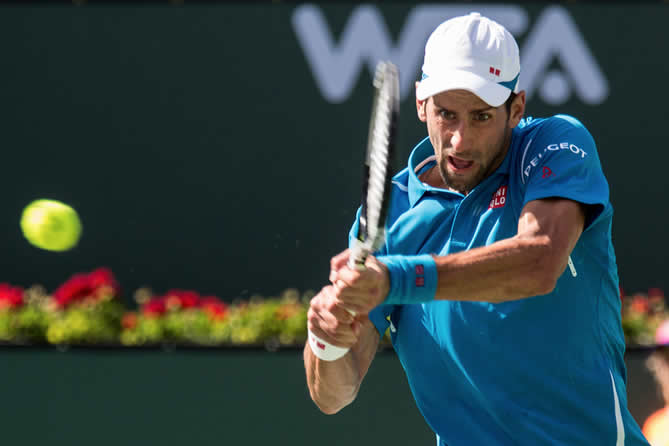 2017 has found Novak Djokovic living through what might be called “interesting times”.

After a year in which he closed the Grand Slam circle with his first win at the French Open, the physical and mental impenetrability that had fed his dominance since 2011 seemed at last to be feeling the strain.

Eleven of his 12 Majors were earned during that span and he rose to No1 for the first time with the first of those 11. He would barely be troubled at the top for five years, and went on to enjoy an unbroken stretch at No1 for almost two and a half years—until Andy Murray beat him to the title at the World Tour Finals at the end of 2016.

By then Djokovic had accumulated 66 titles, and he led his illustrious colleagues, Rafael Nadal and Roger Federer, with a record 30 Masters titles.

But after winning in Doha at the start of this year, the title-wins dried up. A second-round exit at the Australian Open to No117 in the world, Denis Istomin, raised eyebrows, and while two losses to a red-hot Nick Kyrgios in Acapulco and Indian Wells may be put down to ill fortune in the draws, a persistent elbow problem took him out of one of his favourite Masters, Miami.

Meanwhile, those two chief adversaries, Federer and Nadal, had bounced back from injury problems to take 2017 by storm. All the big titles—until Rome—were claimed by these two: the Australian Open, Indian Wells and Miami by Federer, and then the Monte-Carlo and Madrid Masters by Nadal. The pair topped the Race to London by a distance, with Djokovic only edging up to No7 on his 30th birthday.

Off court, Djokovic has seemed ill at ease, too, and announced a sudden parting of the ways with his team of a decade’s standing ahead of the Madrid Masters.

And albeit he played what he called his best match of the year against Dominic Thiem to reach the Rome Masters final, the precision tennis and incisive focus that he brought to those previous outstanding five years remained elusive. Certainly, he was pressed relentlessly by Alexander Zverev in the Rome final, but Djokovic scattered errors aplenty too.

All of which makes his 30th birthday rather more interesting than many anticipated when he turned 29. And top of that ‘interesting’ list is his announcement that he will be in discussion with Andre Agassi at the French Open about a future coaching role.

And all this as he prepares to become a father for the second time later this year.

Taking the wider view, however, each of his fellow rivals, each of them beating him to 30, have had their dips.

Federer in 2013 won only Halle amid doom-laden predictions that age was catching up with the super Swiss. Knee surgery last year left him title-less and out of action for most of the season, and he played in Melbourne seeded No17. Yet he surged his way through four top-10 men to win his first Major in almost five years.

Nadal, a casualty of wrist injury at last year’s Roland Garros, was seeded outside the top eight in Australia and pressed Federer to five sets in the final. He beat Djokovic for the first time in almost three years in Madrid, and has already won three titles to head the Race.

Murray, too, has had his physical problems, had back surgery, but went on to win his first Masters on clay, his second Wimbledon and Olympic titles, and to climb to No1 after a career-best season.

Murray turned 30 a week before Djokovic and, like his junior/senior friend/rival, has suffered something of a come-down from 2016’s exertions. But few doubt that 30 for either Djokovic or Murray will be anything other than a gateway to more achievements.

After all, the top five players in the world are all now in their 30s, and Federer, Nadal, and the late-blooming Stan Wawrinka have already proved that there is no finish line as long as the desire continues to burn bright.

So as a prelude to the rest of Djokovic’s tennis year, here are 30 records and milestones that pack his resume.

4) 21 Major finals, equal with Nadal and second only to Federer

9) Youngest player to reach semis of all four Majors

11) Equal longest final at US Open vs Murray, 2012 (with Mats Wilander and Ivan Lendl)

29) Currently has winning record over all the “big four”