This was always going to be an unusual year for Roger Federer. Marianne Bevis takes a look at how it has unfolded so far 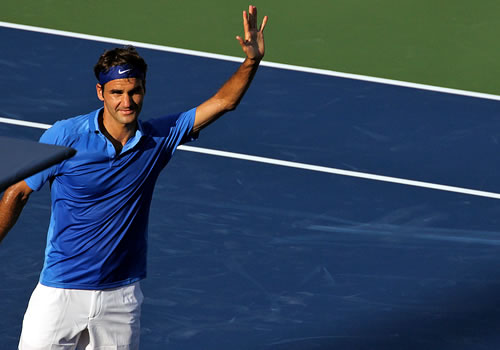 Roger Federer is yet to qualify for the ATP World Tour Finals Photo: Marianne Bevis

2013 was always going to be an unusual year for Roger Federer.

For a start, his new-look schedule, published at the end of 2012, reflected his closing remarks at London’s World Tour Finals: “I need to practise a whole lot more next year, because this year, I hardly had an opportunity to do so. I have some catching up to do from that standpoint.”

There had been a method behind the madness of such a heavy schedule. It had been front-loaded to put on the points needed to reclaim the No1 ranking and to peak for Wimbledon and the Olympics. In 2013, with the No1 record ticked off, the Wimbledon title regained, and a silver Olympic medal, priorities could be recalibrated.

So 2013 was built around blocks of recuperation and training, bringing some notable omissions. He scheduled no events before the Australian Open, no Miami Masters, no Davis Cup, and no Basel—though this was later added.

But as the trimmed Federer schedule unfolded, so did other unusual events. He failed to defend any of his titles in Rotterdam, Dubai, Indian Wells and Madrid, losing to some unexpected opponents, such as Kei Nishikori in the fourth round on Madrid’s clay.

Federer also faced the first of what would become two physical lay-offs. He had been troubled by lower back problems before—at the Masters Cup in 2008, even during Wimbledon last year—but rarely as often as in 2013. His game was compromised in a straight-sets loss to Rafael Nadal in the Indian Wells quarters and would hit his plans still harder over the summer.

Although a Rome final and the Halle title brought some relief, the well-oiled Swiss machine would falter again, and plans for his summer training block had to be rewritten.

It started with Wimbledon, where he encountered the most unusual twist not just of his year but of his last decade.

Against the 117-ranked Sergiy Stakhovsky, he faced a man who produced some of the finest tennis of the tournament through a full four-sets, beating the Swiss 6-7, 7-6, 7-5, 7-6. It was only the second round, and thus Federer’s earliest loss at a Grand Slam since the 2003 Roland Garros.

It ended, too, one of the most remarkable records in Grand Slam tennis, 36 consecutive quarter-finals, and it brought a new and peculiar look to the rankings. Having reclaimed the No1 spot at Wimbledon just 12 months before, Federer now fell to No5, the first time he had been outside the top four since Wimbledon 2003.

It was time for some unplanned adjustments. Before Wimbledon was over, Federer announced he had taken wild cards for the clay events in Hamburg and Gstaad—the first time he had played a summer clay swing since winning the Swiss tournament in 2004.

Then came news of trials with a bigger racket after playing with the same one for his entire pro career. He debuted the 98 sq in model at Hamburg, but lost in the semis to another man ranked outside the top 100. After losing his opener in Gstaad to the No55 ranked Daniel Brands, Federer revealed that he was again suffering from back pain: “I’ve had problems for some time now, already in Hamburg”.

So he pulled out of the Montreal Masters, healed his back, returned to his old racket, and despite losing to Nadal in the quarters in Cincinnati, he played a level of tennis that belied all the setbacks.

But another twist was still to come in this out-of-kilter Federer season. At the US Open, and switched belatedly to Flushing’s second show-court where he had not played since 2006, he lost to a man he had beaten in all of their 10 previous matches, Tommy Robredo. It marked Federer’s earliest loss in New York since 2003, but it was the method of his loss, and his disparaging assessment afterwards, that shocked.

He made 43 unforced errors in just three sets, and converted only two of 16 break points, commenting: “I kind of feel like I beat myself… Clearly he was making sure he was making many balls. It was up to me to make the difference and I couldn’t. I kind of self destructed, which is very disappointing… a frustrating performance.”

And so Federer found himself in one of the most unfamiliar places of his entire career: ranked No7 and without a Grand Slam final to his name for the first time in 11 years.

And so to today. He arrives at the Shanghai Masters from his training camp in Dubai as the only seeded player, indeed the only man in the 56-person draw aside from the injury-hampered Jerzy Janowicz, to have played no matches since the US Open.

There is another unfamiliar scenario, too: He has yet to qualify for the World Tour Finals in which he has featured for the last 11 years. He stands at No7 in the race with at least four men trailing him by fewer than 700 points.

Which brings to the fore one final unusual image, one in which Federer becomes the second-ranked Swiss to Stanislas Wawrinka.

For while Federer has coped with many twists in his 2013 path, so has Wawrinka. The popular but often over-shadowed Swiss broke the top 10 in 2008 but spent much of the next four years ranked in the 20s. Last summer, though, he began a steady ascent to the best form of his career, growing in both fitness and confidence alongside a new coach.

He made a huge impact against Novak Djokovic at this year’s Australian Open, losing 10-12 in the fifth set. He beat Andy Murray in Monte Carlo, reached his first Masters final in five years at Madrid and then his first ever Grand Slam semi in New York with wins over Tomas Berdych and Murray before losing another nip-and-tuck five-setter to Djokovic.

Now Wawrinka stands just one match-win away from overtaking Federer in the race to reach his first World Tour Finals. And in contrast to Federer, he has barely stopped playing since his gruelling US Open, first helping Switzerland into the Davis Cup World Group, then reaching the semis in Kuala Lumpur and this week playing at the China Open, where he has already beaten the 22-ranked Andreas Seppi. If he next beats Sam Querrey, he will earn the 90 points needed to claim the No7 spot in the race for perhaps the most significant step in his career.

Federer left New York over a month ago with the parting words: “I’ve definitely got to go back to work and come back stronger, get rid of this loss now as quick as I can, forget about it, because that’s not how I want to play from here on. I want to play better. I know I can. I showed it the last few weeks, that there is that level.”

He added: “I don’t think I’ll change my schedule. I believe if I do play well, I’ll make good results.” He will need to do just that in Shanghai, Basel and Paris—not just to make points but to make a point to his rivals. It is therefore worth comparing this unusual Federer year with another.

When he turned 30 in the summer of 2011, many began to talk of decline. He had not won a Grand Slam in his last six attempts and he had claimed only one title—and at that the modest 250 in Doha in January. For the second straight year he had fallen in the quarters at Wimbledon and for the second straight year he had sacrificed a winning position in the semis of the US Open to Djokovic. He was heading to No4 in the rankings.

After a back-breaking trip to Australia for a Davis Cup tie that would keep Switzerland in the World Group, he bypassed the Asian swing to rest and reassess. What followed, at precisely this stage of the season, was a remarkable resurgence: Back-to-back titles in Basel, Paris and the World Tour Finals continued into 2012 with semis in Doha and Australia and three more consecutive titles.

By the time he reached the US Open last year, he had accumulated nine titles, an Olympic silver medal and an 80-8 win-loss run in 12 months. Only once in his career had he played more in the same time-span—in his record-breaking, 12-title 2006 season.

Even so, the remainder of 2012 was almost as impressive: quarters at the US Open, semis in Shanghai, runner-up in Basel and London—plus two Davis Cup wins.

Some excuse, perhaps, for the trimmed schedule, back injury, losses, and lapses in concentration of 2013. As he reminded the media this time last year:

“I have a lot on my plate. I have so many things going on in my life…I have to go round by round, year by year… you know, I’m not 23 any more, so I have to manage my expectations.”

The expectations of this father of twins and president of the Player Council will include qualification for London—which should be well within reach if he remains injury-free though Shanghai, Basel and Paris. And while he may not, at the start of the year, have expected to friend Wawrinka alongside him, it would undoubtedly be one of the happier twists in an unusual Federer year.