In Roger Federer, Basel claims not just an ambassador on the international stage but a man entirely in character with his city 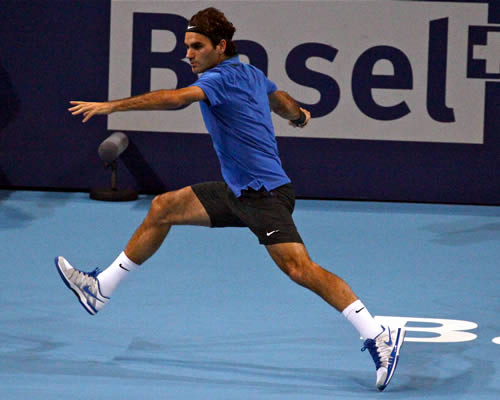 Basel is a city that feels no need to shout about itself.

Sitting astride the Rhine, it rubs shoulders with the French and German borders, an urbane outward-looking city, but exudes a conservative civic pride.

Here, old cobbled squares host funfairs—though not too late—and outdoor markets—but of a very traditional kind. And though its historic heart is treasured, this is not a place set in aspic—its new architecture is as bold and beautiful as its old. It may be affluent, but it feels lived-in as only hard-working cities do.

Cosmopolitan, multilingual, confident Basel does, in short, seem to have it all—only to claim as its own the best of all tennis players, too.

In Roger Federer, Basel claims not just an ambassador on the international stage but a man entirely in character with his city. Self-assured, at ease with all-comers, proud of his roots and his achievements, traditional but open to change: He has Basel written through him like letters through a stick of rock.

He has talked of the pleasure he feels in walking his home-town streets without undue attention. The city may boast of their son to the outside world but, just like any parent, it will brook no airs at home. And Federer has tasted just a little parental displeasure of late.

It began last October, after his 13th appearance at the Swiss Indoors 500. He lost out on a sixth title in what was his seventh consecutive final, but the match also marked the end of Federer’s long contract with the tournament, and soon there were rumours that he was seeking a higher financial stake before agreeing to a new contract.

Discontent was stoked in some parts of the Swiss media by references to Federer’s lack of commitment to the Davis Cup—even though he had played both ties in a packed year that included London 2012. But then the facts of Federer’s Davis Cup record are frequently misrepresented: Only three current players, Lleyton Hewitt, Jarkko Nieminen and Jurgen Melzer, exceed his 58 matches.

Comments by Basel tournament director, Roger Brennwald, reported in Tages Anzeiger, further fanned the flames: “We will do everything to ensure Roger Federer keeps playing at Basel. But we do not have inexhaustible possibilities. Maybe we can no longer keep up. Not everyone can afford a Rolls-Royce.”

Federer, though, contended that money was not the issue: “If I was going only after money, I would have made many other decisions, played throughout Asia. I have always given priority to Basel. I have already helped the tournament a lot. Because of that the onus is more on him than on me.”

And of course Federer holds a strong hand: The success of the tournament—and this year’s final weekend is already sold out—owes much to his long-standing participation.

His first appearance was as a 17-year-old in 1998—he lost his opener against Andre Agassi—and he has played ever since unless sidelined by injury as in 2004 and 2005. He won in 2006 and reached every subsequent final and a total of five titles.

However, when Federer launched a 2013 schedule that did not include Basel, it was put down to the still-unresolved contract, though his manager, Tony Godsick, explained that Federer needed to become very selective if he was to extend his playing career.

The length of Federer’s playing career is something that his home crowd understands better than most after a 13-year Basel stretch, but with the concertinaing of the indoor swing through the Shanghai Masters, Basel, the Paris Masters and the World Tour Finals, the schedule has become still harder for any player to sustain. Indeed Federer was forced to pull out of his Paris title defence after last year’s Basel final.

In such a scenario—a desire to play at the highest level but with a 31-year-old body to protect and a family to consider—what were once givens for Federer might no longer be so. Perhaps Basel really was one demand too much.

Yet still he talked only of excising Miami and the Davis Cup when asked about his schedule in Dubai and, as here, Rotterdam: “Not playing Miami and Davis Cup gives me a lot of possibility, being able to plan down to the day, which is really important to me now with family…I have to take decisions that work for my career.”

He has been true to his word, spending much of his current seven-week absence in Switzerland—from where he also confirmed that he would return to Basel in October.

Talking a fortnight ago to Rene Stauffer at Tages Anzeiger, he said his participation had never been doubt, only the nature of the contract:

“It was always certain to me… I’ve always played in Basel, in all the years when I was not hurt. Everyone knows how much the tournament means to me, and that’s always the case. [A contract] was not necessary. I can play in Basel without any contracts or agreements and I am doing it.”

His decision—and comments about it—will not doubt worry the organisers of Shanghai and Paris, the events most at risk from his decision:

“There are many tournaments I’ve often missed because of the Swiss Indoors, this is nothing new. Although I also would like to go to Asia or Paris, you have to set priorities, and Basel has always been one of my priorities.”

You can, it seems, take the man out of Basel but you can’t take Basel out of the man.

This time, though, Federer will not be bound by long-term commitments to the tournament nor burdened by as many sponsor or media obligations—which might explain the unguarded comments from Brennwald at the Swiss Indoors press conference this week, where he announced the signing of Rafael Nadal to this year’s tournament.

“We have made an offer to [Federer], which he refused. We have submitted a second offer, to which he has not been replied…

“We do not pay a seven-figure salary, and we have to work with deadlines…We had no response from him before learning in the columns of Tages Anzeiger of his intention to play.” By which time, Brennwald had signed up Nadal.

Another part of the negotations also irritaed Brennwald: “We always had to go through his agent Tony Godsick. I can no longer reach Roger on the phone… We live within a few 100 metres of each other, but we can’t talk face to face… I can contact Djokovic or Murray if I want. I have spoken personally with Nadal. But with Roger it is not possible.”

It’s another sign, perhaps, that Federer is growing more protective of his time and his career. In appointing long-term business associate and friend Godsick as his manager after his contract with IMG expired, he chose someone willing to keep negotiations with tournaments, sponsors and media at arm’s length.

It has been effective—making contact with Federer has rarely been harder—but has clearly irritated those used to direct negotiation.

So Federer will, as he has always done, support his home-town tournament to the delight his home-town fans, despite no huge contract and despite facing one of its toughest ever fields: last year’s champion Juan Martin del Potro as well as Nadal.

On the broad stage, he will continue to pack out press conferences in several languages, negotiate for his fellow players at ATP council meetings, make time for his fans, and make money for his Foundation. But after a dozen years of being every tournament’s darling, he may feel he’s done enough hard yards to earn the right to pick and choose where, when and for how much he plays.

So Basel should be proud that, like the city itself, he has looked outward but still chosen home.