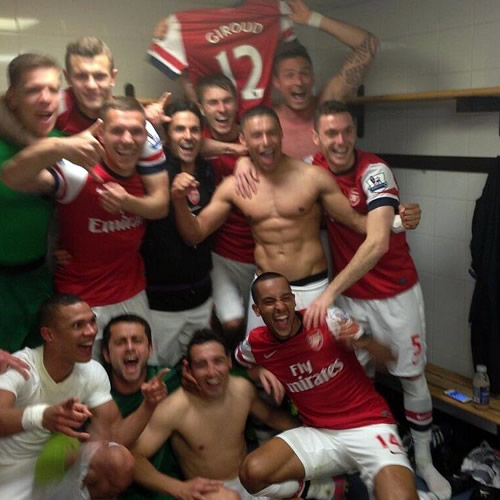 Gareth Bale netted a late stunner to hand Tottenham a 1-0 win against Sunderland but it proved insufficient on the final day of the top-flight campaign, with Spurs having to settle for a Europa League spot again.

The rest of the league was also in action, as Manchester United played out a thrilling 5-5 draw at West Brom and Jamie Carragher ended his playing career with a 1-0 Liverpool win over QPR.

Here is a selection of our favourite tweets from the professionals, both past and present and in chronological order, after what was an entertaining climax to the Premier League season.

Former Arsenal defender Mikael Silvestre (‏@IamMSilvestre) can’t believe the quality of Gareth Bale’s goal: “Something of Kobe Bryant in Bale’s goal! Just give him the ball and he’ll produce. What an effort! #EPL Could we give a fourth spot champions league to Gareth Bale alone ? How much is Koscielny’s goal worth ? #AFC #EPL”

Tottenham legend Gary Lineker (‏@GaryLineker) appears a little bitter: “Arsenal hang on and win a trophy for the 16th season in a row.”

Gunners legend Bob Wilson (‏@BobWilsonBWSC) is glad to see the Gunners prove the doubters wrong: “Amazing #AFC to make a mockery of the #MOTD team predictions earlier this season.”

Marseille midfielder Joseph Barton (‏@Joey7Barton) wonders if Everton can finish ahead of Liverpool next season: “Everton finish above Liverpool, might be the last time we see that in a while… #moyesbigshoestofill”

Fulham defender John Arne Riise ‏(@Johnariise3) is pleased to end the season with a win: “Boom boom boooooom!!! What a great finish to the season. Clean sheet, three goals and three points! Thanks to the travelling fans:) Awesome!!”

Manchester United defender Rio Ferdinand ‏(@rioferdy5) can’t believe the result between West Brom and the Red Devils: “5-5…..what a mad result! Let’s be honest the boss was never going out with a boring 0-0!!”

Aston Villa defender Ron Vlaar (‏@RonVlaar4) is glad a goal made up for his poor display in a 2-2 draw at Wigan: “My worst game of the season, one good touch saved me! Thanks to the fans for the support this season, looking forward to the next one. #UTV”

Stoke defender Robert Huth ‏(@robert_huth) defines what a successful season is for him: “No broken nose and only 28 stitches this season, a definite positive!”

West Ham striker Andy Carroll (‏@AndyTCarroll) hails Kevin Nolan for his hat-trick in a 4-2 win over Reading: “Great game today buzzing for the skip getting a hat-trick and enjoyed every minute of being at West Ham!!”

Manchester City forward Sergio Aguero (‏@aguerosergiokun) is disappointed to lose 3-2 to Norwich City: “It’s the end of a season that didn’t go as expected but gotten important lessons and learned much.”

Everton defender John Heitinga (‏@Johnheitinga) hails the club’s fans after a 2-1 defeat by Chelsea: “Unfortunately we didn’t beat Chelsea. All fans of #Everton thanks for a year of wonderful support! You are the Champions of the PL. #COYB”

Finally, Stoke striker Michael Owen (‏@themichaelowen) pays his regards to the other legends retiring today: “Congratulations to Carra, Scholesy and all those players retiring today. Legends of the game.”