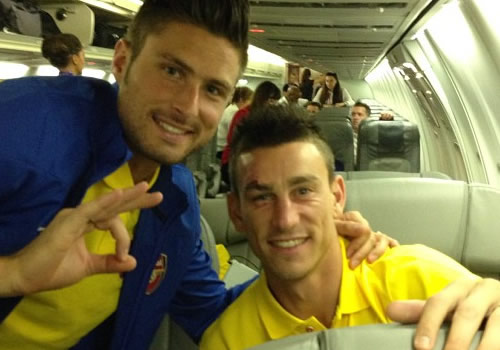 Javier Hernández struck a second-half winner as Manchester United were 1-0 winners against Liverpool in the League Cup third round at Old Trafford.

Elsewhere, Fulham, Newcastle United and Stoke all secured comfortable wins, while Arsenal beat West Bromwich Albion on penalties to set up a fourth-round tie against Chelsea.

Here is a selection of our favourite tweets from former managers, ex-players and the current stars, in chronological order, to all of Wednesday’s League Cup action.

Ex-Liverpool midfielder Dietmar Hamann ‏(@DietmarHamann) isn’t too impressed with Jose Enrique’s marking: “That’s when United are dangerous. You think you are on top and they hit you. Plenty of time to come back.”

Liverpool institution Kenny Dalglish ‏(@kennethdalglish) has wise words to say after the loss: “Will win more than lose if there are repeat performances of that quality.”

Injured Gunners striker Lukas Podolski (‏@Podolski10) is thrilled to see his precious Arsenal into the next round: “Yes !!! Next round well done guys haha!! #afc #arsenal #cup”

Manchester United midfielder Tom Cleverley (‏@tomclevz23) enjoyed the match as a fan and was impressed with the performance: “Great response from the lads and the fans tonight. Get in there!!!”

Former Liverpool captain Phil Thompson ‏(@Phil_Thompson4) reckons the Reds had the chances to overturn the deficit: “Sloppy defending for the United goal but still had enough chances to win the game.”

Ex-Reds striker Neil Mellor (@NeilMellor33) sees the positives: “Disappointing to lose to another goal from a corner. Encouraging signs with Suarez back and thought the displayed deserved more.”

Stoke City goalkeeper Thomas Sorensen (@TSorensen1) thanks the travelling Potters: “Good 2-0 win tonight and thanks to all the Stoke fans who travelled. Amazing support as always.”

Hull City midfielder Tom Huddlestone (@TomHuddlestone6) will be returning to his old stomping ground: “Interesting draw in the cup haha could have called it before the draw!!”

Swansea goalkeeper Gerhard Tremmel (@GerryTremmel) might not sleep well after a disastrous performance from the holders: “So what to say about this performance…. Need to sleep a night first.”

Finally, Arsenal midfielder Aaron Ramsey (@aaronramsey) is excited for the Gunners’ fourth-round clash against Chelsea: “Well done lads, into the next round of the League Cup. Chelsea up next in the competition, not a bad draw.”