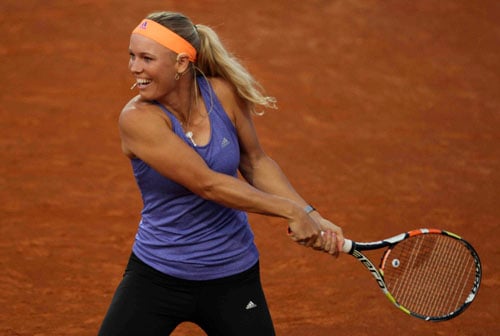 The big names in Paris had tumbled early. No1 seed and reigning US Open champion Angelique Kerber left open the door for Nos2 and 3 to take the No1 ranking, whichever of them made it to the title match.

An oldie but goldie French champion, Francesca Schiavone, drew the defending champion in her opener: It was no contest.

Briton Johanna Konta, along with fellow top-10 seeds Dominika Cibulkova and Agnieszka Radwanska, hoped for much here, but could not compete.

And as the fourth round funnelled towards the quarter-finals, it was in the hands of the few remaining former No1s and Grand Slam champions to stand up and be counted. But with each match played through a cool Sunday, the door opened ever wider for a new name to lay hold of a Grand Slam title for the first time. And many of them were passing personal milestones to keep their hopes and dreams alive.

Unseeded 19-year-old Jelena Ostapenko had yet to play a seed until she faced the in-form French finalist Sam Stosur. She Latvian came from a set down to reach her first Major quarter-final after never winning a main-draw match at Roland Garros before.

After a seven-year wait, Caroline Wozniacki reached the quarters here by beating former champion Svetlana Kuznetsova. Wozniacki has not reached the second week here since she was a teenager in 2010, though on paper, she would become perhaps the best qualified woman remaining in the draw—a former No1 and with two Major finals to her name, but both in New York.

Although seeded No2, Karolina Pliskova was not a name on many people’s lips as a possible second-week threat, having won just two matches in Paris before. Yet she made the fourth round with very little trouble. She did not face a seed, and would not need to face one to reach the quarters. She would instead face the petite woman from Paraguay, Veronica Cepede Royg, who had just one previous Major match-win in her career, but now had won three and beaten had No16 seed Anastasia Pavlyuchenkova.

No5 seed Elina Svitolina, in contrast, was a name that had been bandied about as a possible titlist following a ground-breaking season of four titles, including Rome just ahead of Roland Garros. Still only 22 years old, she was a quarter-finalist here in 2015, but had yet to make a bigger move at any of the Majors. Like Pliskova, she had progressed without playing a seed, and would now face qualifier Petra Martic.

To add another upbeat dimension to proceedings in Paris, the French crowd was guaranteed at least one home player in the quarter-finals as Caroline Garcia more than fulfilled her seeding to reach the fourth round—her best run at any Major thus far—and would meet the unseeded Alize Cornet, who put out both No20 seed Barbora Strycova and No9 seed Radwanska.

Still, there were two big, big names left in the draw who had ridden the Grand Slam winning experience into the fourth round, and were favourites to go at least one step further.

The first, Garbine Muguruza, No4 seed and defending champion, had not had it easy: Schiavone in her opener, the fast-rising 21-year-old Anett Kontaveit next, then No27 seed Yulia Putintseva, but now she had one of France’s own daughters, No13 seed Kiki Mladenovic.

Mladenovic arrived here with final runs in Madrid and Stuttgart, and equally strong results on the hard courts. From a ranking of 45 at the start of 2017 to a current 14, she had already survived two three-setters, and was about to survive a third against the woman she had last played over two years ago. Back then, Mladenovic beat Muguruza in two tie-breakers. This time, she would need two hours to complete her 6-1, 3-6, 6-3 win and it took her to her first Roland Garros quarter-final.

The news spread like wildfire across the site along with the cheers. The Philippe Chatrier crowd rose as one to roar their approval during their own significant match.

Their match was significant because it saw the only remaining Grand Slam champion in the draw fighting for her place in the quarters against Mladenovic.

Venus Williams will turn 37 later this month, yet still played here as seeded No10. The red clay of Paris was never a particularly happy hunting ground for the elder Williams sister: She made her only final here a full 15 years ago. Yet her form had looked outstanding this year, and with the absence of former champions such as sister Serena and Maria Sharapova, and the loss of other big names, she looked in fine fettle.

Her problem was one Swiss woman who happened to halt her here last year, in the same round and in straight sets. For Timea Bacsinszky does like the clay, and the No30 seed was targeting her third quarter-final in Paris in as many years.

This had the makings of another sweep for the Swiss, who led 5-1 in the first set, only for Williams to pound her way back with six straight games to take the set, 7-5, after an hour’s battle.

But the nimble Bacsinszky, with the kind of slice and disguise to leave an opponent rooted, was playing some tactically brilliant tennis in the second set to break twice and then hold to love, 6-2.

Williams dug in hard at the start of the third, but after a long struggle, conceded the break, and repeated sliced drop-shots from the Swiss broke Williams down. The crowd were now firmly behind the French-speaking Swiss too, and after a long, tough hold for a 4-0 lead, she went on to break the American with one more killer drop-shot for the match, 6-1.

That put out the last remaining Grand Slam champion in the draw, and ensured that all eight quarter-finalists would be pursuing their first Major title for the first time since the Australian Open 1979.

Perhaps it will be Bacsinszky herself, and after her comeback from near-retirement in 2013 following a year and a half away from the sport, that would be a fairy-tale result.

But then a home victory would be the first since Mary Pierce in 2000, another fairy-tale ending.

The safe money, nevertheless will be on Simona Halep, as it has been since before the tournament began. She made the semis in Stuttgart, the final in Rome, won in Madrid, and reached the final here in 2014.

And victory here would not only be her first Major title but take her to No1. And that is some incentive.