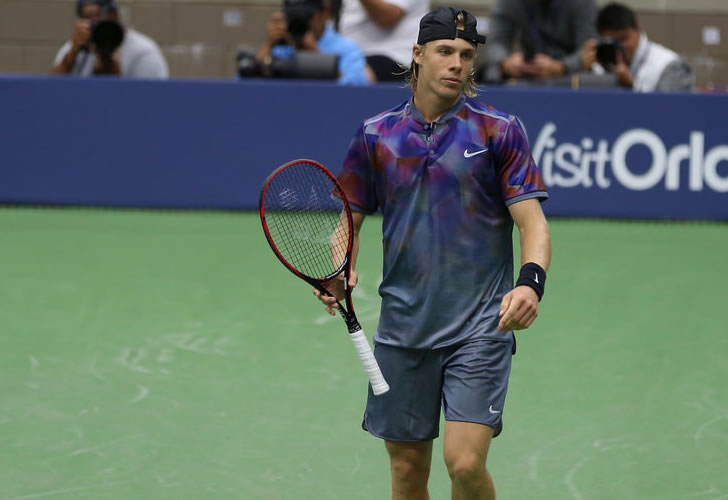 It has become one of the hot topics of this year’s men’s draw at the US Open.

Aside from the early flurry of headlines at the absence of former champions Andy Murray, Novak Djokovic, and Stan Wawrinka, and the withdrawal of fellow top-seed players Milos Raonic and Kei Nishikori, there was not a little debate about the balance of the ensuring draw.

The two most decorated Major champions, the winners of all three Majors so far this year, and the two men vying for the No1 ranking during the tournament, Roger Federer and Rafael Nadal, were drawn into the same half. When No2 seed Murray pulled out, the rules dictated that Marin Cilic be moved into Murray’s No2 slot.

But as the draw unfolded, the imbalance became increasingly pronounced, especially when Cilic was beaten in the third round by No29 seed Diego Schwartzman.

So while Federer and Nadal, along with the only other US Open champion, indeed the only other Major champion in the draw, Juan Martin del Potro, made their way to the fourth round, the names tipped to take advantage of absences in the other half of the draw—No4 seed Alexander Zverev, No8 Jo-Wilfried Tsonga, and No10 John Isner—all lost unseasonably early.

And it all meant that, by the time the last eight in this half played for a quarter-final place, a first-time Major finalist was already guaranteed. Indeed only No28 seed Kevin Anderson and No16 seed Lucas Pouille had reached the quarters at the US Open before. Only No17 seed Sam Querrey had made any Major semi, at Wimbledon this year.

As for Schwartzman, he had made just his first Round 3 run at Roland Garros this year, while the unseeded Paolo Lorenzi, who at the age of 35 had reached a career-high ranking this summer, was the oldest player in the Open era to reach a Major fourth round for the first time.

But the man in this half who had captured the imagination more than most was the Canadian teenager Denis Shapovalov. The charismatic left-hander lit up his home tournament in Montreal with a semi-final run last month, beating both Rafael Nadal and del Potro. It made him the youngest player to reach a Masters semi-final since 1990, and had he reached his career-high 67 a week sooner, he would have been straight into the main draw here by right.

As it was, he came via the arduous qualifying route—three rounds and seven matches—but this athletic young player showed no signs of flagging. He did not drop a set in making the third round via No8 seed Jo-Wilfried Tsonga, and was dominating Kyle Edmund when the Briton retired at the start of the fourth set.

He had, though, played a lot of tennis since the grass season. He won one Challenger title and reached the semi of another, all before Montreal. Now he was playing his seventh match in New York, and against the resilient Spaniard, Pablo Carreno Busta.

To make matters worse, the wiry No12 seed had a lot fewer matches in his legs. After making his first Major quarter-final at Roland Garros, he missed Wimbledon with an abdominal injury, and played just six matches in the hard-court run-in to New York. And once here, that unusual bottom-half draw had done him a lot of favours. He had played three qualifiers in a row—and perhaps unsurprisingly, had not dropped a set. Now he played a fourth qualifier in Shapovalov.

For the third time, though, the teenager’s match was scheduled on Arthur Ashe, for clearly the New York crowds had taken him and his big-time tennis to their heart. This time around, the arena was almost entirely one-sided, such that the mild-mannered Carreno Busta had to become accustomed to applause for his errors.

But they were treated to a thrilling match. Both men fought off break points early on, but it was Shapovalov’s attacking game that got the first reward and a 4-2 lead. He served for the match at 5-4, only for Carreno Busta to get the break back, and they headed to a tie-break. Shapovalov would rue not taking advantage of three break points in the 11th game, for Carreno Busta fired up superbly to race to a 6-1, and sealed the set, 7-6(2) after 58 minutes.

The second set was just as compelling, with the expressive and attacking tennis of the teenager up against the precision, baseline game of the Spaniard. Carreno Busta broke first, and roared a forehand winner down the line for a 5-2 lead. Yet now it was his turn to feel the pressure of serving out a set, and Shapovalov bounded into the net, picked off two smashes and broke, to the delight of the crowd. It would, then, head to another tie-break—and sadly for the Canadian, with a near identical result.

Carreno Busta was clutch on serve, placing it with variety, spin and pace to draw the errors, and at the same time patient enough in the longer rallies to force Shapovalov into going for too much. It worked a treat: the Spaniard nabbed the set, 7-6(4)—again in precisely 58 minutes.

Shapovalov took a sensible breather, a chance to regroup, and it worked. He came back to hold off break points with a great backhand volley—and his one-handed backhand is a flamboyant crowd-pleaser of a shot in all its iterations. He then broke to love and held to love, 3-0, but a double fault on break point and they were level again, 3-3.

It stayed that way, with the youngster grittily staving off 0-40 in the ninth game, and yet again it would got to a tie-break, and a near carbon-copy of the first two, with the increasingly clutch and confident Spaniard reeling off fine one-two points to reach 6-1. Shapovalov began to look weary, but hung in for his last two serves. However this would be the Spaniard’s day, 7-6(3)—remarkably in another 58-minute set.

It is rare to hear a player other than a Federer or a Nadal or a Djokovic—or an American here—receive a standing ovation after a loss, but that is just what Shapovalov enjoyed. He said afterwards that this would be his abiding memory of his very first time in the US Open’s main draw.

“Honestly, I think it was the sound, the roar of the crowd when I put my bags down and I went to applaud them. They were all screaming. It was so loud, and it was a great moment for me.

“It really has a special place in my heart, and now New York for sure, it will always have a special place for me. Hopefully I can come back here for many more years and just try to do some damage.”

Well he has done plenty of ‘damage’ this year, and will move to the edge of the top 50 next week from 250 at the start of the year. He is also up to No3 in the #NextGen Race to Milan, and the youngest in the top 20 there, too.

But on this occasion, it was the 26-year-old Carreno Busta who continued his career-best season. This year, he won his third title in Estoril, was runner-up in Rio and made his first Masters semi in Indian Wells. And this win has taken him to his second Major quarter-final and to 11th in the Race to London. He could hardly believe it himself.

“It’s tough to describe it. It was incredible match. It was the first time I played on Arthur Ashe [in singles]. Is incredible. There is a lot of noise, and you think the people are behind you, but I just tried to be focused on the match. At the beginning, I was a little bit scared, maybe a little bit nervous.

“It was very tough, because three hours, three sets, three tiebreaks, but of course it was an amazing victory for me. Now I’m in the quarter-finals again of a Grand Slam, first time here in US Open, and will try to continue.”

His next match will be against Pouille or Schwartzman—a first encounter for both.