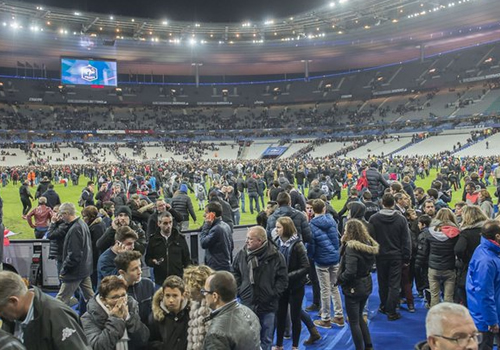 The scenes at the Stade De France after Friday's game Photo: Twitter

Germany were forced to stay at the Stade de France overnight following the deadly terrorist attacks in Paris on Friday.

There were a number of explosions near the arena, which could be clearly heard during the game, as France played Germany in their football friendly.

Fans were told to gather on the pitch after the game had finished as French police confirmed that there were two suicide attacks and one bombing near the stadium.

Joachim Low, whose Germany side were beaten 2-0 during the game, admitted that his players were in a state of shock after the match.

“We are all shattered and shocked. For me personally the sport takes a backseat,” Low told ARD.

“We will now advise what to do. We are baffled at the moment. When I heard the bang I could imagine what that would be.”

Oliver Bierhoff, Germany’s team manager, added: “There was a big uncertainty, a big fear and a strange mood in the locker room.

“It was noticeable how shocked the players were. They picked up their phones right away to inform themselves or call home.”

The German team and staff stayed inside the dressing room inside the stadium overnight while they waited for information on how to get to their team hotel.

However, they then decided to depart directly for Charles de Gaulle airport early on Saturday morning, escorted by police, and are expected to land back in Frankfurt by noon.