Paris Masters 2012: David Ferrer claims his seventh title of the year with a 6-4 6-3 victory over Jerzy Janowicz in the final 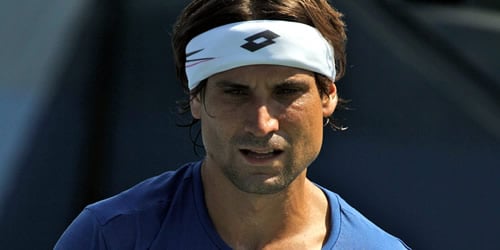 It has been a long time coming, and is long overdue for one of the biggest hearts in one of the most compact men in tennis: David Ferrer has won his first Masters title after a dozen years on the tour.

What’s more, from a career that first flowered on the clay of Spain, he achieved his greatest triumph on the fast, indoor hard courts of Paris.

The 30-year-old has been one of the most respected players on the tour since he began to win titles in earnest beyond the clay circuit at which he had first shone at the outset—in 2007. That was the year he broke into the elite group for the first time, played in the Masters Cup, and reached the final.

Still he was not done, improving his game at the front of the court, developing a bigger serve and becoming possibly the fittest man on a tennis court.

He was rewarded in 2012 with perhaps his best year ever. By the start of the final Masters of the season, he had accumulated six titles to equal tour-leader Roger Federer and, by the end, he had not only won his first Masters title—the only man since Paris two years ago not called Federer, Novak Djokovic, Rafael Nadal or Andy Murray to do so—but he had overhauled the Federer title total and overtaken Djokovic in the number of match wins this season, now 72.

This was also a year in which he posted better Grand Slam results than ever before, reaching at least the quarters of all four for the first time and making the semis of the clay French and the hard US Opens.

The door opened early in Paris for the Spaniard who has always played second fiddle to compatriot Nadal, who happened to be near unbeatable on clay. Ferrer also coincided with the outstanding hard court careers first of Federer, and then of Djokovic and Murray—the latter halted him in the finals of the Shanghai Masters last year.

The start of this particular Masters saw a culling of those four men from the draw: Nadal missing injured, Federer withdrawing for personal reasons, and Murray and Djokovic losing in their early matches.

Fresh from a title in Valencia, Ferrer beat some formidable opponents in Stan Wawrinka and Jo-Wilfried Tsonga, but finally faced the star of the week. The fast-rising young Pole, Jerzy Janowicz, not only came through qualifying but beat five top-20 players on the bounce, including two men now preparing for the World Tour Finals in London, world No3 Murray and No9 Janko Tipsarevic.

In the end, those numerous matches drained the big-serving, creative new talent, though Janowicz kept pace with Ferrer for most of the final. He missed a chance to break in the ninth game, only to have Ferrer pounce in the next and take the first set 6-4.

In the early stages of the second, the energy levels still remained high and Janowicz won an early break in a long third game. But the Ferrer grit immediately responded and he ran Janowicz ragged for 10 minutes to finally earn the break back.

There were more break chances for Janowicz in the fifth, but Ferrer simply would not be denied. He turned defence into attack in the sixth to take another break and won the set and a famous victory, 6-3.

Certainly fitness, resilience, persistence and speed have played their part in taking the modest and self-effacing Ferrer to his deserved break-through. But that is to underplay his smart tactics, his willingness to revise and refresh his game to inject more pace, more variety and more attack, and a package of skills that have turned his shorter-than-average physique into a formidable weapon.

It has, too, become one of the most heart-warming tennis stories of the year, one that may, come 2013, see one more reward if Ferrer posts some decent results in London and then in Melbourne. He could, for the first time in his career, emerge from the shadow of Nadal to be the top-ranked Spaniard.

It is right, too, to acknowledge the achievements of the young man who started the year ranked 221, entered this tournament at 69 and will break the top 30 on the back of this final. Janowicz showed his promise on the big stage in his Davis Cup appearance three years ago. He lost against Murray but showed then the skills and physique that shouted of his great prospects.

He has ended the year exhausted—little wonder after eight matches against the sternest of competition in Paris—but what makes his arrival particularly welcome is the happy combination he possesses: a varied game that marries power with touch, and a winning personality, as demonstrated in his closing words of the season:

“I was actually exhausted almost. I’m only human, and I’m still happy about this final.