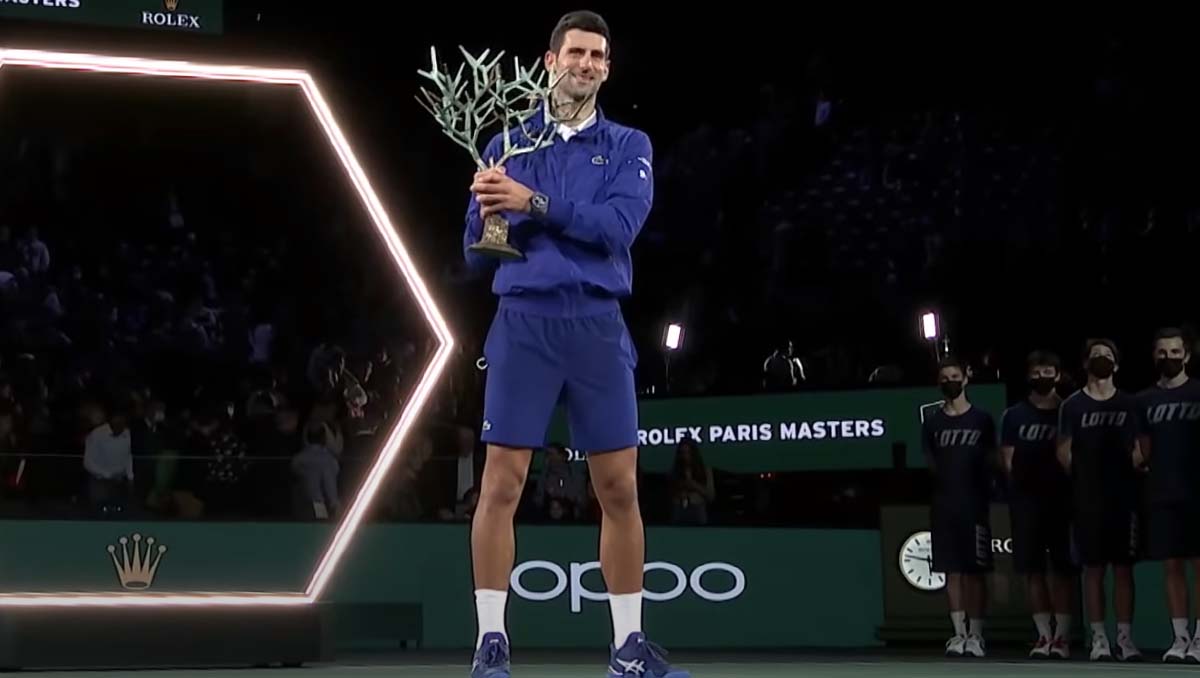 Were it not for world No2 Daniil Medvedev, Novak Djokovic would have signed, sealed and delivered one of rarest measures of tennis greatness: the Calendar Grand Slam.

He won the first three Majors this year, and in doing so, became the only one of the ‘big three’ to hold two titles at all four Majors.

Come the US Open, he edged to the final, within touching distance of making history. He made it past No4 Alexander Zverev, but it took five gruelling sets, and after the extraordinary physical effort of winning three Majors, and playing six matches at the Tokyo Olympics, too, it proved too much to beat the wily, rangy, smart world No2.

How timely, then, that these two should face one another in the last month of 2021, this time in a best-of-three final.

For the Rolex Paris Masters had the blockbuster it wanted, a final showdown between five-time champion Djokovic and defending champion Medvedev, and while Djokovic could not out-do the record he had already notched up this week—an unparalleled seventh year-end No1 trophy—there were other records on the line.

Perhaps most significant, in the year that Djokovic had drawn level with Roger Federer and Rafael Nadal with 20 Major titles, he could take back the record for most Masters titles that he currently shared with Nadal: The Paris trophy would take him to a new record 37 Masters titles.

However, if he could avenge his US Open loss to Medvedev just a week before a potential clash at the ATP Finals, that would be the cherry on the icing on the cake. After all, Djokovic has another record in his sights in Turin: to equal Federer’s record six titles at the season finale.

The Russian, though, had certainly hit a rich vein of form in the latter half of the year, winning the Toronto Masters as well as the US Open, and he even slotted in a win at the Laver Cup before heading to Indian Wells. But in Paris, he had played one match more than Djokovic, and had playing considerably more tournaments this year.

And as Medvedev pointed out before the match: “Against some players you feel like maybe you won a few months ago and you can gain confidence from this. Against Novak you know that actually he is going to want to beat you even more when you beat him.”

The opening couple of rallies set the tone for the match, chess-like in their baseline variety, and in both, Djokovic made the first error. A backhand pass, and Medvedev had three immediate break points.

Djokovic gamely rushed the net again, this time scoring, and an ace saved the second point, but then he put a drop-shot into the net: Break.

The Serb’s next service game was far cleaner and more proactive: a couple of net attacks and a hold. He kept up the attack with some blistering baseline strikes, and this time, pulled off a drop-shot winner, leading to a love break: 2-2.

The Russian was already breathing heavily, dragged on a piece of string along the baseline, as Djokovic switched direction with cross-court and down-the-line precision.

Medvedev had to fight fire with fire, a serve and volley winner to save break point in the sixth game. He then went after Djokovic, drawing errors for 0-40, and he converted the third with a winning drop reply of a drop attempt from Djokovic.

He needed this time to hold on to his advantage—far easier said than done against one the sport’s greatest returners. But he managed it from deuce, 5-3, and served out the set, 6-4.

Djokovic got off to better start in the second, four first serves, a love hold. He was finding the lines and corners, then breaking up the patterns with a short ball and reactive lob. It was a purple patch from the Serb, and Medvedev did well to hold.

A stunning baseline rally, with both hitting the extremes of the court, drew an error from Medvedev for break point in the fourth game, and another gave Djokovic the break. It felt pivotal, for Medvedev was not playing poorly, but Djokovic was serving at a near-perfect level, had made six winners from seven net plays, and made only four unforced errors.

Medvedev needed at the very least to try and force Djokovic to serve it out, so that he could serve first in the third set, and a backhand winner did the job. The Russian then pressed for the break back, had two chances, and a stunning reactive volley earned a third. He appealed to the crowd for support, though in truth he looked exhausted, and Djokovic saved it.

He too appealed to the crowd—unnecessarily, because his fans had been vocal from the outset, and now roared him to the second set. A long, stunning game was finally sealed by a Djokovic ace, the 31st winner of the set from these two men, 6-3. There had been twice the winners to errors which, given the extraordinary defence of both men, was hard to believe.

Their outstanding level extended into the third set, now with three times the winners to errors, and Djokovic increasingly made them at the net. The first break point came in the fifth game, and Medvedev missed the corner by the smallest of margins. Djokovic led 3-2, and it released the last shackles from the No1, as he made a love hold on the dot of two hours.

The five-time champion broke again, and while Medvedev managed to pull one break back when nerves briefly got to Djokovic, the Russian could not find any more. The final rally on break point demonstrated the scale of the task—a gruelling, pounding exchange sealed with yet another Djokovic winner, 6-3.

The six-time champion walked to the back of the court, where his family was waiting to embrace him. In sharp contrast, Medvedev could only sit, head in hands, to wonder what he could have done better. The answer was: not a lot.

It was a match worthy of a Masters final, for sure, and certainly whets the appetite for what may come in Turin. For now, Djokovic becomes the master of Masters, taking the lead over Nadal with 37.