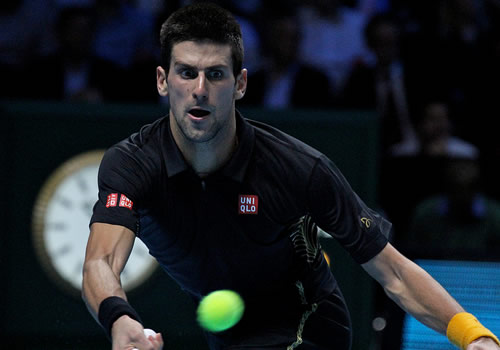 Already in Paris, some gauntlets had been firmly thrown down by one ATP World Tour Finals quartet to the other.

World No1 Rafael Nadal put the last man to qualify for London, Richard Gasquet, firmly in his place, losing only five games in just over an hour to advance to the semis.

Novak Djokovic, taken to the limit in both 2013 meetings with Stan Wawrinka, both in Grand Slam five-setters, made sure that the Swiss did not get another confidence-boosting result. He too allowed his opponent only five games in a sizzling quarter-final display that showed he was not just focused on the WTF trophy but on snatching the No1 ranking from Nadal.

Roger Federer, late to qualify for London after a year of confidence-sapping injury and early losses, boosted that confidence with a win over the man who beat him to the Basel title last week, Juan Martin del Potro. The Argentine had won their last three matches, including the one at the WTFs last year, so this was a particularly timely scalp: Federer had this year scored just one win over a top-10 player and one over this year’s London rivals—until now.

And for David Ferrer, standing at a career-high No3 and defending his only Masters title, his fight back from a set down against Tomas Berdych was also significant. Although he won their last meeting at the 2012 Davis Cup final, he lost their previous match, two years ago at the WTFs. It marked only his second top-10 win this year.

The question was, therefore, which of the four would assert their superiority in the Paris semis at this vital stage in the calendar? And it was hard to see beyond the two vying for year-end glory from their places at the top of the rankings.

Nadal went into his semi with a 2,000 point lead over Djokovic and an extraordinary 6,470 lead over his semi opponent, Ferrer. But worse still for the lower-ranked Spaniard, Nadal held a 20-4 head-to-head advantage, including all four meetings this year, and was aiming to reach his 14th final in 16 tournaments this year.

But if Nadal’s form was outstanding, Djokovic’s was looking its equal since their US Open final meeting: a 15-match streak that included the Beijing and Shanghai titles. And as for his points lead over his semi opponent, Federer, it was as impressive as Nadal’s over Ferrer: 6,165.

This would be their 30th meeting and although Federer held the marginal edge, 16-13, the two former Paris champions had not met since the final at the WTFs a year ago—a victory to Djokovic. Federer admitted this week that it was probably just as well they had not met since:

“I prefer to play him now than four months ago…If I had played a few weeks ago or a few months ago, I might have thought that I was not sure. It might have been more difficult. I believe I can win more now…”

And indeed, in the opening set, it was Djokovic who seemed to be fighting for form and concentration rather than his opponent. He could not find his first serve, faced a break point in the opening game, double faulted twice in the third game and watched Federer glide in to make a drop-shot followed by volley winner to break.

Here was Federer finding some of his best tennis of the year, chasing to the net on serve, making drop winners and coming off the better in some fierce forehand exchanges. He raced to 3-1 lead, had a point to break again, and then deuce on Djokovic’s last service game of the set.

However as the set edged to three-quarters of an hour, Djokovic did begin to find some rhythm off the Federer serve and, helped by three errors from the Swiss, earned two break chances at 4-5. It would take four deuces and two more break chances, but Federer resisted the growing pressure to take the set, 6-4.

As those closing stages had suggested, there was little between the two men in errors or winners, but the Federer serving level, at 75 percent, and his 11 points won at the net had made the difference.

Both began the second set nervously, and errors on both sides brought an exchange of breaks. But while Federer continued to make nervy errors, missing a growing number of first serves, the Djokovic confidence and consistency grew.

He leapt on the Swiss second serve to make the kind of reflex cross-court winners for which he is renowned. A double fault from Federer gave Djokovic two break points, and though he pulled it back to deuce, a forehand and then a volley into the net gave the Serb the vital breakthrough. A love hold by Federer at the next attempt was not enough—the Djokovic serving was impenetrable and he took the set, 6-3.

Now the statistics told a different story, one that would accelerate through the third set. Federer’s serve level had dropped to 50 percent while Djokovic had made twice as many winners as his opponent. He surged on, pressuring the kind of errors from Federer that were missing in the first set. The break felt inevitable, and it came in the third game.

Djokovic, having survived deuce in the fourth, became more pumped with each spectacular response to some bold Federer plays—not least in making a lob winner after they exchanged two drops and volleys. He broke again and served out the match, 6-2.

It had taken two hours for the Serb to reach the final—and yes, throw down a gauntlet again to the man he would quickly discover was drawn in his group in London.

Federer said after losing to del Potro in Basel: “I’m a winner type, I don’t take that much the confidence from losing matches.” But in this case, he should. He looked more vital and more resolute in defence in the first half of this match than in many a month. The draw in London has done him no favours—del Potro is also in his section—but he has fired a warning shot across several bows this week.

If the form book almost went out of the window during the first semi-final, it actually soared toward the horizon in the second. Ferrer’s only successes against Nadal in almost 10 years have come on hard courts, though he had also pressed his compatriot hard in Madrid and Rome this year, winning a set at both. And if there is one man who works as hard and is as fit as Nadal, it is the 31-year-old Ferrer—and lest anyone forget, he won his only Masters title on Paris’s indoor courts last year.

It is no accident that he is enjoying a career-high ranking, for here is a man who has strained constantly to improve his game, his serving, his volleying, his aggressive tactics. He used all those skills in attacking the Nadal game like never before, surging to a 6-3 first set in which he won 21 baseline rallies to Nadal’s 11, and all six net points he played.

Ferrer survived a break point in the second game, turned the heat back on Nadal, and broke to lead 3-1 within just an hour. He survived another break chance in the sixth but, serving for the match, Nadal hit back hard to level 5-5.

So often Nadal has come back from behind, but it was Ferrer who had all the resilience, all the bustling energy and determination. He drew a Nadal error in a 27-stroke rally and broke again. This time he served superbly to take a famous victory, 7-5.

Ferrer had been the aggressor and it paid off: 29 winners to 19, and a remarkable 14 points won from 18 at the net. Twitter had been abuzz with the ease of Nadal’s draw in London—but Ferrer may have silenced some of that noise ahead of his rematch with Nadal on Tuesday afternoon.

In the meantime, this 5ft 9in bundle of determination—and not a little courage—may also have opened the door for Djokovic to take the year-end No1.