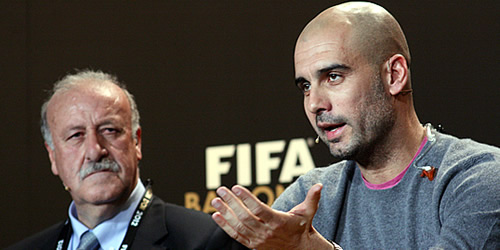 Pep Guardiola has spoken of his respect for Arsene Wenger ahead of Bayern Munich’s Champions League clash against the Gunners.

The Frenchman has recently been branded a “specialist in failure” by Chelsea manager Jose Mourinho due to not having led the north Londoners to a trophy since 2005.

But Guardiola has come out in defence of the Arsenal boss ahead of the last-16 first-leg game at Emirates Stadium on Wednesday.

“My opinion on Arsene is that I have a lot of respect [for him],” Guardiola said. “His teams have his quality and I have to admire the quality of my opponents.

“We are going to play one team that has all the season been up [leading the league], so now they are third or second in the league, but in the beginning [they were] there.

“It is a typical team that always puts in a good performance in the Champions League.

“The last eight, nine or 10 years they have been in the Champions League and they are a special team with [Santi] Cazorla, [Mesut] Ozil, [Jack] Wilshere, [Alex] Oxlade-Chamberlain, [Aaron] Ramsey.

“They always have good midfield players, with combinations. You [we] have to be good in both sides in our defensive movements and try to understand their game.”