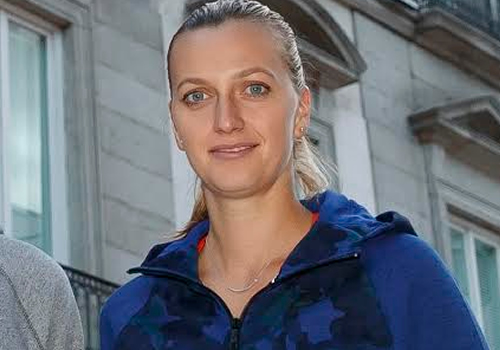 Petra Kvitova is due to make her return at the French Open Photo: Dubai Duty Free Tennis Championships

Even Petra Kvitova’s biggest fans could not have wished for better news as the 2017 edition of Roland Garros gets underway this weekend.

Less than a week after the two-time Wimbledon champion announced that she was preparing to make her return at the All England Club after almost seven months away from tennis following a stabbing attack to her left hand, she has arrived in Paris ready to play.

It was not certain until the very last moment, but her beaming demeanour during practice on Roland Garros’s courts suggested good news, and sure enough, when the main draw was made at midday on Media Day, there she was, back where she had left the tour as the No15 seed.

Little wonder that her press conference was packed when she arrived to talk of her return. Kvitova is one of the most popular figures in women’s tennis, not just with fans but with her colleagues. Last year, she picked up the Karen Krantzcke Sportsmanship Award from her peers for the fourth consecutive year and her fifth time in the last six.

Through the smiles, though, Kvitova could not hide the emotion as she talked about the process of recovery and return.

“I knew this day would come. I’m really happy the dream comes true. I’m here in the draw and I’m playing tennis again. Was a difficult time for me, of course, but I’m happy that I worked through this and I can play tennis.

“I know that my hand is not perfectly ready. It’s still not 100 percent, so we will see how everything goes, but I’m happy that I am able to play again.”

2016 proved to be a year of mixed fortunes for Kvitova in many ways, but no-one could have predicted how dramatically her season would end—with severe injuries to her playing hand after defending herself against a knife-wielding intruder at her Czech home.

The year had already begun slowly for Kvitova after an illness-hit 2015 during which she was diagnosed with glandular fever. By the time she arrived in Indian Wells last year, she had won only two matches in five tournaments, but announced her return to form with a bronze medal at the Rio Olympics.

Come the Asian swing, she began to look more like the former world No2 that she is, won her first title of the season in Wuhan—beating No1 Angelique Kerber and then No5 Simona Halep in the process. She finished the year with victory in Zhuhai, having piled up 16 wins from 18 matches—and the Czech Republic then won the Fed Cup for the fifth time in six years.

But even then, ill fortune dogged her—a stress fracture in her foot—and the brighter news that she was switching her coach for the 2017 season, was trumped before Christmas by her Facebook announcement:

“Today I was attacked in my apartment by an individual with a knife. In my attempt to defend myself, I was badly injured on my left hand. I am shaken, but fortunate to be alive. The injury is severe and I will need to see specialists, but if you know anything about me I am strong and I will fight this.”

She underwent almost four hours of surgery, as doctors repaired tendons in all five digits of the left hand as well as two nerves. Her specialist said:

“If the rehab process goes well, Petra should be able to grip a racket for the first time (but not play tennis) at three months. The best-case scenario is that Petra will be able to return to the tennis court after six months.”

That she is not just back but back at one of the most demanding tournaments of the year—and she reached the French Open semis in 2012—is testament to the extraordinary progress she has made.

“At the beginning, I had this hand in a splint, and even then I was practising every day, always putting the splint away and trying to make this scar softer. After two weeks, I took off the splint, and I started to rehab actively. So it was just easy, small moves with my fingers. It was not really a big deal.

“I can’t still move them fully, but every kind of millimetre made me happy… and I held a racket for the first time end of March.”

She clearly does not have high expectations of her run here:

“Of course, the hand doesn’t have that power and the strength yet, but I’m working on it. Hopefully one day everything will be perfect. But we never know.”

But then that is not the point just yet. As she put it, “The tennis is a joy now. I mean, really, from the beginning when I hit nice forehand, I was so happy inside, and I was, like, Wow, it’s really great that I do have it still.

“I felt like the tennis was taken away from me, and it wasn’t my decision. Suddenly I couldn’t do what I love.

“I see life a little bit from a different angle… I had the time in my career when I was really thinking if I have motivation, if I want to play—I took the time off in 2015 when I didn’t play Indian Wells and Miami. But now suddenly something happened, and I couldn’t play, and I really saw that tennis is very important in my life… And I mean, now I can just enjoy everything and even—it’s beautiful weather outside. Sometimes I just stand outside and see the sun and say, ‘It’s beautiful.’”

Kvitova will play her first match on opening Sunday against the 86-ranked American, Julia Boserup, and is in a tricky section with other non-seeds Kirsten Flipkens and Bethanie Mattek-Sands.

Her first seeded opponent could be Sam Stosur, who is still in Strasbourg where she plays the final. Top seed Angelique Kerber is a possible fourth-round opponent, with former champion, the in-form Svetlana Kuznetsova, or Caroline Wozniacki in the quarters.

Kvitova’s chances of meeting most of those seeds are, admittedly, slim, but the more matches she gets before Wimbledon, the better—for there, she just may be ready to cause a few upsets.