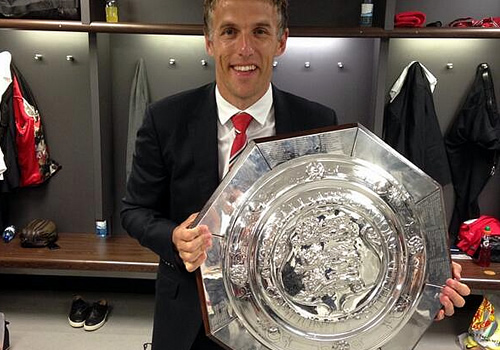 Phil Neville was among the tweeters on Saturday Photo: Twitter/Phil Neville

Adnan Januzaj was the star of the show as Manchester United came from behind to beat Sunderland.

The Red Devils fell behind at the Stadium of Light in the fifth minute when Craig Gardner fired home.

But on his first Premier League start, the 18-year-old Januzaj powered in Patrice Evra’s cut-back before sealing the win with a stunning volley in a six-minute spell after half-time.

The game prompted a flurry of activity on Twitter and here are our favourite updates, in chronological order.

Aston Villa’s Gary Gardner (‏@22Gards) is thrilled to see his older brother give the Black Cats the lead: “Boooooom that’s my bro!”

England legend Gary Lineker ‏(@GaryLineker) chimes in: “Gardener digs a deeper hole for Moyes to climb out of.”

Ex-Black Cats boss Peter Reid (‏@reid6peter) refuses to get carried away: “What a start ! Long way to go. Prefer one in the last minute.”

Ex-France international Louis Saha (@louissaha08) hails David De Gea after the United goalkeeper does brilliantly to deny Emanuele Giaccherini: “What a save!!!!! #DeGea”

Ruud Gullit ‏(@GullitR) praises the Black Cats’ work-rate at the Stadium of Light: “Very impressed about the work rate of @SAFofficial but can they hold on?”

After United equalise, Norwich City’s Anthony Pilkington ‏(@Pilkington_11) is stunned by Januzaj’s brilliant volley to put United 2-1 up: “Wow this januzaj is some player! What a finish that is!!! #Naughty”

Liverpool legend Dietmar Hamann ‏(@DietmarHamann) praises the young Belgian: “Januszaj looks a bit special for United,done more in a half than all the other wingers all season.I give him benefit of doubt for the dive.”

Lineker (‏@GaryLineker) wants Januzaj’s parents to make an exception this evening: “Adnan Januzaj should be allowed to stay up past his normal bedtime to watch #MOTD tonight.”