Arsenal have completed the signing of wonderkid Vlad Dragomir, according to reports 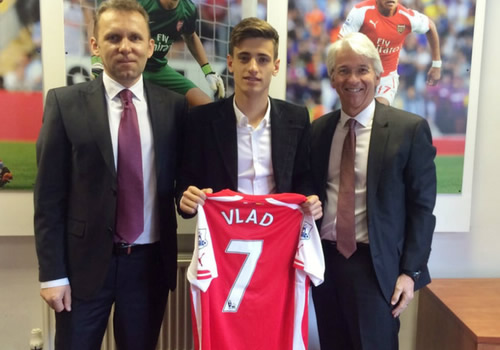 Vlad Dragomir appears to have signed for Arsenal Photo: Twitter

Arsenal have completed the signing of wonderkid Vlad Dragomir, according to reports in the Romanian media.

Prosport.ro are claiming that the 16-year-old has moved to north London, with Arsenal expected to pay a £100,000 fee to his club ACS Poli Timisoara.

The Gunners are reported to have been keeping tabs on the Romania Under-16 captain for almost two years as Arsene Wenger looks to add some youthful talent to his squad.

Inter Milan were said to be among the clubs monitoring midfielder Dragomir’s situation but Arsenal have pipped the Serie A side to the deal.

Dragomir’s agent is quoted as saying: “I proposed to Arsenal a year ago and a half, during which they monitored closely.

“In my opinion, Vlad is one of the most talented players in Europe at the moment.”

The deal, when confirmed, would be Arsenal’s first official transfer signing of the summer as Wenger looks to bolster his squad ahead of next season.

The north London side have been linked with a host of players in recent weeks, including the likes of Chelsea goalkeeper Petr Cech and Liverpool winger Raheem Sterling.