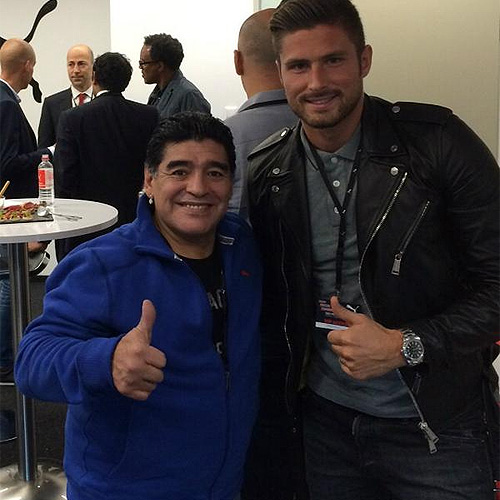 Arsenal fans will hope that Olivier Giroud was asking for goal-scoring tips from Diego Maradona after the Arsenal striker met the Argentina legend at Puma event.

The Gunners striker is currently sidelined with a foot injury and isn’t expected to make a return to competitive action for another two months after picking up an injury at Goodison Park.

And the 28-year-old France international made the most of his chance to meet one of the true greats of the game, Maradona, affectionately nicknamed “The Golden Boy”.

Last week, Arsenal striker Theo Walcott promised to help Giroud through his injury woe after spending the past seven months sidelined with a knee problem.

“I’ve been through a long injury myself now so I’ve said to him, ‘If there’s anything down the line you need to talk to me about from the rehab side of it, from the family side, anything, I’m there for you’,” Walcott told Arsenal Player.

“I’m just a phone call away and he comes in anyway in the afternoons so I’m always there to see him.”

Giroud scored his first goal of the season in a 2-2 draw at Everton last month.