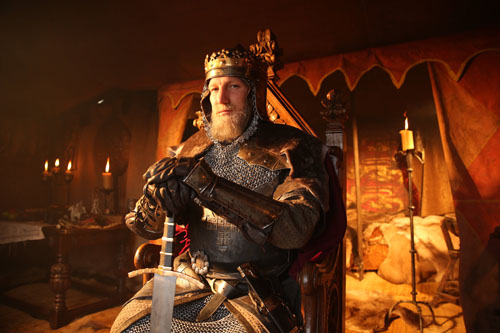 Bastian Schweinsteiger is certainly ready for battle ahead of Manchester United’s final Premier League game of the season against Bournemouth on Sunday afternoon.

Launching in Germany on May 16, the advertisement gives fans of the footballer a chance to see him as they never have before: sporting a beard and king’s armour as he prepares to go into battle with a medieval army.

The commercial, titled You Rule, was created by growth solution provider DCMN and produced by production firm Iconoclast. Shot on location in Manchester in the United Kingdom over two days in April, the spot was created for Clash of Kings as it rolls out marketing campaigns across Europe, with localised spots for key markets. Securing Schweinsteiger as a testimonial was central to the German campaign.

“Past commercials have usually shown Bastian Schweinsteiger in his natural habitat – that is, on the football field. We wanted to surprise people by taking him out of his usual context, so you almost wouldn’t recognise him at the start of the spot. The idea behind ‘You Rule’ is exactly what the game itself is about – putting the player in a whole new scenario and giving them a chance to be king.”

Fernando Morientes: Why I want Real Madrid to sign this Man United star