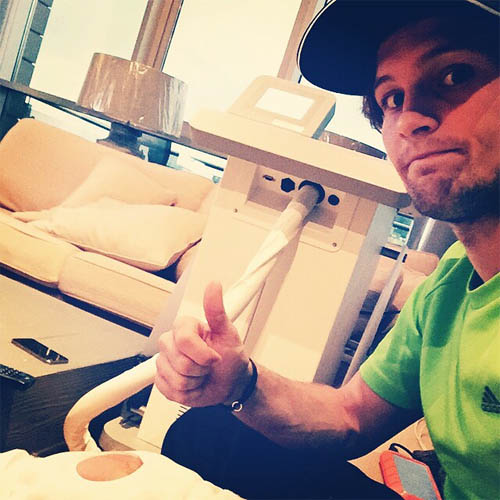 Daley Blind has thanked Manchester United fans for all their support after Louis van Gaal confirmed the midfielder is set for a spell on the sidelines.

The 24-year-old Dutch star was forced off in the first half of the Netherlands’s 6-0 win over Latvia at the Amsterdam Arena on Saturday.

After 10 days’ rest, he’ll have another scan that will say more about the injury

Blind, who joined United in a £16m deal from Ajax in the summer, is set to undergo a further scan in 10 days to assess the severity of the problem.

And the reigning Dutch football of the year was quick to take to Instagram to thank the United fans for their messages of support on Thursday afternoon.

“I want to thank everyone for the support and all the kind messages. Truly helps me during rehabilitation!” Blind wrote on Instagram.

Speaking at his pre-match media conference on Thursday afternoon, Van Gaal played down concerns that Blind could be out-of-action for up to six months.

“He has a brace on his knee,” said Van Gaal. “After 10 days’ rest, he’ll have another scan that will say more about the injury.”

Van Gaal added: “It’s not as bad as the doctors thought after the match, but it shall be a long story, I believe, not six months or something.”

United face bitter rivals Arsenal at The Emirates on Saturday.