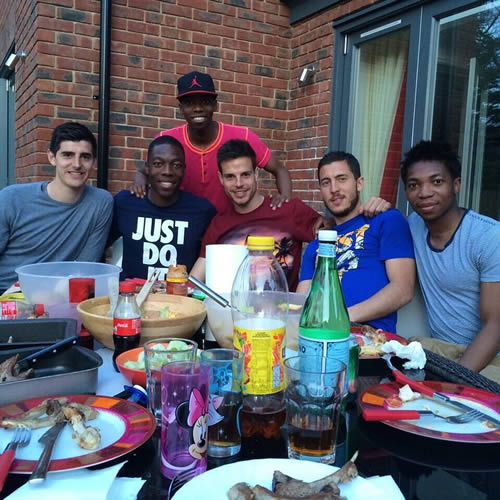 Eden Hazard, Cesar Azpilicueta and Thibaut Courtois enjoyed a break from the rigours of the Premier League on Wednesday night as the Chelsea stars enjoyed a barbecue together.

With Chelsea not in action until Saturday’s Premier League showdown with Manchester United at Stamford Bridge on Saturday, Hazard and his friends enjoyed a meal al fresco.

The Belgian playmaker was pictured all smiles with Courtois, Azpilicueta, Lamisha Musonda and Charly Musonda Junior after having a bite to eat.

Hazard, who joined Chelsea from Lille back in 2012, uploaded the photo above onto his Instagram account and wrote: “Nice evening yesterday… @thibautcourtois @cesarazpi @cjrmusonda10 @lamishamusonda and tyka…”

The 24-year-old has been in sparkling form for Chelsea this season to help Jose Mourinho’s men build a seven-point lead at the top of the Premier League table.

He has scored 12 goals and made eight assists in 31 top-flight games this term as the Blues eye their first Premier League title since 2010.

Start your sports journalism career with The Sport Review Academy