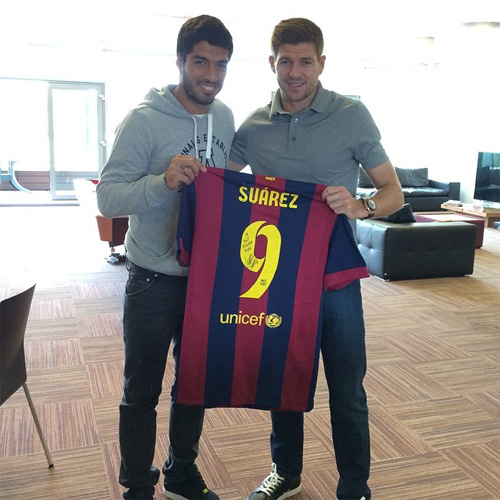 Luis Suarez made a surprise return to Liverpool on Monday morning as the former Reds striker presented Steven Gerrard with a signed Barcelona shirt.

The 27-year-old Uruguay international joined Barcelona in a £75m deal earlier this summer after deciding to call time on a three-and-a-half year Reds career.

Suarez was a key part of Liverpool’s Premier League title push last season, scoring 31 top-flight goals and being named the PFA player of the year.

And the Barcelona striker, who is still completing the moving process to Spain, made a quick visit to the club’s Liverpool training ground to give Gerrard a signed shirt.

On Sunday, Liverpool captain Gerrard said that he wasn’t surprised that Suarez engineered a move away from the club after being banned for four months by Fifa for biting Giorgio Chiellini at the World Cup.

“I thought he was going to stay, I thought we’d have got another year out of him,” said Gerrard.

“I knew there was no way back for him then and I knew he was going to engineer a way out.”

Loic Remy: Jose Mourinho will get the best out of me at Chelsea