Photo: Former world No1 Maria Sharapova tweets picture of an airline passenger reading about her in newspaper 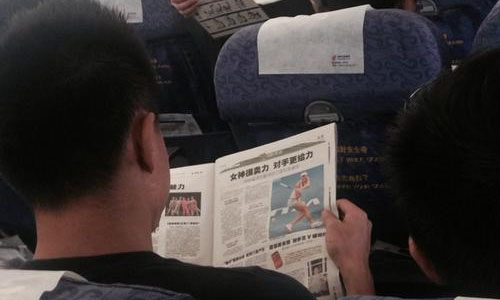 She may be one of the best-known female tennis players, but one man missed the chance to meet Maria Sharapova as he was too engrossed reading an article about the Russian.

The former world number one was boarding a flight during the Asian Swing of the WTA tour on Thursday morning.

Upon locating her seat, the French Open champion spotted a passenger reading an article about the 27-year-old in a newspaper.

The five-time Grand Slam proceeded to snap the head of her new number one fan, who was oblivious to his famous fellow passenger.

Hopefully Sharapova will clear up what we all want to know – did she introduce herself to the unsuspecting passenger!

Sharapova made an early exit from the Dongfeng Motor Wuhan Open this week after a straights sets defeat in the third round.

The former Wimbledon champion can afford to relax a little, though, as she has already qualified for the year-end WTA finals.