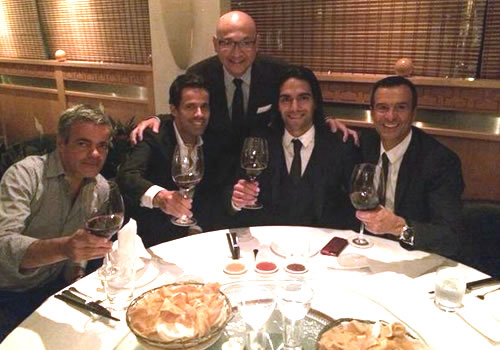 Radamel Falcao celebrated his season-long loan move to Manchester United from Monaco with a glass of wine and a Chinese meal.

The Colombia international joined the Red Devils on transfer deadline day and is reported to be on wages of up to £280,000 a week.

It was a very long day. It was hard, difficult

United have the option to buy the 28-year-old forward at the end of his loan spell at Old Trafford next summer.

And Falcao took to Twitter to post a picture of himself at Wing’s restaurant in Manchester with lawyers Carlos Osorio and Paulo Rendeiro and his agent Jorge Mendes after the deal went through.

Falcao, who suffered a serious knee injury last season, admitted that transfer deadline day was a hectic affair for him.

“It was a very long day. It was hard, difficult,” Falcao said. “We were waiting until the last minute but I didn’t lose my faith. Now I want to say thank you to God for this. I’m very happy.

“I am very happy to be part of this big club. I’ve waited for this moment during a lot of the year. Now I am a player of Manchester United.”