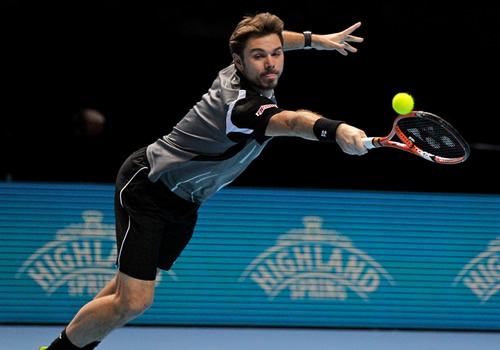 It may have taken the likeable Swiss Stan Wawrinka 36 attempts, but on Australia Day 2014, he finally fulfilled his vast potential to win his first Grand Slam—the only man to break the stranglehold of ‘the big four’—aside from Juan Martin del Potro’s single dent in 2009—in almost a decade.

Not content with that, Wawrinka did it by beating both three-time defending champion Novak Djokovic and world No1 Rafael Nadal. And a couple of months shy of his 29th birthday, he overtook compatriot Roger Federer for the first time, leaping to a career-high No3. 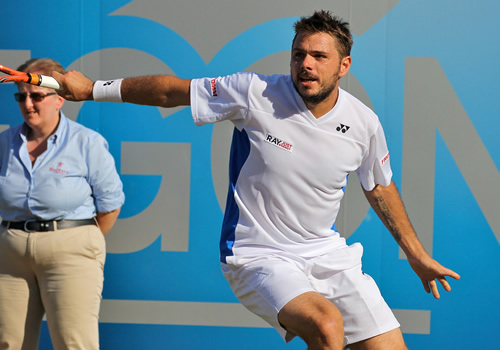 Grass would bring some successes for Wawrinka: A semi-final run at Queen’s—losing to eventual winner Dimitrov—provided the launchpad for a first quarter-final finish at Wimbledon. (Photo: Marianne Bevis)

Long dubbed “Stan the Man”, he finally was ‘the man’, though his had long been a game admired by fellow players and many tennis fans—a compelling mix of power and elegance, an attacking game of strength from the baseline and the net, and boasting perhaps the best single-handed backhand in tennis.

He had broken the top 10 back in 2008 but could not find the consistency, or perhaps the self-belief, to maintain that level. However, having all but fallen from the top 30 in 2012, the man whose fighting spirit is writ large on his arm—Samuel Beckett’s “Ever tried. Ever failed. No matter. Try again. Fail again. Fail better”—fought back, and began 2013 with one of the matches of his career to take Djokovic to 10-12 in the final set of their fourth-round match in Melbourne. 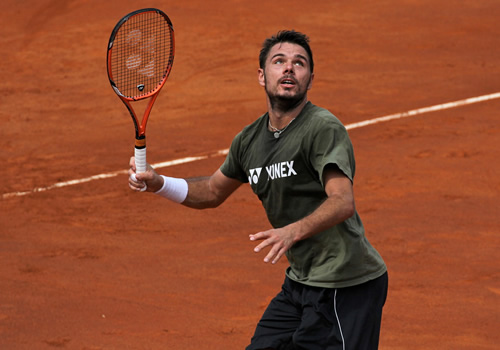 Aside from winning his first Masters in Monte Carlo, Wawrinka would win only one other match on clay, advancing to the second round in Rome. (Photo: Marianne Bevis)

He also recruited Magnus Norman as his coach—a stroke of genius, it transpired. He reached the semis of the US Open with a stunning run through Tomas Berdych and Andy Murray to lose another five-set classic to Djokovic. By the end of the year, Wawrinka was in his first World Tour Finals, reaching the semis, and launched 2014 with the Chennai title and that Australian Open victory.

Suffice to say, he really did “fail better” until he did not fail at all.

Under Norman, Wawrinka’s confidence has continued to grow. The Swiss beat Federer for only the second time in 15 meetings to win his first Masters title in Monte Carlo—though not before the compatriots had eaten dinner and then practised together.

Even so, the modest Wawrinka, still coming to terms with his soaring profile and a new army of fans thrilled by his aggressive brand of all-court tennis, sometimes wavered: He won only one more match through the clay swing. 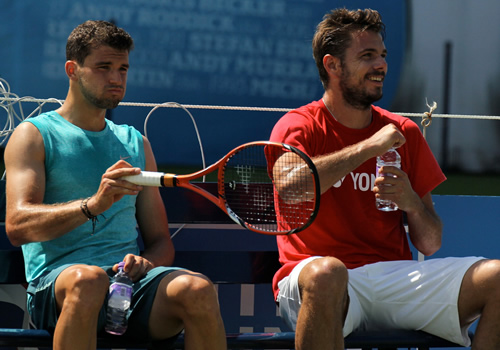 Grass would bring some successes for Wawrinka. He made a semi-final fun at Queen’s, losing to eventual champion Grigor Dimitrov, but not before the two enjoyed practising together. (Photo: Marianne Bevis)

He found his feet again on grass, reaching a first Wimbledon quarter-final, where he took the opening set off Federer but lost his advantage, and eventually the match, in a second-set tie-breaker.

At the US Open, Wawrinka’s quarter-final loss to Kei Nishikori was a five-set headliner, and although he won just a single match in the next four tournaments, the Swiss ended the year in the form that had begun it. 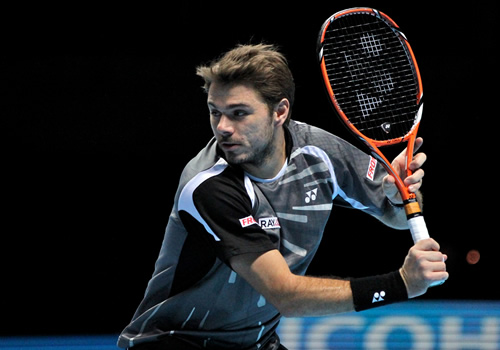 Like friend and compatriot Federer, Wawrinka wields a single-handed backhand—but one of power and penetration with infinite variety of trajectory. It has become, perhaps, the most feared backhand in tennis. (Photo: Marianne Bevis)

In what would become the last main-tour match of the year, and a worthy climax, he was pitted once more against Federer in a two-and-three-quarter-hour show-stopper at the World Tour Finals. Wawrinka held four-match points but Federer would not acquiesce, winning in a final-set tie-breaker.

However Wawrinka, appropriately enough in such a significant year, would not end things with loss but with victory—joining forces with that same rival to win Switzerland’s first Davis Cup.

Even that is not the end of the Swiss story, though: He joins Federer again this weekend for a charity fund-raiser in Zurich.

Few would have anticipated that Wawrinka could ever become as admired in his homeland as his famed compatriot, but in 2014, ‘The Man’ did just that.

See more Wawrinka photos from 2014 on the Flickr slideshow below: