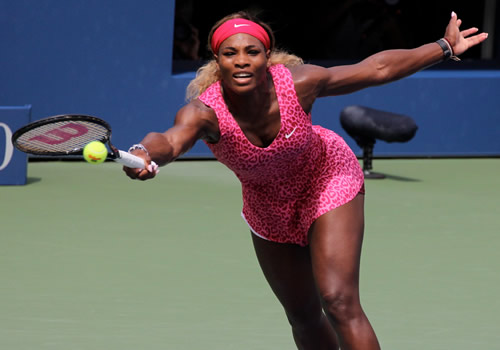 Women’s tennis in 2014 ended, as it has done so often before, at the feet of Serena Williams.

She won a sixth US Open title and a fifth WTA Championship, both for the third year in a row. She ended the season at the top of the pile for a fourth time, taking her streak to almost 100 weeks, a run bettered by only three other women.

Williams equalled two of those women, Martina Navratilova and Chris Evert, in Grand Slam victories with her 18th in New York, a tally build over 15 years.

Yet it was not her success in isolation that marked Williams out as one of the best women ever to play this game. It was, at the age of 33, her resilience and will-to-win—very much like that of Roger Federer. 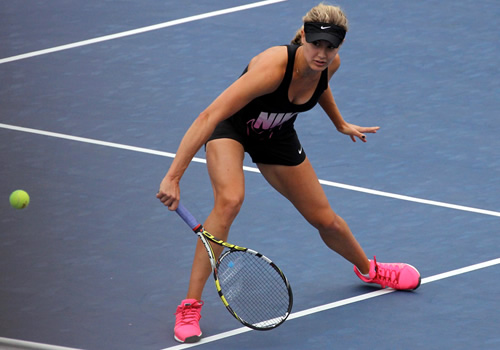 Bouchard made her presence felt with semi runs at the Australian and French Opens and a final finish at Wimbledon. She ended the year with her first title in Nurnberg and ranked No7. (Photo: Marianne Bevis)

For her 2014 trajectory had been like a yoyo, with wins in Brisbane, Miami and Rome contrasting starkly with a second-round exit at the French Open and a third-round loss at Wimbledon.

She left London in poor health, but come the US Open series, she lost just one match—a cracker of a contest against sister Venus in the Montreal semis—on her way to the US Open title. Then a retirement and a walkover in the Asian swing was followed by victory in Singapore. Her only loss to a top-10 player in 2014 was to Simona Halep at those Championships—and she came back to beat Halep in the final. 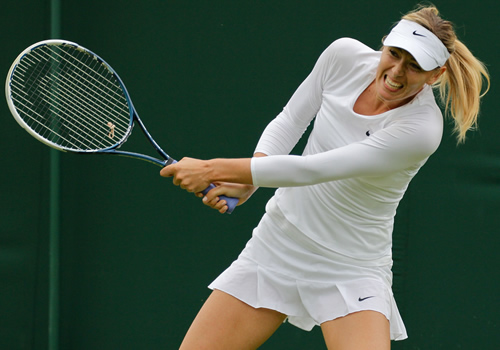 Sharapova not only achieved great results on clay, she time and again came back from a set down to score match-wins, ending the year with the prestigious Beijing title and the No2 ranking. (Photo: Marianne Bevis)

Little wonder, then, that Williams was WTA Player of the Year for a sixth time. But what of the other standout moments of the year?

2014 saw a clutch of new stars make their moves. Newcomer of the Year, 17-year-old Belinda Bencic, revived memories of compatriot Martina Hingis in her style of play. The young Swiss raced from 212 to 33 in a season, making a break-out run to the quarters at the US Open via top-10 players Angelique Kerber and Jelena Jankovic. She also reached the semis of Charleston through two qualifying rounds and ended the year with her first final in Tianjin.

Eugenie Bouchard surged from 32 to No7, and the 20-year-old shone like gold on the biggest stages, reaching the semis at the Australian and French Opens and the final of Wimbledon. She picked up her first title in Nurnberg and earned a place at the WTA Championships and the WTA Most Improved Player award. 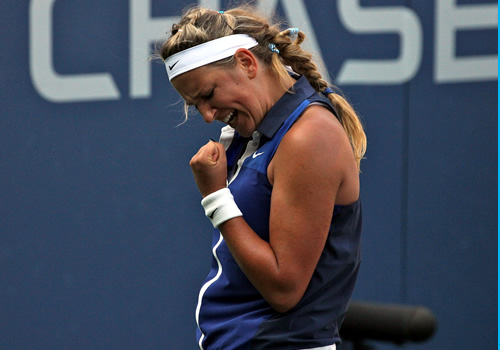 Azarenka started the year at No2 but ended it at 32 after an injury-blighted season. She won only one more match after one of her best results of the year, the quarters of the US Open. (Photo: Marianne Bevis)

Simona Halep proved that her six-title surge of 2013 was no flash in the pan. She rose from 11 at the start of the year to a career-high No2 in August, reaching a first Grand Slam quarter-final in Australia, the final of the French Open and the semis at Wimbledon. She finished the year in the WTA final.

But 2014 was also marked by the rise of several familiar faces. Ana Ivanovic won her first title in three years—and not just one but a career-best four from six finals. She had more WTA match-wins—58—than anyone on the tour, and beat Maria Sharapova twice and Williams once—and twice more took Williams to three sets. And Ivanovic returned to the top five more than six years after she reached No1.

Petra Kvitova was outstanding in claiming her second Wimbledon title three years after her first, and in leading the Czech Fed Cup team to its third victory in four years. 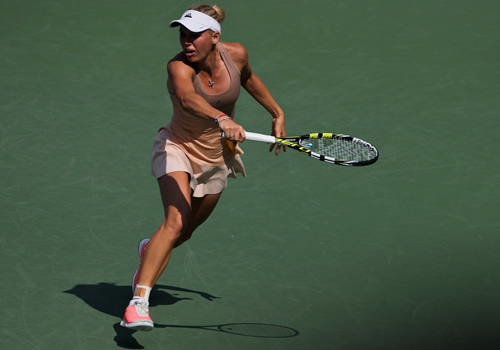 Wozniacki enjoyed a resurgent season that saw her reach the final of a Grand Slam in New York for only the second time—and qualify for the WTA Championships for the first time in three years. (Photo: Marianne Bevis)

Sharapova was again almost unbeatable on clay, losing just one match—in Rome to Ivanovic—but claiming Stuttgart, Madrid and the French Open. And from No9 in March, she ended the year at No2.

Caroline Wozniacki, too, made a popular comeback from a ranking of No18 in March to No8. She started the year with an engagement, was dumped in May, won her first title in July, made her first Grand Slam final since 2009 at the US Open, and reached her first WTA Championship in three years.

The feel-good story of the year, though, was the comeback of 32-year-old Mirjana Lucic-Baroni, whose emotional press conference at the US Open reduced a few of her audience to tears as well. She won her first title at 15, reached the Wimbledon semis at 17, but was knocked back by personal and financial difficulties, only to re-emerge after marriage to Daniele Baroni in 2010. This year, she won her first title since 1998 in Quebec but it was her run through qualifying, past Halep, to reach the fourth round in New York that captured the imagination in her first top-100 season in 15 years. 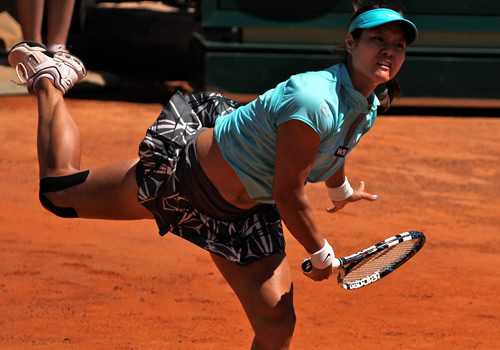 After a stunning first few months to the season—including a second Grand Slam in Australia—persistent knee problems hastened Li Na’s sudden retirement after Wimbledon. She ended her professional career as Asia’s most successful ever tennis player. (Photo: Marianne Bevis)

Another 32-year-old lit up the stage in the first six months of 2014 but would then draw a sudden line under her career. Li Na won Shenzhen and the Australian Open, reached the semis in Indian Wells, the final of Miami and the quarters in Madrid and Rome. But recurrent knee problems finally got the better of her come the grass.

She retired, ranked No2 in the world.

See more WTA photos from 2014 on the Flickr slideshow below:

Photo special: Favourite moments with Murray, Cilic and more in 2014