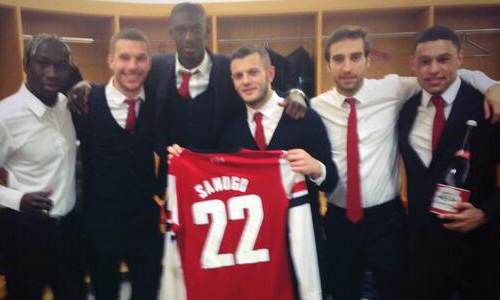 Alex Oxlade-Chamberlain underlined his World Cup credentials as the Arsenal forward scored and made an assist in a 2-1 victory over Liverpool.

The 20-year-old broke the deadlock in the 15th minute of the FA Cup fifth-round clash before Lukas Podolski added a second, with Steven Gerrard scoring what ultimately proved a consolation from the penalty spot.

Here is a selection for our favourite Twitter reaction from the professionals, past and present, as Arsenal set up a quarter-final clash against Everton.

Andros Townsend’s father Troy (‏@Towno10) reckons Oxlade-Chamberlain’s goal is against the run of play: “Well that’s put the cat amongst the pigeons. #onenil”

Former Liverpool striker Michael Owen ‏(@themichaelowen) is a big fan of The Ox: “Not watching the match but surely Wenger must stick with The Ox. Without him Arsenal lack pace in the absence of Walcott.”

Arsenal legend Ray Parlour ‏(@RealRomfordPele) is understandably enjoying the spectacle: “Great viewing at the moment 2 0 to the lads. Keep it going #gooners”

Another Gunner hero Lee Dixon (‏@LeeDixon2) asks whether Luis Suarez should have received a penalty: “Penalty? I’m listening on the radio so can’t see!”

And Ian Wright (‏@IanWright0) gives an indication to his thoughts on the incident: “Cheers Howard ! Love Webb !”

Former Liverpool striker Robbie Fowler (‏@Robbie9Fowler) gives his thoughts on the match: “Couple of things… Not clinical enough and ref needs to have a look at himself.. Shocking decision. Probabky never gave Stevie red because he never booked a few Arsenal players … Also maybe because he missed the second pen.? Evening it out.”

Ex-Reds midfielder Didi Hamann ‏(@DietmarHamann) didn’t rate Howard Webb’s performance either: “Great effort from the boys, wasn’t to be. Should give them confidence to finish in the top 4 […] I won’t be saying anything about the ref as it won’t change anything. Best to get on with it. I never thought he was the best ref in England.”

Liverpool legend Phil Thompson ‏(@Phil_Thompson4) continues the reoccurring theme: “Howard Webb at Chelsea, Howard Webb at Arsenal and how many other grounds?????? […] Unlucky by the Redmen today had enough good chances and possession to have won a couple of games”

Former Reds striker John Aldridge ‏(@Realaldo474) has his say: “WEBBED once again it’s become a joke now.1st pen coulda gone either way 2nd nailed on,but in his defence he was, like at Chelsea 10 yds way.”

Finally, injured Gunners midfielder Aaron Ramsey (@aaronramsey) is looking forward to their clash against Everton: “Only one goal out with my prediction! Great result and another exciting draw for us in the quarter finals.”