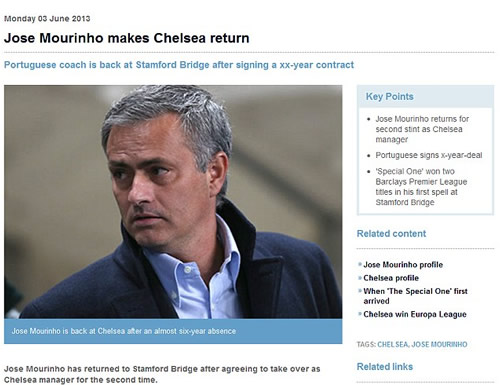 The Premier League has apologised to Chelsea after an article saying Jose Mourinho had returned to manage the club was published on its website.

The story, headlined “Jose Mourinho makes Chelsea return” and published with Monday’s date, appeared on the website on Sunday morning but was quickly removed.

The article’s sub-header said that the Portuguese coach was “back at Stamford Bridge after signing a XX-year contract”.

The first line of the story read: “Jose Mourinho has returned to Stamford Bridge after agreeing to take over as Chelsea manager for the second time.”

However, a spokesman for the top flight indicated that the story had been mistakenly published after being prepared in anticipation of a possible announcement in the coming days.

A Premier League spokesman said: “It was a publishing error. We took it down as soon as we were notified of it, and we’ve spoken to and apologised to Chelsea.

“We have no prior knowledge of any movement or any announcement [regarding Mourinho].”

Mourinho took charge of his final game as Real Madrid boss on Sunday as Los Blancos ran out 4-2 winners over Osasuna at the Bernabeu.

The 50-year-old is widely expected to be announced as the new Chelsea manager next week, and Real Madrid president Florentino Perez on Sunday told Sky Sports that the Portuguese coach would definitely be returning to Stamford Bridge.

“Mourinho is going to Chelsea,” Perez said. “Probably on Monday he will be their new manager. We wish him good luck.”

Mourinho led Chelsea to six trophies during his first stint at the club between 2004 and 2007.