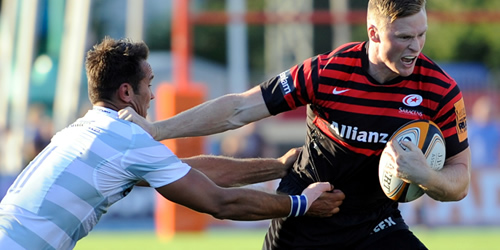 Chris Ashton showed exactly why Stuart Lancaster has kept him around the England set up as he led Saracens into the J.P. Morgan Asset Management Premiership Rugby 7s Series Finals.

The Saracens wing, who was named in the England squad on Thursday, was looking to help Saracens reach yet another J.P. Morgan Premiership Rugby 7s Series final having won the competition in 2010 and lost the final the following year to Newcastle Falcons.

And he exactly did that as the 26-year-old scored one try as Saracens went safely through to the Series Final at the Rec on 9 August with two victories and a defeat.

And joining them in Bath to take on Worcester Warriors, Gloucester Rugby, Newcastle and Leicester Tigers for the trophy is Harlequins – a team already signed up for the World Club 7s at Twickenham later this month – after they won all three of their games.

First up on the night were hosts Saracens, and they were clearly in the mood to make the most of home advantage as they beat London Irish 24-12.

Jack Wilson and Nils Mordt had Sarries flying before the Exiles leveled at 12-12 thanks to a James Greenwood double – only for the home side to pull away late on with further scores from Ben Ransom and last season’s Championship player of the year Tim Streather.

Harlequins then showed what they were all about as they downed London Wasps 26-19 thanks to two tries from Charlie Walker and one apiece from Jack Clifford and Patrice Agunda.

This built up a 26-0 lead for Quins and although Wasps came fighting back through Gus Jones, Guy Thompson and Tom Varndell, it was too little too late.

And Quins showed no fatigue in the very next game as they demolished London Irish 42-19, Kenya 7s star Agunda and Ollie Lindsay-Hague the stars of the show as he helped themselves to try-doubles.

Ashton got Saracens on their way as they beat Wasps 21-17, his try being added to by Michael Tagicakibau and Ransom.

Wasps once again fought valiantly as Thompson and Tom Howe went over, the latter twice, but again they left themselves with too much to do.
London Irish ensured their night ended on a high as they condemned Wasps to a hat-trick of defeats as they ran out 31-19 winners.

But the damage had already been done with the Exiles getting on the board through Juliano Fiori, Fowlie, Ellis and Will Smith.

Despite this result meaning that both Harlequins and Saracens were through to the Finals before they faced off against each other in the evening’s final game, there was the small matter of who would go through as group winners to sort out.

And that honour went to Harlequins as a player-of-the-round Walker hat-trick and a further score from captain David Ward saw them win 24-21.