Premiership Rugby 7s: Harlequins skipper David Ward backs his side to win the title next week at the Rec 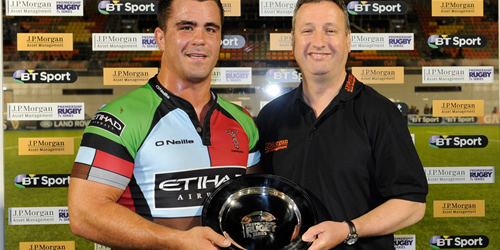 Harlequins emerged victorious in Group C of the J.P. Morgan Asset Management Premiership Rugby 7s Series and 7s skipper David Ward insists securing the title next week at the Rec is well within their grasp if they can carry their momentum through.

After a 26-19 victory over London Wasps and an emphatic 42-19 defeat of London Irish, Ward and co upset hosts Saracens to top the group and seal a place in the Finals next Friday.

Centre Charlie Walker was in particularly devastating form, scoring a hat-trick in the deciding game against Sarries, while England Under-20s captain Jack Clifford also starred having led his country to a Six Nations and Junior World Championships title this year.

And Ward believes, with such young talent showcasing what they can do when given space, anything is possible in Bath next week – but getting off to a good start is vital.

“It was a really tough day at the office. We started really well and carried that through to the last game against Saracens which was the toughest one and we got across the line,” said Ward – who will face off against Sarries, Worcester Warriors, Newcastle Falcons, Gloucester Rugby and Leicester Tigers for the silverware at the Rec.

“We talked about momentum all night, we get the momentum on the pitch and by winning games and we did that in the first two and when we faced Saracens it showed.

“On their home ground of course we wanted to beat them and it could of gone one of two ways and it was an interception in the end that won it and that was lucky for us.

“It was the guys around me like Jack Clifford, Ollie Lindsey-Hague and Charlie Walker who did the work and they will all certainly be playing some first XV rugby for Quins this season.

“Guys like Jack Clifford in space and in this format, he can utilise his skills really well and when you put those guys on a XVs pitch they will bring their skills like they did here.

“It is going to be tough in Bath. There are six teams and you have seen from the previous two rounds that there are some really good 7s players and teams.

“We are certainly going to win it and whether we do or not will depend on the momentum like we got here. If we get that early we can definitely go on and win and hopefully we will.”

Joining Quins in the Finals are Saracens who, despite losing in the final fixture on Saturday night, still qualified after victories over Wasps and the
Exiles placed them second in the group.

And 7s captain Nils Mordt insisted qualifying for the showpiece event was the main aim even if he was left to rue what might have been after some missed opportunities against Quins.

“We are very pleased. We were all a bit rusty – we haven’t done any sort of sessions – so it was good for us to get out there and I think by the third game we played some good rugby,” said Mordt, who was joined by England wing Chris Ashton in the 7s side.

“It just showed that small turnovers or the bounce of the ball can mean a try. With the dangerous players Quins have it was a lesson for us really.

“As a team we have been looking forward to it massively. Individually all of us wanted to get out and prove ourselves and put a good foot forward for the season.