Premiership Rugby 7s: Harlequins centre Harry Sloan says he is getting used to the winning feeling ahead of Finals 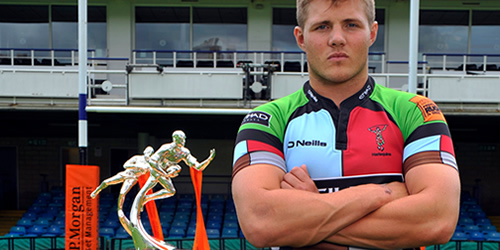 Despite being still in his teens, Harlequins centre Harry Sloan is getting used to that winning feeling.

After all, the 19-year-old helped England Under-20s to the IRB Junior World Championship title last summer, with a try-scoring performance against hosts South Africa.

Sloan hasn’t had it all his own way, however, with ruptured ankle ligaments keeping him out of the entire Under-20s Six Nations campaign this spring.

Sloan was one of a number of Quins starlets to shine in the Group A wins over Saracens, London Irish and London Wasps on Saturday as the south west London outfit ended the night undefeated.

And he is not satisfied, either, urging his teammates to up the ante and start the season with a bang at The Rec.

“We were very happy to go to Saracens against three London clubs and come away with three wins,” said Sloan, who enjoyed a try-scoring debut for the senior side against Northampton Saints last season.

“It was a great evening for us but we are not done yet and we have the final to look forward to on Friday and we all are ready for that and we will save the celebrations until afterwards.

“We see this tournament as a benchmark for the rest of the season to come so it is really good for us to set the mark of what we want to be achieving this season.

“Last year we won the A League and the LV= Cup so for us youngsters to start up with the J.P. Morgan 7s and then take the success forward is a great opportunity.

“The 7s does help you for your XVs development. There is a lot more space, it’s a lot more open, you can get your hands on the ball and you can show off some skills that perhaps you wouldn’t normally see in the XVs so to show that to the coaches is important.”

With the likes of Jordan Turner-Hall, Matt Hopper, George Lowe and Tom Casson ahead of him in the pecking order, it’s possible Sloan will be restricted to loan appearances in the Championship with Ealing Trailfinders and A-League games this season.

But that’s all the more reason to make an impression this weekend – although the quality of the opposition means victory is anything but guaranteed.

Reigning Aviva Premiership champions Leicester Tigers in particular look dangerous – but Sloan is confident Quins are up to the challenge.

“Obviously Leicester have been training hard for this tournament,” he added.

“I saw a couple of their matches on Friday night and they are a very good side but we will have to hit the ground running in that first game and try and get a win early doors.

“We have a strong 12-man squad and 12 people that can definitely perform on the pitch and we will be looking to do just that against a tough Leicester team.”