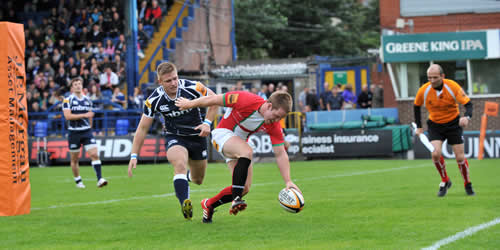 The Exiles saw off Sale, Northampton and Leicester, picking up a bonus point in each game to secure their place in the finals at the Rec on 3 August.

They will be joined by Sale in the final as the Sharks bade a fond farewell to Edgeley Park with comprehensive wins over Leicester and Northampton, before they make their move to the Salford City Stadium.

Welsh got off to a dream start as they raced into an early lead against the hosts, eventually running out 31-19 winners in their toughest test of the night but Ben Seru and Chris Banfield, with two tries each, saw them home.

What followed was even more impressive as first Northampton, 34-7, and then Leicester, 52-5, were put to the sword – the electric Ed Tellwright picking up four tries against the Tigers.

With the Exiles already assured their place in the finals, the question was who would join them with Sale and Northampton on a win apiece heading into the night’s final game.

Alex Day’s try early in the second half looked to have brought the contest alive with Northampton trailing just 19-14.

But two tries in the space of a minute from dynamic hooker Will Hafu put the Sharks out of sight and ensured they would join Welsh and last week’s qualifiers Saracens and London Irish in a fortnight’s time.

Ironically it was Aaron Myers, a member of Newcastle’s title-winning team last year, who was named player of the round, and he admits that after the Falcons had gone down he was desperate to play a role this year in an attempt to claim back-to-back titles.

“I was so disappointed that Newcastle had gone down because I wanted to be involved in the competition again. With the way it happened at Welsh, this tournament got landed on them and they needed to put a side together so I expressed interest in playing to one of [team manager] Terry Sands’ colleagues and then he rang me up and asked me to play,” he said.

“When I played last season I was just associated with Newcastle. They got me in on a trial and they wanted to get me involved with the team more but it didn’t work out for one reason or another.

“So it’s good to be back and be the only person who can retain the trophy. I’m flying the flag in a way for Newcastle.

“We’ve only trained once so we’ve got a lot of work to do but we’ll get together, do a couple more training sessions and I think we can be a threat. But seeing the stuff from the first leg there are some strong teams out there so it will be a challenge.”