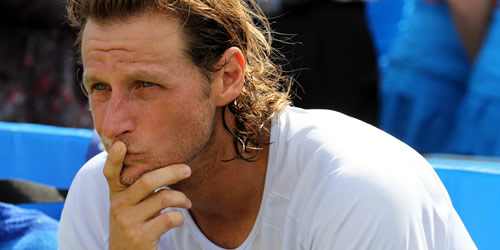 David Nalbandian had won the first set before his kick of frustration Photo: Marianne Bevis

When Argentine David Nalbandian took to court after a truly eventful Aegon Championships to play his first final on grass since Wimbledon 2002, he seemed sunny enough.

When he played his usual brand of crisp, consistent accurate tennis to stave off the big serving, net attack and forehand of Marin Cilic—who had not even reached a grass court final before—to take the first set in a tie-break, 7-3, he seemed well on his way to his first title since 2010.

When Nalbandian pulled back an early break of serve in the second set to level at 3-3, all seemed right with the world. Even the sun had come out to play and it was—well, almost hot.

But then it all went wrong. Nalbandian went 0-40 down on serve, hit a forehand on the run and ended up at the side of the court.

Now it was the Argentine who burned with an anger that he later struggled to explain: “Sometimes you cannot control those moments—that many times happens—well, to me.”

He kicked the advertising boarding around the chair of baseline judge, Andrew McDougall, the wood went flying and cut the judge’s leg, sending McDougall toppling to the ground.

Neither Nalbandian nor the crowd noticed at first the nature of wound until McDougall pulled up his trouser leg to reveal blood tricking down his shin.

He quoted “unsportsmanlike conduct”, a rule that requires a mandatory default, as the ATP Code of Conduct makes clear: “Players shall not at any time physically abuse any official, opponent, spectator or other person within the precincts of the tournament site.

“For the purposes of this rule, physical abuse is the unauthorised touching of an official, opponent, and spectator or other person.”

Cilic looked the most bewildered man on the court but eventually got his hands on the biggest trophy in tennis. He afterwards agreed, though, that the officials had no choice but to take the decision, despite a jeering crowd that set up the chant “play on” for several minutes ahead of the presentation.

He explained: “The rule is like that to protect people, the ball boys and the referees. So it’s the supervisor’s decision. But definitely very sorry to finish the tournament like this, especially in the final where we both I think played good tennis.

“He was playing also some great rallies and those last two games was extremely interesting, making two breaks one of each side. So I think it was good tennis today.”

Nalbandian followed Cilic onto court—not for a runner’s-up prize, as he forfeited both the prize money and ranking points he could have earned from the tournament—first to apologise but then to criticise the ATP.

“I am very sorry, sometimes you get frustrated on court. Sometimes I make a mistake. It’s tough to end a final like that but sometimes we feel so much pressure from the ATP playing so many tournaments.

“Today I’ve made a mistake but everyone makes mistakes. There are a lot of rules and sometimes they don’t do anything.”

He later elaborated to the media: “At the beginning of the year you have to sign that you agree with everything that the ATP says, right? And sometimes you don’t [agree]. 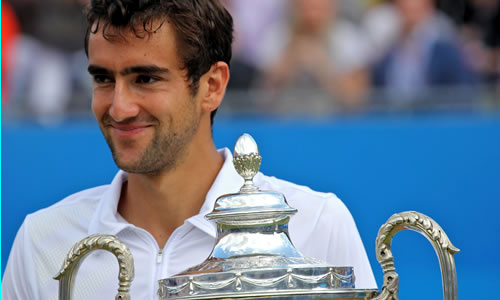 Marin Cilic poses with the Aegon Championships trophy, the biggest in tennis, after his dramatic victory at Queen’s Club

“And if you don’t want to sign, you cannot play ATP tournaments. So you don’t have a chance to ask, to change something—nothing. So if you don’t sign, you don’t play: You have to agree 100 per cent what the ATP says.

“Sometimes the ATP put a lot of pressure on the players, and sometimes you get injured because you play on dangerous surface and nothing happens.”

Whether he was alluding to his rescheduled matches that saw him play at the end of each day on Court 1, twice being postponed due to rain, he did not say, but concluded with the assurance that he held no grudge against the tournament: “This incident doesn’t mean that I’m not going to come back or maybe go to another tournament.

“I really feel good in this tournament. The tournament director is great to me this year, last year, and all the time that I came. So feel very good here. This is a bad situation for everybody that I really apologise for that.”

It was a view that ATP supervisor Tom Barnes and tournament official Chris Kermode confirmed after Nalbandian had gone off to lick his wounds and Cilic to celebrate his first title of the year.

First Kermode: “Mistakes happen. There was no way [Nalbandian] intended to do that. He’s played phenomenal tennis this week, and the crowd love him. He’s devastated by this.”

But Barnes did acknowledge that other fines could be on the way for the “very emotive” South American: “He could be fined further for saying inappropriate things.”

But he added: “I think you have to give the guy a chance to let off some steam there. He didn’t intend to do what he did.

For the record, the line judge was quickly bandaged and reported to be fine. Cilic was off to play some exhibition tennis in the coming days at the Boodles event in Stoke Park.

And Nalbandian? Well he was left to rue the chance he had to climb a few more places in the rankings, the loss of at least a $45,000, and the opportunity to finally win a title on grass.