OK, so the top seed was gone, so were the fourth, seventh, 11th and more – but those who were left at the halfway stage of the Aegon Championships could more than hold their own when it came to watchable tennis.

Indeed for the purist—for which read, perhaps, older—tennis aficionados, the absence of a baseline-gripping Gilles Simon or a serve-dominating Ivo Karlovic had opened the way for an old-fashioned style of tennis to flourish.

Jo-Wilfried Tsonga, no stranger to all-court skills, pointed to the gifts of fellow Frenchman Nicolas Mahut – “on grass he’s maybe one of the best players in the world”.

Feliciano Lopez has achieved more on grass than anywhere else, reaching the quarters at Wimbledon three times and the semi-final at Queen’s in 2010. 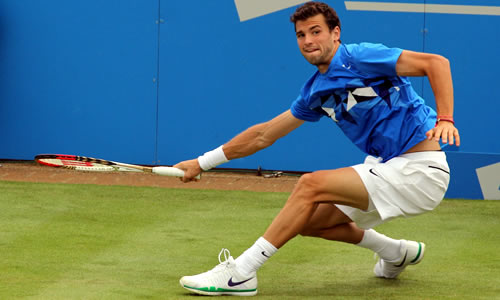 Dimitrov on his way to a tumble

Grigor Dimitrov won the junior Wimbledon title in 2008 and took Tsonga to four charismatic sets on Court 1 last year. He freely admits that grass is his favourite surface, and has the variety of shot and speed of feet to make the most of its qualities.

The 6ft 8in Kevin Anderson, like Lopez, is enjoying the highest ranking of his career and has the kind of the formidable serve that provides the launch-pad for fast, attacking tennis.

So where to look when these four men took up their positions, on adjacent courts, in pursuit of a quarter-final match against one another? Centre Court opposed a pair divided by almost a decade in age but only seven places in the rankings, Mahut and Dimitrov. Court 1 pitched the Spanish left-handed Lopez against the towering Anderson from South Africa. 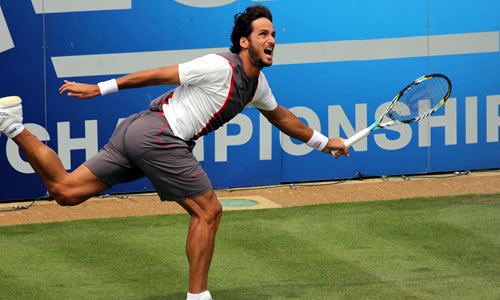 Lopez roars his way to a forehand winner

The solution was simple, but required eyes in the back of the head, an ear tuned into two courts and one particular row of seats with a birds-eye view of both matches.

There will be few better ways to spend an hour and a half at Queen’s: one minute fast and furious serve and volley tennis, the next some chip-and-charge breakouts finished with touch at the net or a cute lob. In between, sliced cross-court backhands were interlaced with down-the-line winners—on one side from the eagle-winged sweep of Dimitrov, on the other from the powerful left-arm drive of Lopez.

The two matches interwove with delicate timing. Just as Lopez and Anderson reached a first-set tie-break, Mahut was serving at 5-4 for the first set. 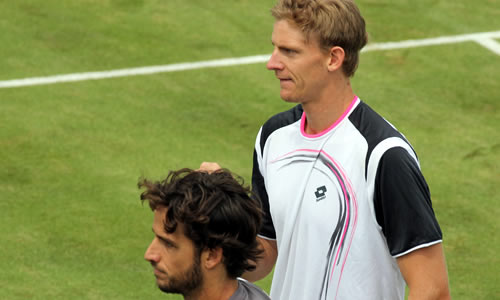 The contrasting faces of victor and vanquished

Just as Lopez rushed to what looked like a decisive lead of 5-1, Dimitrov reached break point to level the set.

A quiet Anderson powered back in the tie-break against a soundtrack of Lopez roars and “vamos’s” and earned a set point just as Mahut faced a fourth break point. Dimitrov—firing repeated backhand winners past the net-racing Mahut—broke back and they were quickly at their own tie-break.

With Frenchman and Bulgarian at 0-0, the other pair edged to 10-10. Fans from Centre Court became increasingly aware of the close battle next door and began their migration upwards, but most missed the concluding shot that deprived Lopez of the first set: a cruel bounce that took the ball over his racket.

Dimitrov, meanwhile, rose to the Mahut challenge, outplaying the Frenchman at his own game. Both men slipped and slid, plunged for the ball, made not a sound nor an ill comment. But it was the younger man who more effortlessly sliced his way to the net, dropped volleys, hit down the line and across court, to take the set, 7-3. 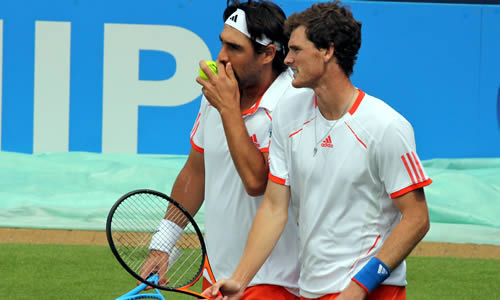 And while all that was going on, Jamie Murray joined Marcos Baghdatis in doubles action—they lost

Meanwhile, Lopez and Anderson served and pounded at speed through the second set, deadlocked at 4-4 at the very moment Dimitrov broke Mahut for a 3-2 lead in their second.
By the time the big men on Court 1 had reached their second tie-break, Dimitrov was ready to serve for the set against a man beginning to feel the effects of his two and a half hours against of Murray. His serve lost its zing while Dimitrov dropped only two points on serve in the match-winning 6-4 set.

Just time for a surge of humanity to catch the closing drama on Court 1: a tie-break at 5-3 in Anderson’s favour, clawed back by Lopez to 6-6, before an 18th ace from the South African and an error from the Spaniard finished things off to roars of appreciation—from two courts.

Anderson and Dimitrov have met twice before and split the honours. The last, won by Anderson in San Jose this year, involved three sets and two tie-breaks, while the other, on grass, went to Dimitrov.

There will be no need for a split personality for this one. With No 2 seed Tsonga now also beaten, it looks certain to take centre stage.