Queen’s 2013: Juan Martin del Potro, Jo-Wilfried Tsonga, Andy Murray and Lleyton Hewitt are all through to the quarter-finals 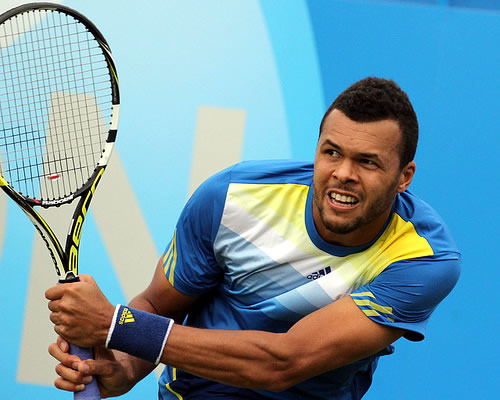 The leaden clouds scudded over the brilliant green courts of Queen’s Club throughout a packed Thursday schedule, but only once—and then for just five minutes—did play come to a halt as player after player sealed their places in the quarter-finals.

With Tomas Berdych taking the first spot by the time sponsors and guests were ready for lunch, and Lleyton Hewitt following soon after, it was time for Briton Dan Evans to try his luck against the No3 seed, Juan Martin del Potro.

It had, thus far, been a dream run for 23-year-old Daniel Evans, ranked 277 in the world and thus not eligible for a wild card into Wimbledon’s main draw. On Monday, though, he recorded his first ATP tour-level win, 6-3, 6-1, over Guido Pella, and then topped it with a determined three-set victory, 6-4, 6-7, 6-4, over No13 seed, Jarkko Nieminen.

But he faced, in del Potro, a mountain: the world No8 from Argentina, a former Grand Slam champion, stands nine inches taller than the 5ft 9in Briton, holds 14 titles and has accumulated earnings of over $12 million. Yet del Potro was just back to competition from almost a month away with illness, and his lack of match-play showed in his long and hard-fought win over Xavier Malisse in the first round.

With that match under his belt, however, he gave Evans barely a look-in during the 18-minute, 6-0 opening set: in fact just eight points.

Evans started much more strongly in the second, pushing del Potro to deuce in the opening game and then holding to love. The Briton’s skills with slice, touch, and chip-and-charge could find holes in the del Potro game, and did for a while. But the sixth game brought the decisive break and the Argentine served out the match 6-3 in 54 minutes—the third man to reach the quarters.

It was nip and tuck which of two unfamiliar names would follow del Potro to the quarters. In the event, it was the No112-ranked 20 year-old Denis Kudla, already a victor in straight sets over No9 seed Benoit Paire, who raced to his next victory in 53 minutes, 6-1, 6-3, over No86 Kenny de Schepper.

The 2011 runner-up began the day by defeating compatriot Edouard Roger-Vasselin in an hour and 50 minutes , and then took almost as long in dismissing the classy grass-court, single-handed backhand game of Igor Sijsling.

With defending champion Marin Cilic sealing his own hard-won place—three sets and two hours 23 minutes against Feliciano Lopez—just before the club guests headed off to tea, it came down to two remaining singles matches, played out on the adjacent Centre and No1 courts.

Within a quarter of an hour of Murray beginning his second match of the day, though, Benjamin Becker had knocked out No7 seed Alexandr Dolgopolov, and could sit back and watch his next opponent, whether Murray or Marinko Matosevic, compete for the right to meet him in the top quarter of the draw.

Murray, in fact, was playing someone who had already been able to sit back and take in the scenery since Monday. Matosevic, though a year older than Murray at 27, was a new arrival in the top 100 only last year, now ranked 65. After playing his first match, he received a walk-over in his second from Michael Llodra—but judging from his play in the late afternoon three days later, that perhaps had not worked in the Australian’s favour.

Murray broke in the third game and again in the fifth, dropping just five points on serve and offering up not a break chance in return. In 25 minutes, he had served out the set 6-2.

It was, though, the nature of his play that enthralled the packed stands bathed in sunshine for almost the first time this week. Murray mixed it up, now serving big, now serving with wide swing, firing his backhand cross-court or down the line, and slicing to within a centimetre of the net-tape. That he pulled off such shots, as well as drops and touch volleys in such a full-blooded wind, was all the more impressive.

The second set unfolded in similar style, though Matosevic tried to answer in kind with plenty of slice, net approaches and the occasional cross-court put-aways. But he was foxed both by Murray and the conditions and his error count rose.

The Australian was quickly a break down, saved two break points in the fifth game with some ambitious net play, but conceded the break with two more errors. Murray led, 4-1, suffered a brief loss of concentration to hand one break back, but righted the ship with a love hold to lead 5-2. One last break to love from Murray took him into the quarters after just 56 minutes.

Murray is clearly feeling both fit and upbeat, about being back on a tennis court and playing at Queen’s.

“I’ve played in every slam for seven years, so missing the French Open was extremely difficult, and I realised how much it means to me just to be able to be on the court competing. Obviously this is a great court to come back to when you haven’t played for a month, to get great support from the crowd for the first match. I’ve always enjoyed it.”

He is also, importantly, pleased with his physical fitness.

“I thought I moved pretty well. Normally the first couple of matches here, the court is quite slippy, and that’s something I have struggled with the last few years, first couple matches. I haven’t slipped down once, I’ve been pretty careful with my footing, even though yesterday was tough because the court was wet. That has been a good sign, and now it will keep getting better.”

Murray is one of three former champions in the last eight, and the quarter-finals will each hold at least one of the top five seeds. Despite the rain, the wind and the cold, the weather over Queen’s seems set fair for a high-quality and compelling climax to the tournament.