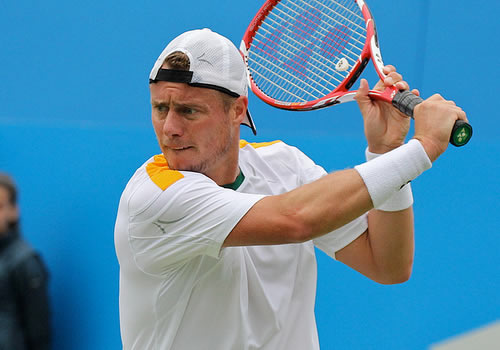 So finally, the sun put in an appearance at Queen’s Club. The wind whipped up only white clouds and the air turned dry and warm: in short, the perfect weather for English, grass-court tennis.

As if in celebration, the day’s play featured the five top seeds—all ranked in the top dozen players in the world—as well as former world No1 and four-time former champion at this illustrious club, Lleyton Hewitt.

Not that there was any shortage former champions on the quarter-final playlist. The very first match pitched defending title-holder, the No12-ranked Marin Cilic, against one of the most prolific match-winners of the year, the current No6 Tomas Berdych.

The next match put Hewitt up against a fellow Grand Slam champion, Juan Martin del Potro, and they were followed by the home-grown, two-time champion, top seed and world No2, Andy Murray.

It was the tall Cilic and Berdych who set the early pace, and both brought with them excellent records on grass. The defending champion from Croatia, still a deceptively young 24 years old, reached the quarters six years ago and again in 2011, before winning last year—a 14-4 winning record at Queen’s and 27-14 overall.

But he had not enjoyed such an outstanding season as his opponent. Berdych, though without a title, had reached finals in Marseille and Dubai, the semis of three Masters—Indian Wells, Madrid and Rome—and had stacked up the fourth most match-wins this year.

It is also easy to forget just how successful the huge Czech man has been on grass, with 40 wins to 17 losses. And he captured his 400th tour win in Madrid the very same week as Murray had.

And Berdych’s progress had been seamless: He dropped just five games in his first match and seven in his second. Cilic’s progress had been rather less straightforward, coming back from a set down against Feliciano Lopez, 4-6, 7-6, 7-5. Soon after, he was back on the doubles court with del Potro to beat the No2 doubles seeds in another closely-fought match.

Add into the equation that Berdych had won four of their five previous matches and the odds were stacked with the Czech.

However, as both men, dressed in traditional white from top to toe, blasted their way through the opening games, it was the quietly-spoken man from Croatia who played the crisper and more accurate tennis. He came under pressure on his second service game, but even with Berdych serving at 80 percent, he remained focused.

For two such tall men, both are great movers on a grass court, can wield a good sliced backhand, and are willing to come forward to finish at the net. Berdych reached the 12th game without facing a break point but then found himself facing two, and Cilic converted on the first to claim the first set, 7-5.

The second set followed a very similar pattern, Cilic facing an early break point in the fifth game, but he was serving well—seven aces in the second set alone to Berdych’s three—and picked up the big Czech’s serve with increasing regularity.

Cilic faced deuce again in the ninth game, held it off, and they headed to a tie-break. The Croat dropped the first point on his serve but a deft drop shot left Berdych flat on the grass to level 2-2, and he was never headed again.

Cilic advanced to the semis for the second straight year, 7-6 (4), in what had been a high-quality and close match, and he would face the winner of another fine contest.

Hewitt, playing in his first quarter-final in almost a year, faced a del Potro who had already won in Rotterdam, reached the Indian Wells final and the Dubai semi-final this season.

And despite coming to Queen’s after a month’s absence with respiratory illness—del Potro missed almost the entire clay season—he quickly adapted to the low-bouncing and slippery conditions.

Like Berdych and Cilic, the power-playing del Potro has shown increasing skills at the front of the court and surprising speed of foot for such a big man.

But he played, in Hewitt, one of the toughest fighters, still burning with a passion to win, still fast after repeated surgery to hips, ankles and toes, and with grass-court skill in abundance. Indeed alongside current players, Hewitt, now 32 years old, is second only to Roger Federer in grass-court match-wins and titles.

And to see Hewitt in the opening set showed just why he has been so successful: the lowest of sliced backhands, drifting angles, then a switch of direction with a top-spin forehand or a ghost into the net.

He had del Potro firing errors all over the court, and ran to a 6-2 lead with a backhand volley finish.

In the second, though, del Potro began to open up his formidable forehand, find some control in the long sliced exchanges and drew errors in the first and third games to break for a 4-0 lead. Hewitt edged a break chance in the sixth but it was snuffed out with great baseline hitting from the No3 seed and, after a stunning drop-shot-lob exchange, twice over, the Argentine leveled at 6-2.

Hewitt, dressed all in Wimbledon white yet still sporting his rebellious back-to-front baseball cap, was not done. He turned on some more delightful grass-court tennis just as he had done 13 years ago when he first won this title.

Del Potro floundered more and more with the low skimming balls and Hewitt glided to a 6-2 victory. He had dropped just four points on serve in the last set and made eight aces overall: Not bad for man of 5ft 11in.

Since he last won at Queen’s, in 2006, Hewitt and wife Bec have added two children to the baby they had back then, and their cherubic son Cruz was straight onto court to embrace his father. The four-year-old has charmed the crowds on practice courts and in matches, but so has his father—more warmly supported, even against the popular del Potro, than perhaps at any time in his long career.

And he is still in the running to become the oldest ever winner at Queen’s.