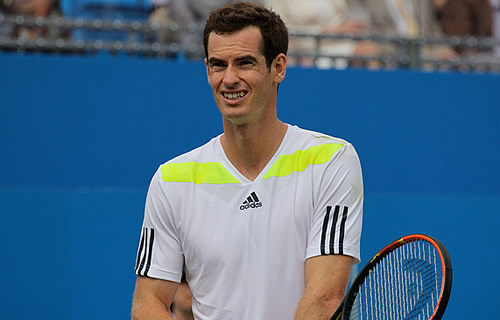 Andy Murray is out of Queen's Photo: Marianne Bevis

Andy Murray has been the centre of attention since he arrived at Queen’s Club to begin the defence of his Aegon Championship title.

He brought to his third-round contest against the veteran Czech Radek Stepanek a 19 match-winning streak on grass dating back to the London Olympics in 2012, a run that took in the Wimbledon and Queen’s titles last year—and he had reached the final of the 2012 Wimbledon too.

No wonder, at just turned 27, he is already second only to Roger Federer and Lleyton Hewitt in both grass titles and grass matches won in the Open era. And he talked after his first win this year of his love for the place and for grass: “I enjoy playing here. I love being back on the grass. Grass is a surface I have always enjoyed.”

Unfortunately, ever since he arrived in London, there has been even more talk about his appointment of new coach Amelie Mauresmo. It has made headlines all week, and even after he delivered a long interview on the subject to the BBC before the tournament began, he had to repeat at length the minutiae of the decision-making after his opening match.

Perhaps the timing of his announcement was a mistake—or perhaps the distractions all week made no difference to his transition from clay to grass.

For the other element was his opponent, one of the most enduring presences on the tour and a serve-and-volley player from the old school. By the time Murray had played Stepanek in their first ever match back in 2005, on the grass of Wimbledon as it happens, the Czech was a pro of nine years’ standing and, significantly, with a tally of 10 doubles titles to his name. Murray won that first match, but Stepanek’s long career took him to a singles ranking of No8 in 2006 and couple of Masters finals in the process.

Despite missing three months of 2013 undergoing neck surgery, Stepanek went on to win the US Open doubles title with Leander Paes and is currently ranked 42 in singles, and earlier this year had taken a set off both Roger Federer and Rafael Nadal on the spring hard courts.

But it was the 35-year-old’s prolific doubles skills that shone on the Queen’s grass, even though he felt the surface here—and everywhere—was slower than it used to be:

“The days when we serve-and-volleyed after first and second serve are gone. As you can see, I’m trying to come to the net as much as I can. I’d rather see more players on the net, playing a little bit the old style game. But the grass is much slower than it was.”

And though Murray broke in the very first game, he was up against it throughout the first set. Stepanek levelled after a double fault from Murray set up break-back point, and the first of many cat-and-mouse exchanges combining volleys, drops, lobs and chases, went to Stepanek.

Murray survived a huge test in the eighth game—six deuces, and a break point— to hold with a big serve, and an ace took his next hold as well. He even faced another break point at 5-6 with more big serving to take it to a tie-break.

Now, Murray looked as though he was lifting his level to seize the momentum and he took a 6-2 lead, only to see it whittled away by some outstanding serving from the Czech, who would notch up five aces and win 26 out of 28 first serves in the set. Stepanek boldly attacked the net on the Murray serve to level it at 6-6.

The two edged onwards, three more times earning Murray a set point, but each time he was forced into error, if not by a drop-lob combo then by some brilliant sliced backhands that even the proficient backhand of Murray could not match. But appropriately enough, it was a fine overhead winner that gave Stepanek the set, 12-10.

Stepanek has never won a title on grass, but at the height of his rankings, he made the quarters at Wimbledon and the semis at Queen’s. All that classic grass-court flair, undoubtedly honed by his doubles work, was to the fore in the second set, and Murray seemed unable to either counter or contain it. The Czech made a down-the-line winner in the first game and Murray put a forehand long for the break.

Conversely, Stepanek stamped out a break point with smart and accurate serving, held to love with an ace for 3-1, and almost broke again in the fifth. Murray held, but would not win another game, broken both in the match and in spirit by a net cord that crawled over on break point for 2-5, and Stepanek sealed his quarter-final place, in under two hours, 6-2.

Murray was disconsolate about his performance, but in particular the first-set tie-break:

“I have only got myself to blame that I lost the first set. I don’t know how many set points I had, but quite a lot of them were on my serve. On this surface especially you shouldn’t really be losing sets like that. For me, that’s what’s disappointing about the match.”

Having already been to the gym straight after the match, he admitted he would now take a couple of days off.

“I won’t hit any balls. I won’t go to the gym. Then on Sunday I’ll start hitting balls again—but the body needs a little break just now.”

He will also be back to headline the fund-raising ‘Rally for Bally’ event in memory of the former British women’s No1 who died last month. And he admitted he would take in some of the World Cup with his friends.

Not surprisingly, Stepanek was thrilled with his result—he is now in the quarters of both the singles and doubles events.

“I think the best [matches] are always the best targets. Doesn’t matter where you play them, but definitely it’s special to play on grass in England after his winning Wimbledon, he won Olympics here. Even here in Queen’s he won, so literally he won everything here. Beating him is actually a great win for me. When you play the best ones, you’re going to come out with your best. I think that’s what I did today.”

He next faces No7 seed Kevin Anderson, who beat another serve-and-volley stylist in a thrilling third-set tie-break.

The other quarter-final in the bottom half of the draw will feature second seed Tomas Berdych, who beat Adrian Mannarino, 7-6, 6-4, against more old-school serve-and-volley skill in the shape of Feliciano Lopez—one of the grass-court titlists in the draw—who beat Kenny de Schepper in three tie-breakers.

Things panned out rather more easily at the top of the draw, as No1 Stan Wawrinka sailed past a former Queen’s champion, Sam Querrey, 6-2, 6-2. He will face wither Marinko Matocevic or Jo-Wilfried Tsonga for a place in the semis.