Queen’s 2014: Former semi-finalists Dimitrov and Lopez save best for last 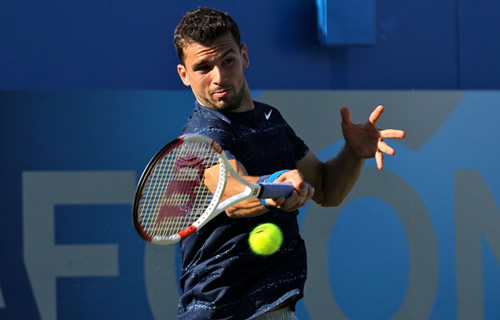 The weather forecast for semi-final Saturday was wonderful: 21 degrees, modest humidity, gentle breezes. In fact, just about perfect after a week during which barely a cloud filled the sky and blistering sun shone on the sport of summer, the lawns of London.

But the forecast, for once, let the Aegon Championships down. Torrential rain delayed play for only half an hour, and still bruise-dark clouds hung overhead and the wind blustered from the east, bringing a certain chill to proceedings.

Never mind. The first match of the afternoon promised to compensate for the lacklustre weather. It brought together two of the stand-out names of the year so far in popular Swiss Stan Wawrinka and the equally popular Bulgarian Grigor Dimitrov.

During 2013, 29-year-old Wawrinka won a personal-best 51 matches, upsetting the likes of Tomas Berdych and Andy Murray at the US Open, before almost doing the same to Novak Djokovic.

This year, he capped it all with victories over Djokovic, Berdych and Rafael Nadal to win the Australian Open and then his first Masters title in Monte Carlo—beating arch rival Roger Federer in the final.

The man on the other side of the semi-final net, the 23-year-old Dimitrov, was also starting to fulfil his reputation as a junior Wimbledon champion.

Already a semi-finalist here in 2012, he broke into the top 20 this year after reaching his first Major quarter-final in Australia, and went on to win his first 500 tournament in Acapulco, then the Bucharest title, plus the semi of the Rome Masters. The youngest player in the top 20 rose to No12, and with an elegant and explosive game, pin-up looks and a superstar girlfriend in the shape of Maria Sharapova, his has become the name on lips of everyone in the tennis world.

These two men, both with glorious single-handed backhands, both capable of changing the pace, angle and spin on that wing and of serving at over 130 mph, also joined up for doubles earlier this week, so there was little about each other’s games they did not know.

As Wawrinka said ahead of what would be their third meeting, their first on grass: “I need to push him, try to put him on the defence. But he’s been playing well, especially on the grass. He’s serving well. He’s adapting. His game is perfect for grass.”

But the weather proved to be an omen.

The first shot was promising enough: a serve-and-volley play by Wawrinka to claim the opening point on his way to an easy hold. Indeed the first four games of the match were text-book, with both serving well and dropping only two points apiece.

And then the clouds gathered, not just over Centre Court but, seemingly, over Wawrinka’s shoulders. He opened the fifth game with a double fault, then pushed a backhand wide and had to chase to the net to save two break points. There was the hint of a twinge as he surged forward, but he played through three deuces, survived two more break points but then double-faulted to concede the game.

He would not win another as Dimitrov plied exquisite short, sliced shots that Wawrinka could barely reach, and pounded down his serve.

To rub salt into the wound, he broke Wawrinka to 15 with a winning pass for 5-2, and fought off a break point after his only double fault to claim the set with a carbon copy of Wawrinka’s signature down-the-line backhand, 6-2.

As if to celebrate, the sun burst out and the wind dropped, and that seemed to lift Wawrinka at the start of the second set. He opened with an ace, made an aggressive drive volley winner and held with ease.

Again, though, Dimitrov looked impressive both with his angled sliced returns and, when he decided to open up, winners down the line.

Wawrinka kept up his serving level with two aces in the third game, and had the chance to break the Bulgarian in the fourth. But the maturity of the young player, and the confidence that has come from winning titles, carried him through, levelling at 2-2 with a 135mph ace.

There’s nothing better than to be in the final

And to prove the point, he made back-to-back 133 serves to go 3-3, even though the grey clouds gathered amid more strong winds. Perhaps the conditions played their part, but the Swiss began to make a string of errors, and conceded an easy break. Dimitrov served out the match to love, 6-4.

Wawrinka made no excuses: “It was not my best match. I didn’t serve the way I wanted and didn’t move well. But I think Grigor was playing well, being really aggressive, serving big and mixing a lot.”

Dimitrov, into his first grass final, will be aiming to become the first man to win a title on three different surfaces this year, but was happy to enjoy this moment: “It’s a good feeling. I always wanted to be in a final out here, stepping out there on Sunday means a lot to me.

“I don’t know why I have such a strong intuition about that tournament. It has always been like one of the biggest events for me, for some reason. There’s nothing better than to be in the final.”

Well one thing might be better. Not his tennis, perhaps, which is hitting wonderful form just at the right time. But surely winning the final would mark the next big step for this star-in-the-making.

He will have to beat a man almost 10 years older, in Feliciano Lopez, who also continued to play outstanding tennis to put out Radek Stepanek, 7-6, 6-4, in a thrilling display of all-court cat and mouse tennis, full of sliced exchanges, drops and chases: The shot of the match came in the seventh game of the second set, Lopez racing down a lob into the corner, turning and hitting an off forehand winner.

He maintained some outstanding serving stats to win 80 percent of first serve points and 72 of second serve points—facing and saving just one break point in an hour and 40 minutes of play. He did, though, having nothing but praise for his opponent: “I think we both played a great match today. The quality of the tennis personally was amazing during almost the whole match, and I think he also played great. It was a matter of few points that came to my side, especially in the tiebreak when I was 6 3 up and then he came back. I have to be pleased and have to be proud of the quality of the tennis I have been playing today.”

Remarkably, Lopez and Dimitrov have played only once before, when the Bulgarian was still a teenager in 2009—at Queen’s Club. Then, the Spaniard won. This time, though, it could be an entirely different story.

Queen’s 2014: Wawrinka, Dimitrov, Stepanek, Lopez on grass & each other

Rally for Bally: One year on, Andy Murray again plays for friend & charity