Queen’s 2014: British duo James Ward and Dan Evans join the evergreen Lleyton Hewitt in the second round in London 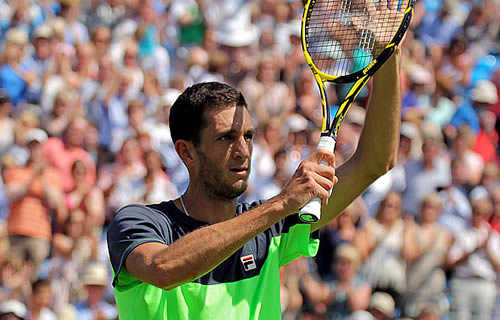 While British No1 and world No5 Andy Murray has, not surprisingly, been the one making headlines at Queen’s Club ahead of his Aegon Championship title defence this week, he is far from on his own in flying the home flag at the biggest grass-court tournament ahead of Wimbledon.

Murray has been joined by three wild cards in the main draw, and two of them made impressive progress through their opening rounds.

Evans, who came back from a break down in the final set, was very happy with his performance:

“Yeah, a good win, played well. Took my chances when I needed them and fought back from a break down in the third. It was a good day. He’s a tough player. I think grass is probably one of his favourite surfaces, as well. He’s got all of the shots to be dangerous on grass.”

He next faces the tall and powerful No7 seed, Kevin Anderson—and will have to do so in the first match back on centre court at just after midday.

But he relished the task, even though he revealed that he was carrying a knee injury: “I’m looking forward to playing [Anderson], to be honest. It’s always nice winning matches in the bigger tournaments.”

Evans will be joined in the second round by James Ward, ranked No155 but comfortably seeing off the higher-ranked world No91, Blaz Rola, 7-5, 6-4.

It was Ward’s second victory in three weeks over Rola after he beat the Slovenian in the French Open qualifiers. But like Evans, he also has a formidable task in the next round, playing the talented flair of Grigor Dimitrov, a former Junior Wimbledon champion who loves the grass and has ticked off progressively higher targets through the last 12 months. Now ranked No13, Dimitrov was a semi-finalist here in 2012 and will be one of the favourites to come through at least to the same stage this year. 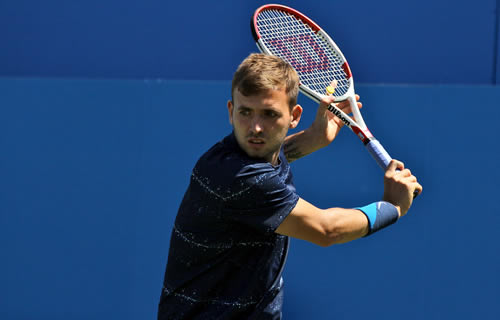 Ward, though, likes both the grass—he was a semi-finalist here in 2011—and his chances against the Bulgarian.

“The grass, it’s always nice,” said Ward. “I play well on it. It’s a surface I like. [Against Dimitrov], it would be obviously an upset if you look at the rankings. We practised last week. We know each other pretty well, anyway. I think it will be a good match.”

With a bye in the first round, Murray will not play his first match until Wednesday, against Paul-Henri Mathieu, who beat Aljaz Bedene, 7-6, 6-4, a near-identical score to their only other match at the same stage here last year.

A final mention on day one should go to four-time former champion, Lleyton Hewitt, who made his debut here 16 years ago as a 17-year-old.

He already holds the tournament record for most matches played—40 wins to 10 losses. He won his first tournament in four years in Brisbane at the start of the year and is ranked, at 43, close to his highest in three years. He is second only to Roger Federer in grass court titles and grass-court match-wins in the Open era, despite a career of constant injury setbacks and surgery to hips and ankles several times over.

Yet he looked as fit as he ever has in winning his opener here, 6-3, 6-3: wiry, slender, fast and passionate. Asked whether rankings helped to motivate him, he shook his head sternly:

“Couldn’t care less about my ranking and, you know, obviously every tournament I go in, I want to win. Every match I play I want to win. But the Majors are still what I play for. In a couple weeks’ time, one of the big ones for me. Yeah, that’s still the motivation. Nothing has really changed.”

He won Wimbledon in 2002, and the only thing that seems to have changed this year is that, for the first time in this correspondent’s memory, he played without his back-to-front cap.

But he still looks one of the most nimble grass-court players out there.

Queen’s 2014: Andy Murray on Amelie Mauresmo and his return to grass