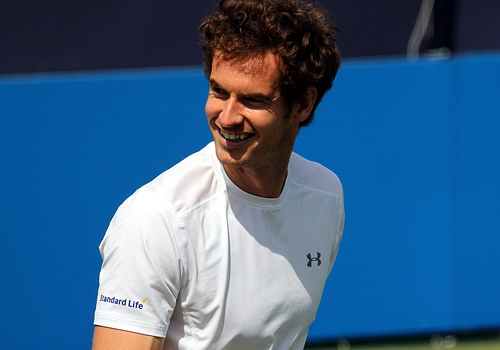 Age, it seems, is finding it harder to wither tennis players these days.

Everywhere you look, there are over-30s not just playing in the main draws of the biggest tournaments but playing deep into the final stages, too.

It perhaps seemed unlikely that Lleyton Hewitt, having won the Queen’s title 15 years ago as a teenager, would still be back here at the age of 34, albeit for his final appearance.

It perhaps seemed unlikely that Roger Federer, heading to his 34th birthday in August, should be back on Halle’s grass to attempt an eighth title—as the top seed and with a world ranking of No2—after reaching the quarters on his first visit in 2000.

It perhaps also seemed unlikely that Feliciano Lopez, who turns 34 in September, should be back at Queen’s for the 10th year in a row, having reached the final for the first time last year when he came within a point of beating a man a decade his junior, Grigor Dimitrov. 6-7(8), 7-6(1), 7-6(6). Lopez subsequently won the Eastbourne title and reached the semis of two Masters, in Toronto and Shanghai, to reach a career-high No12.

But in Federer’s Halle, the defending champion will play one of six over-30s left in the draw, Florian Mayer—and 36-year-old Ivo Karlovic is already in the quarters. And also in the running were fellow over-30s Dustin Brown, Alejandro Falla, Andreas Seppi and Tommy Robredo.

At Queen’s, the bottom half of the draw had already seen 30-year-old Gilles Simon and 32-year-old Guillermo Garcia-Lopez through to the quarters. Now the top half would find four over-30s among the eight contesting their spots. Lopez took on 30-year-old John Isner, Andy Murray played 31-year-old Fernando Verdasco and defending champion Dimitrov played 32-year-old Gilles Muller.

The last pair had met only twice before, and one of those meetings was here in 2012: Dimitrov won. But in Rotterdam this year, with the big, left-handed Muller going from strength to strength, Dimitrov was beaten in straight sets. It took Muller to a career-high 34, and the man from Luxembourg was showing that grass really suited his big-serving game. He reached the semis in ‘s Hertogenbosch and fired 37 aces in his first-round win here over Mikhail Youzhny.

Against Dimitrov, in what became a fast-paced match of just 75 minutes, he hit 19 more aces, out-performing even the fine serving of Dimitrov, who hit 15.

Muller converted his first break-point opportunity at the crucial moment in the first set to break for 6-4. He came close to doing the same in the fourth game of the second set, too, but Dimitrov stayed the course all the way to a tie-break, firing a 137mph ace along the way.

Both had thrown down a marker, each holding to love to reach 6-6, and there were few rallies in the decisive game, too. Muller gave up the first point with a double fault but a forehand hit wide by Dimitrov levelled at 3-3. With a couple of aces, Muller went to 5-4 and struck his big left-handed forehand down the line to go 6-4. Dimitrov saved the first match point with a winning serve but, in a rare rally, Muller kept his cool to make a forehand wrong-footing winner and reach his first quarter-final at Queen’s.

Asked about why he thought he was playing some of the best tennis of his life at “32 years young”, he identified several reasons: “Well it’s not easy to explain. I guess there is no magic for sure. Also, I was coming back from a big injury last year. At the beginning of [2014] I was ranked like 500, and when I was injured back in 2013, I really used that time off the court to get myself into great shape. I think this has been helping a lot.

“Before that, I had a lot of big injuries so it’s been lots of ups and downs. I feel now for the first time maybe in my career that my body is really, really fit, and I’m able to perform good tennis every week. Before was one good week and maybe three weeks where I was a little bit flat. Now I feel like I can produce my best tennis every day.”

He thought, however, that it may take a title here to really get noticed in his small, non-tennis homeland: “I’m not expecting hundreds of people waiting for me at the airport now when I get back home!”

Muller has a very British connection, too, in coach Jamie Delgado—a good friend of Murray—and as it turns out, Muller will play Murray in the quarter-finals after the Briton defeated Verdasco in front of a packed centre court, 7-5, 6-4, in an hour and a half.

He said of the prospect: “Everyone knows Andy is a great player. He’s been playing really well, especially this year, I think he’s back on where he was when he was winning Grand Slams. So, I mean it’s going to be very tough match for me but also very good test. It’s those challenges that I’m working for to play those matches on the big courts against the best guys in the world.”

Verdasco had beaten Murray only once before on his way to his best Grand Slam run, the Australian Open in 2009. It took five sets, and he almost did the same at Wimbledon in 2013 when he won the first two sets in the quarter-finals.

The Spaniard has a big left-handed game, strong serve and formidable forehand, and he pressed Murray hard, pulling back a break in the first set before conceding his serve on the third break point, 7-5.

The second set was also tight, and Verdasco had plenty of chances to break Murray in the first and third games. But Murray’s serving pulled him out a hole, while Verdasco’s increasingly let him down.

Offered up a growing number of second serves, Murray focused on the weaker Verdasco backhand, and the Spaniard ended up hitting seven double faults in the set, including three in the last game, to concede the break and match, 6-4.

There was sure to be at one more over-30 in the quarter-final line-up, too, but whether Lopez or Isner would have to wait for later.