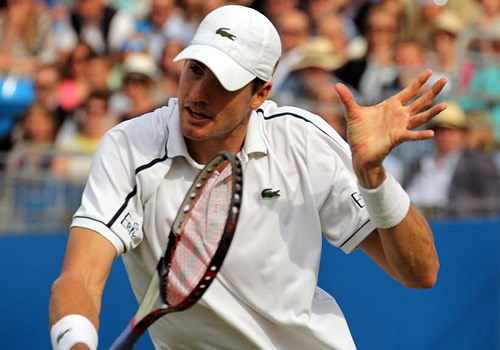 Some things simply improve with age, and a certain Feliciano Lopez has done just that.

He may be just one among an armada of eight Spaniards in the top 50, four in the top 20, third ranked behind David Ferrer and Rafael Nadal, but he has been enjoying a higher and more consistent ranking than at any time in his 33 years.

Lopez turns 34 in September, and was back playing at Queen’s for the 10th year after his best-ever run here last year to the final. Back then, he came within a point of beating a man a decade his junior, Grigor Dimitrov, losing 6-7(8), 7-6(1), 7-6(6), but he went on to win the Eastbourne title and reached the semis of two Masters, in Toronto and Shanghai, to reach a career-high No12.

And that scoreline last year, and his success on grass—his only quarter-final finishes at a Grand Slam have been at Wimbledon, three times—give the clue to the very un-Spanish way Lopez plays. Not content with having a single left-handed backhand, he has adhered to serve-and-volley tactics all his career. It often means, especially against fellow big servers, that his matches may not be the longest but they are often the tightest, decided by a point here and there in a tie-break rather than by a break of serve.

Such was the scenario when he took on John Isner, another slow-maturing man of 30 who has tried to add more aggression to his game with the years rather than depend upon one of the best serves in the business, one that is delivered from his huge 6ft 10in height. It is the shot in all tennis that Andy Murray would like above all others.

Isner’s record at Wimbledon was far from good, but he had won on Newport’s grass a couple of times, so coming to Queen’s for only the first time since 2008, it was hard to fathom how he would handle the grass-designed game of Lopez.

These two had met five times before, and Lopez edged it 3-2, but both their Grand Slam meetings had been desperately tight, with their Wimbledon match last year a 6-7, 7-6, 7-6, 7-5 win to Lopez.

Again, there lay the clue.

The first set offered not a break point to either man, they notched up 11 aces apiece and Isner edged the tie-break, 7-6(5), having won a point less than his opponent.

The second set saw Isner’s serving slightly the more consistent, 11 aces to only six from Lopez, though he dropped four points on his first serve compared with just three by the Spaniard.

Lopez was the more explosive, harried with his serve and volley, and troubled Isner with his low backhand slice. He also had the only break point of the set, though could not convert, but ended with 40 points to 38 and the set—just—7-6(9), though Isner had two match-points in that tie-break.

It was a surprise to no-one that the third set also went to a tie-break, though Isner looked at though he may grab the match at 5-4, with two hours on the clock. He hit a mighty return-of-serve winner for one match point, and hit another forehand winner down the line for a second. But Lopez’s serve was as solid as a rock: he aced, he serve and volleyed, and he held.

As the entered the final shoot-out, the Centre Court remained packed, gripped as they were by this unstoppable force against an immovable object. Lopez had 114 points and Isner 115, 28 aces to 35.

But a few minutes later, it was over, Isner’s serving remaining clutch when it mattered: 7-6(4).

Both men joined the top-four list for aces in the tournament: Lopez at 46, Milos Raonic at 53, Muller at 56 and Isner at 57. The last three are into the quarter-finals, but it was Lopez’s misfortune to face the best of them.

Isner will next play Viktor Troicki, who overcame Marin Cilic in three sets at the end of a packed day in Kensington.