Queen's 2015: South African No1 Kevin Anderson books his place in the final after a three-set win against Gilles Simon 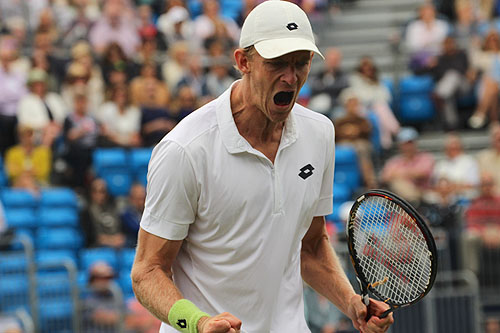 The quietly-spoken South African Kevin Anderson continued to make plenty of noise with his tennis and make his best-ever grass-court run with victory over No7 seed Gilles Simon, 6-3, 6-7(6), 6-3.

And in a week that has seen various records broken in the serving stakes, Anderson added his name to the list with a career-high total of 34 aces in a best-of-three-set match, and was just two short of matching his overall high of 36 set against Nikolay Davydenko in a best-of-five, at Wimbledon 2010.

Earlier this week at Queen’s Club, both Gilles Muller (37) and John Isner (36) reached career-highs in aces in best-of-three set matches, while Ivo Karlovic struck a record 45 in Halle.

But it’s also been the quality of the opposition over whom Anderson has scored what is now a tournament tally of 96. In the first round, he beat the terrier-like returner and former champion Lletyon Hewitt in three sets, then beat French Open champion and second seed Stan Wawrinka in two tie-breaks.

His quarter-final against Guillermo Garcia-Lopez was completed in two, 7-6(7), 7-5, but Simon posed one of the sternest tests, for the Frenchman is one of the most resilient returners in the game. As Anderson put it, with a smile: “He calls himself the return genius: He knows his way around the return courts!”

It was with a touch of irony, then, Simon was the one to grab the second-set tie-break and Anderson who scored the only two breaks in the match.

Anderson hit an additional 29 winners over and above his aces—all the more impressive given the damper conditions: The initial warm-up between the two players was terminated when the first shower passed over Kensington.

Anderson’s position, though, remained rather happier than that of the man he would face in Sunday’s final: Andy Murray and Viktor Troicki were halted half an hour into the second semi-final, 3-3, as rain once again swept through. By 7pm, with the sky still gun-metal grey and the court-covers drenched, the confirmation came: Murray and Troicki would resume before Sunday.

“I think Andy might have—it happened to him recently in Munich. I think we had to come back and play the semis and finals on the same day… Just for me it’s a little strange not knowing who you’re playing still and waiting around but I can’t really let that affect my preparations.

“[Andy’s] proved himself time and time again to be one of the best players in the last decade, really. The way he moves, the way he returns, especially on the grass, he’s obviously put up some amazing results. I played him a few times, beat him the once [in 2011] but he has got the better of me quite a few times.

“It’s tough, because I feel like he gives me the opportunity to play a little bit, but he just counter punches so well. He just gets so many balls back. If it is him, I definitely have my work cut out for me.”

Of course, Murray still had to overcome the Troicki challenge, though he already had six break points against the Serb when play was halted.

But win or lose, this is new territory for Anderson, and something he admitted was rather special.

“It’s a tournament I remember watching at a very young age. I didn’t really understand how the tour worked. Everybody knew Queen’s, though, as the week before Wimbledon, and you had the best players in the world playing it. To be in the finals myself feels great, and it’s going to be a very big match for me.”

Should he go on to claim the title, Anderson will reach 200 match-wins and pocket his first ATP 500 crown: And don’t put it past him.