Italian star moves to 19 wins from last 20 grass matches; will play Cilic or Krajinovic for title 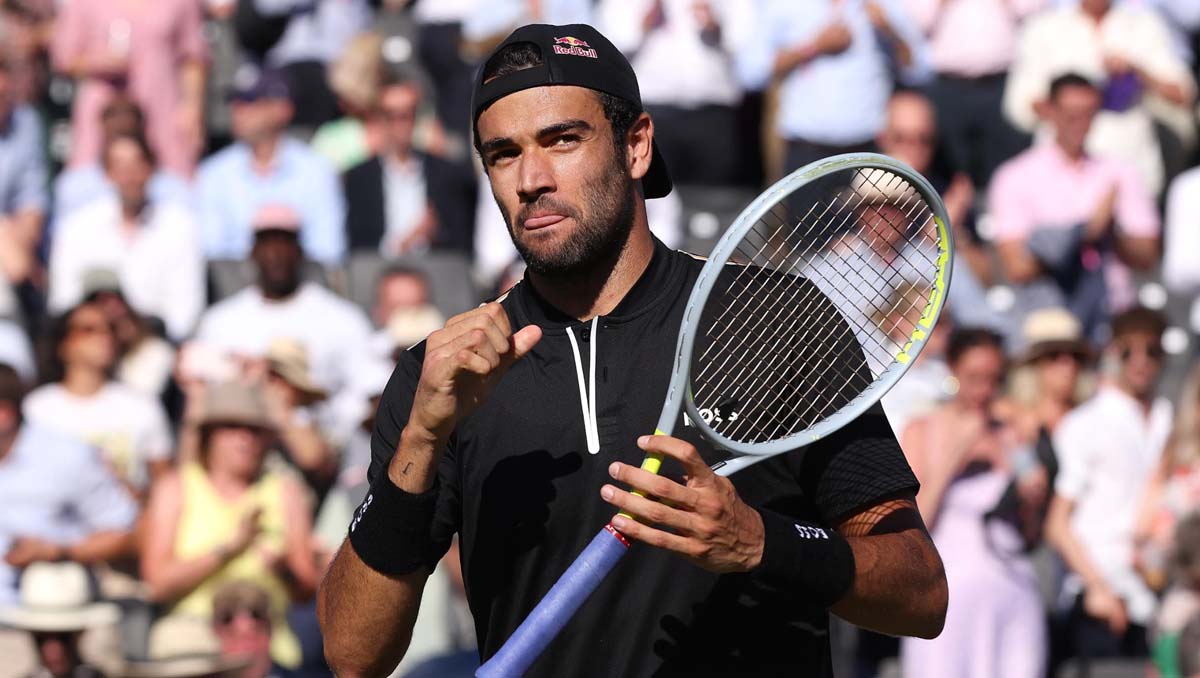 The semis at Queen’s this year were shaping up nicely to bring two former champions together in the final.

In the top half, it was two-time winner, Marin Cilic, who had been a fixture at the London tournament since his 2007 debut. He was now into his sixth semi-final at the Club where the 33-year-old has become so popular, and had won his 35th match at Queen’s and his 80th match on grass to get to this semi-final.

Here was a man who had climbed to No3 during the year, 2018, when he reached the final of the Australian Open, the quarters of two more Majors, and at least the quarters of five Masters. He ended the year with an emotional victory in Davis Cup, too. Cilic was also a former Wimbledon runner-up, and went all the way to the title at the US Open in 2014.

He would meet another 30-something in the shape of Filip Krajinovic—remarkably, for the first time. The 30-year-old Serb came into the tournament with an 0-4 record on grass and a 0-4 record in ATP finals.

The scenario in the bottom-half semi-final was not altogether different. It brought to court No2 seed and defending champion Matteo Berrettini, who was on an outstanding grass run of 18 wins from his last 19 grass matches. That took in last year’s Queen’s, this month’s Stuttgart and a final run to Wimbledon last summer—his only loss being to Novak Djokovic in that final.

That he had missed the last three months to have hand surgery might have left him unprepared for his return for the grass season, but he had survived three three-setters in Stuttgart, and a big test in the second round this week against Denis Kudla. But he was sounding and looking more confident with every match.

Now he too took on an unseeded man, Botic van de Zandschulp, who was, however, at a career-high 29 after a break-out year. He had started 2021 ranked 159, made his ATP main-tour debut in Australia, beat Hubert Hurkacz to reach the second round of Roland Garros, and reached his first semi in St Petersburg in October. But along the way, the Dutchman became just the third men’s qualifier to reach the US Open quarter-finals, where he was the only player to take a set off eventual champion Daniil Medvedev.

Some solid wins early this year—including the third round at Indian Wells, beating No9 Felix Auger-Aliassime—and his first final in Munich via Casper Ruud brought the top-30 breakthrough, and this week, he had beaten former champion Grigor Dimitrov, but Berrettini was another kettle of fish. Indeed the Italian had beaten him in their only previous match at Wimbledon a year ago.

So the chances of a final showdown between the Queen’s champions rather than the two unseeded Queen’s debutants seemed high.

Sure enough, Berrettini opened just as he might have hoped, with a love hold. He followed it with another: eight first serves, eight points won.

Come the fifth game, and the big Italian brought even greater pressure to bear on the Dutch serve, a 15-minute game and eight break points until Berrettini drew a final error for the break, 4-2.

He went on to serve for the set at 5-3, but all at once, his serve let him down, van de Zandschulp bedded in with some giant forehands and some nice net pick-ups, and denied the Italian a set point before going on to break—courtesy of a double fault.

But it spurred on the Italian, who upped his attack against the Dutch serve and worked another set point with two great volleys, sealing it with another net winner and fist-pump, 6-4.

He consolidated with a love hold to start the second set, before going on the offensive again in the fourth game, three more break points. But the Dutchman was proving adept at saving them, and went on to hold for 2-2.

A swift hold from the defending champion, though, and van de Zandschulp was stepping to the line again, just as a scattering of rain returned to Queen’s. By the time Berrettini had volleyed his way to another break point, it was heavy enough to halt play and cover the courts: unfortunate timing for both players.

But it took the Italian one point on their swift return to break, 4-2, and he played at an even faster and more aggressive rate, coming forward at every opportunity for 5-2.

Van de Zandschulp put up a sterling effort to stem Berrettini, but some outstanding shots, not least a lob returned with a cross-court winner, proved the Italian unstoppable: Berrettini seized the win with a volley winner, 6-3.

He afterwards admitted: “I think I played my best match of the week…” And it certainly looked that way.

He now had to sit back and size up the other semi-finalists, perhaps pondering on the marriage proposal from a fan during his interview. He paused: “Let me think about it!”

Medvedev into final of Halle

While Berrettini was making the Queen’s final, the new world No1 Medvedev was showing all his grass improvements since last year to reach the final of Halle, and that after a final run in ‘s-Hertogenbosch last week, too.

He had beaten old adversary Roberto Bautista Agut in the quarters for the first time, and now put out the home favourite, Oscar Otte, 7-6(3), 6-3. He will play either Nick Kyrgios or Hurkacz on Sunday.