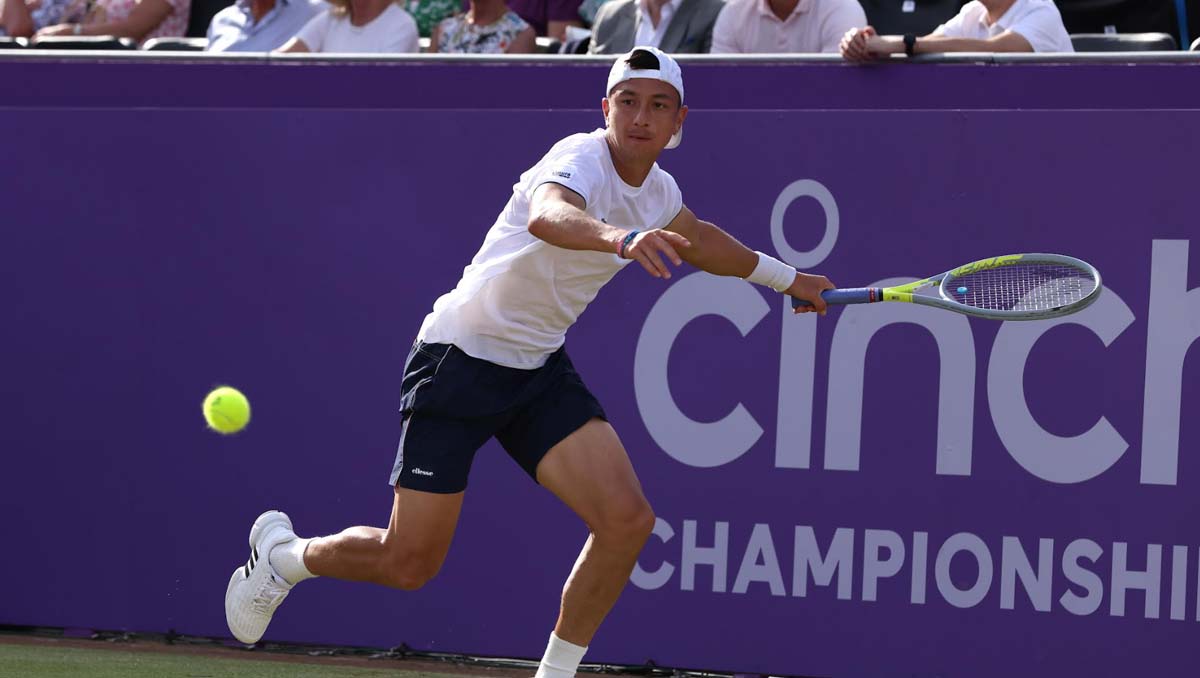 It started with a bang, and no mistake, for a British player who was largely unknown by many of the Queen’s fans when his name was slotted next to the top seed in this year’s draw.

Ryan Peniston, granted a wild card into his first main-tour draw, was ranked 180, but arrived with plenty of grass-court practice in his legs, making the quarters at both Surbiton and Nottingham in the weeks ahead of Queen’s.

Even so, and even given the lack of experience on grass of top seed and Roland Garros runner-up, Casper Rudd, Peniston had displayed fine grass-court tennis, using pace, slice, swinging serves, and racing into the net to finish with confidence. It was as though he had always been playing against this kind of opposition, and it was only with his first main-tour win on the board that his inexperience shone through in near-wordless, beaming interviews.

Come the second-round, and Peniston was still the calmest player in Queen’s, and it took him just 20 minutes to pound through the opening set against the 46-ranked Francisco Cerundolo, 6-0. The Argentine quickly found his footing, and he levelled the match, 6-4.

Peniston was broken at the start of the decider, and was pressed hard in the third and fifth games, too, but he fought through and got the break back, 4-4, battled past another break point to take the lead, and broke for the match, 6-4.

So into the quarter-finals, and on the hottest day of the year, with the temperature rising into the mid-30sC. The arena was packed, and the fans were rewarded with another superb opening hour from the Briton against Filip Krajinovic.

Peniston was knocking on the door almost from the start, taking on the Krajinovic serve with smart returns, pace, spin, and aggressive follow ups. He had three break chances in a long third game, and after a love hold, he worked three more.

Still the Serbian, a clever player with many strings to his bow, resisted, but Peniston again held to love as his swerving leftie serve drew errors, and once more he turned on the heat on return. This time he broke swiftly, and the Queen’s fans erupted in cheers. He did not flinch, serving out the set, 6-4, in little more than 40 minutes.

Here was another top-50 player, and Krajinovic had reached 26, had made four tour finals, including the Paris Masters, and was as experienced as they come. But the Briton seemed unfazed, as he had, indeed, against both Ruud and Cerundolo.

Peniston had immediate chances in the first game of the next set, firing forehands and backhands to the lines at will. Krajinovic held on, but was soon back to the line after yet another love hold from the Briton.

In the fifth game, too, Peniston had a break chance, but Krajinovic was beginning to ply his crafty style of play, using angles, slice, and changes of pace. The Serb worked deuce, and a big smash brought his first break point of the match.

Then on a second bite of the cherry, the Briton fired a forehand wide, and the Serb had the break. Krajinovic held for a 5-2 lead, and went on to serve out the set, 6-3, despite being wronged on a foot-fault call in the process.

Time for Peniston to consult the scribbled notes he had been carrying all week, just small prompts reminding him to stay aggressive, keep confident, but Peniston lost the first two points at the start of the third set.

He held on, but come the fifth game, the Briton could not stem the Krajinovic returns, and was forced to play too fast and into errors. The Serb was playing clutch, and remained tactically astute, and he served for a 4-2 lead.

The Briton was far from done, fired himself up, and picked off a lunging volley winner to break back. But the adrenalin rush, and the crowd noise, dulled his concentration for just a moment, and he overhit several balls to offer back the break to love.

The Serb this time held, and Peniston struggled to regain his focus—perhaps the result, mentally and physically, of the last few days—to spray more errors, and concede break, set and match to Krajinovic, 6-3.

For a man who has endured repeated injuries during his career, Krajinovic has remained a formidable opponent on most surfaces, and it is surprising that his range of all-court skills has not earned more success on grass. No wonder, then, that he was emotional with this win, which he explained was his first ever semi-final on grass. Indeed, like Peniston, the Serb had not won a tour-level match on the green stuff until this week.

Both the remaining seeds on quarter-finals day were former Queen’s champions. In the Krajinovic half, 33-year-old Marin Cilic would later take on the 23-year-old Finn, Emil Ruusuvuori, with the Croat aiming to win his 80th grass-court match. Cilic has been a fixture at the London tournament he has won twice: He has played every edition since his 2007 debut to notch up the most wins at Queen’s, 34, among active players.

And in the bottom half, defending champion and second seed, Matteo Berrettini, took on Tommy Paul. The big Italian, who like Cilic has become a favourite at Queen’s, recently won the Stuttgart title after almost three months away to have hand surgery, and after beating Paul, he extended his winning ways on grass to 18 wins from his last 19 matches.

Berrettini, the Wimbledon runner-up is now 30-6 on grass in his career, and will be favourite for a 31st win in the semis when he takes on Botic van de Zandschulp, who beat Alejandro Davidovich Fokina, 6-2, 6-4.