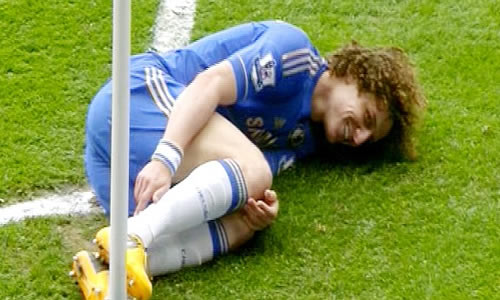 Rafael Benítez has launched a staunch defence of David Luiz after the Chelsea defender was pictured smiling moments after hitting the deck against Manchester United.

The Brazilian fell to ground after Rafael da Silva kicked out at the 26-year-old late in the game at Old Trafford before the United right-back was shown a straight red card by referee Howard Webb.

Luiz, who apparently said he was smiling because United fans had been calling him Sideshow Bob, was accused of diving “like a swan” by Sir Alex Ferguson following the game after he was pictured smirking as he lay on the ground.

But Blues boss Benítez was disappointed to see the furore surrounding the incident steal the headlines after his side’s 1-0 triumph at Old Trafford and was full of praise for Luiz.

“David Luiz is one of the best players in the Premier League – he is miles away from a lot of players, without a doubt,” Benítez told a news conference on Tuesday.

“We are talking about that [the incident], we are not talking about Chelsea beating United. We were much better than United in all three games – two at Old Trafford. I think that we did really well.

“We’ve started talking about this and I don’t agree with that. David Luiz was laughing because the fans were abusing him and after [came] the red card. The timing was very clear.

“But we continue talking about this instead of trying to eradicate the bad tackles that we see every week.

“We are giving importance to something that is not as important as other things. I don’t like this situation. We are talking about one of the best players in the Premier League.

“My job is to try to point out [that Luiz is] one of the best players in the Premier League and we have to respect him.”

Theo Walcott: Arsenal ‘deserve’ to be in the Champions League