Andy Murray beats Pablo Cuevas in straight sets to reach the third round of the China Open, as Rafael Nadal also advances 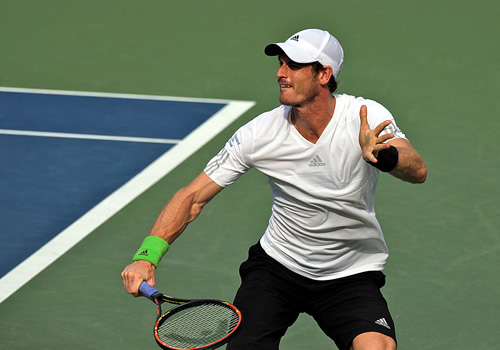 In the bottom half of the draw, the No2 seed Nadal beat qualifier Peter Gojowczyk, 6-3, 6-4, and thus remains on course to meet the No3 seed and 2011 Beijing champion, Tomas Berdych in the semis if they each win their quarters.

In the top half, Murray—never successful in Beijing but with an outstanding record in China having reached three Shanghai Masters finals and won two of them—beat Pablo Cuevas 6-2, 6-2 to set up the prospect of a semi-final contest against arch friend and rival Novak Djokovic, who is yet to lose a single match in the 21 he has played in Beijing.

Murray, whose title last week in South China was his first since winning Wimbledon in 2013, is still in pursuit of a place at the World Tour Finals, and has begun, in the country that he loves almost as much China loves him, to show some of his finest form since returning from back surgery.

In Shenzhen, in punishing conditions of heat and humidity, he showed grit, determination and passion in fending off first-set deficits against Juan Monaco and Tommy Robredo. This week, that same spirit brought him back from an understandably weary opening against the towering and dangerous Jerzy Janowicz to power through the third set for a confidence-boosting win.

That confidence oozed from the Briton in a fine display against the interesting Pablo Cuevas, who has put together the best season of his 28 years to win his first two titles and a career-high ranking of 35.

The Uruguay man was outside the top 200 at the start of the year, but came back from knee injury to win Umag and Bastad, along with two Challenger titles. At Umag, indeed, victory took him eight matches, as he worked through qualifying to take out quality opposition such as Robredo and Fabio Fognini. And while all his success has come on clay, he put up an impressive showing against Kevin Anderson at the US Open, losing in a fifth-set tie-break.

So Murray needed to be on his toes in what turned out to be a deceptively entertaining match given the one-sided scoreline. Cuevas has a good-looking single-handed backhand, and the exchanges between that and Murray’s flexible and varied backhand produced some all-court rallies of touch, craft and some elegance.

There was never any doubt about the superior player: Murray served solidly, moved superbly around the extremes of the court, and lobbed to perfection. In both sets, he went up 4-0 before Cuevas got on the board, but the Uruguayan probed and tested with spin and angle to continue to test Murray. In the second set, indeed, he broke back in the sixth game.

But cheered on by a delighted crowd, Murray made few other mistakes on his way to victory in 80 minutes—and was moving and timing the ball as well as he has done in a long while.

Every part of Murray’s game, and his confidence, will come under greater scrutiny in his remaining matches. First up is US Open champion, Marin Cilic, who has carried the same assured ball-striking and bearing into China. He has made himself one of the most formidable opponents on the tour—little wonder he is fifth in line to qualify for London—but if Murray survives Cilic, he faces surely the most formidable man, particularly in China. However Djokovic’s quarter-final against another London hopeful, Grigor Dimitrov, is just as eagerly anticipated.

But what of Nadal, playing in his first tournament since being sidelined with wrist injury after Wimbledon?

Again, the scoreline suggested this was a straightforward win, but while Murray’s match had provided rich entertainment, Nadal’s was a see-sawing affair of errors and inconsistency. Nadal, who had played so well to beat Richard Gasquet in his first match, had countless chances to sweep over Gojowczyk—and usually the Spaniard does not need a second invitation.

Take the start of the second set: an opening game of 13 minutes, with a mass of deuces, two break chances, and finally a hold by the German. And in the third, it was a similar pattern: 9 minutes and more break chances missed before Nadal finally got the break.

Even in serving out the match, Nadal looked uncharacteristically wayward. It took him 11 minutes, fending off break points, to serve it out—after an hour and three-quarters.

He must count himself fortunate, perhaps, to face the unseeded Martin Klizan in the quarters rather than Murray, and to avoid Cilic in his half. So he has a couple more matches to find that consistent rhythm on which his game is founded. Then he may be ready for what could be a replay of last year’s final against Djokovic.