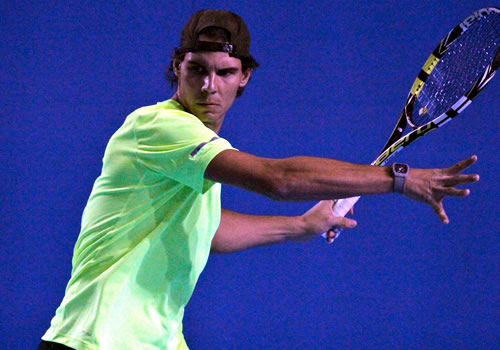 Rafael Nadal is currently ranked No1 in the world Photo: Marianne Bevis

For the first time since 2009, the year-end No1 will not be signed, sealed and delivered before its two chief combatants take to court at the ATP World Tour Finals.

The current No1 in the world, Rafael Nadal, remains the hot favourite, so big is his lead in the race to the end of the season. Even after Novak Djokovic’s stunning run since the US Open—three back-to-back titles in Beijing, Shanghai and Paris—he remains 1,400 points adrift and that means, in short, that he must not only defend his London title undefeated but must also win his two matches in the Davis Cup final that follows hot on the heels of the World Tour Finals.

And even then, even if Djokovic should end the year on a 24-match winning streak, it will be to no avail if Nadal wins two matches in London. As the Serb, who usurped the year-end No1 from Nadal in 2011 and defended his position last year, told the media soon after arriving from Paris:

“Losing No1 in the world was inevitable because [Nadal] was just winning wherever he was playing, and playing the best tennis of the year—and deserves to be where he is.”

Nadal is not just chasing the year-end top spot. Perhaps more important in his resume, and as a crowning achievement in a remarkable year, he is also in pursuit of the one big title missing from his CV: the London trophy. The closest he came was as runner-up to Federer in 2010, and last year he was absent through an injury absence that ran from 2012 Wimbledon until after this year’s Australian Open. No wonder he was happy to be here again:

“Always it’s great to be here. You are here because you worked well in last 10 months. [But I am] happy to be back after missing last year… excited to play here again: just happy.”

Nadal’s return has been the talk of the year, winning 10 titles from 13 finals, and yet he was passionate in his assertion that the No1 ranking was not his main aim for the year.

“How important is it to return here as No1? No more than if I’m here as No2 or No3. During the whole year, and in the past, I said a lot of times that No1 is not important for me any more.

“It was a goal in 2008, when I thought I had a great career ahead… Today, the goal is to be healthy, be competitive, and that makes me much more happy: To go to a tournament, win a good tournament, [more] than to be No1.

“That doesn’t mean it doesn’t matter. [But] it doesn’t make me feel special. Makes me feel more special when I am playing a good tournament.”

He went on to describe just how emotional his time in the injury wilderness had been.

“My achievement in getting back to No1 is the most difficult thing in my career. [But] the history of this year is not No1, it’s my history. That is, after seven months, without having the chance to compete, to play, to practise, I was able to be back, and in a short period be very competitive against everybody again, and winning the most important tournaments of the world.

“That’s my history and how I feel. I don’t change nothing this year to be No1. The emotions for me were very high during this season. That emotion is much more special for me than being No1. I already finished two years as No1 and if that happens again, great. But I feel that at the end of my career, that’s not going to affect if I am better or worse player in terms of history.”

Thus far, few who have watched and listened to Nadal over the years would be surprised at his perspective, his priorities, his world-view.

“Sure, there were moments when I doubted I would get back. The doubts are normal. Even today I have doubts. Doubts are part of life.

“A person who doesn’t have doubts is stupid or too arrogant. I don’t think I am either of those.

“Before every tournament, every season, every match, and much more when I got injured for seven months, I had doubts. I still have doubts. All my career I have doubts—but in my opinion, that’s a good thing.”

There is no doubting that he does not relish playing on the indoor hard courts—and he reiterated his belief that the year-end finale should be held in different places more often. He cited his reason for failing to win this title not just as fatigue but “because I have never have been a fantastic player on indoors.”

Reason enough, perhaps, that he was unequivocal when asked if Djokovic was favourite to win the title again:

He may not quote the statistics, certainly, but he will surely know that he holds a 47-8 record over his Group A opposition: David Ferrer, Tomas Berdych and Stan Wawrinka. Indeed he holds a winning head-to-head record against every man in London. What’s more, he has played close to his best ever tennis this year. Maybe as a result of being forced to shorten points, his serve has become a bigger weapon, his net game impressive and his offensive tactics more obvious.

By chance, his first opponent, Ferrer, turned the tables on him in the Paris semis just days ago—a rare win for the world No3 and one he was quick to put into perspective: “He will play better. He’s No1 and he’s Nadal.”

It seems, then, almost inconceivable that Nadal will not win at least two matches here this week, end the year as No1 and perhaps even fill that last whole in his trophy cabinet.

He may doubt, but few others do.