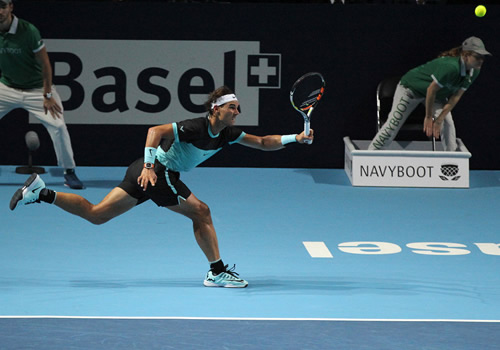 It may come as a surprise to all but the most stalwart Rafael Nadal fans to discover that, since losing the very first match he played in Basel 12 years ago this week, the Spanish star has visited this historic city on the Rhine just twice.

Nadal’s second appearance at the prestigious Swiss Indoors tournament, the very next year in 2004, was just as brisk for the Spanish teenager still ranked, as before, at 48 in the world: Another first-round loss.

It would be another decade before he returned to the home of one of his greatest rivals, Roger Federer, but again, the signs were far from good in 2014. After losing in the fourth round of Wimbledon, Nadal missed almost three months with a wrist injury, and when he returned for the Asian swing, he admitted to an appendix infection that would eventually require surgery in November.

To his credit, Nadal did come, he did play, and he did win his first two matches with ease. But they remained, thus far, his only two wins in Basel. After his exit to the on-fire teenage star, Borna Coric, he promptly announced at his press conference that he was withdrawing from the rest of the season.

He also suffered losses to players he had previously dominated, the likes of Fernando Verdasco, Tomas Berdych and Milos Raonic. By the time he lost in the second round of Wimbledon to Dustin Brown, he was ranked No10 where, just 12 months before, he had been the world No1.

Nadal, though, knows only one way to respond to adversity, and that is to work harder. The Asian swing, such a tough time for him last year, has brought some confidence-boosting wins with a final finish in Beijing and victory over two top-10 players to reach the semis in Shanghai.

He has already affirmed his place at the World Tour Finals, too, and hoped to translate that growing confidence into a good showing at his fourth visit to Basel.

“I start preparing for next season today. There will be no rest this year. I have no time. After the World Tour Finals, I will try to have a few days off, but that’s it.”

The tests started early: Nadal faced Lukas Rosol in his first round, the man who scored a shock victory over the Spaniard in five sets at Wimbledon in 2012. The Czech, though, is currently one of the lowest ranked men in the draw—and lest anyone forget, Nadal was absent for the remainder of 2012 with knee injury having entered the grass season with titles from Monte Carlo, Barcelona, Rome and Roland Garros.

Come Monday night and the opening jamboree at St Jakobshalle, Nadal was given pride of place in the first night match of the tournament—a gesture to help banish memories of his previous visits here. If anyone could rise to such an occasion, it was surely the fighting Spaniard.

But in the first 23 minutes, it looked as though the ghosts of Basel past—and Rosol past—were back to haunt Nadal. He held his first service game, but could find little rhythm from the back of the court, hit long, struggled with the pace of the Rosol returns, and double faulted to concede his second break of the set, 1-5. Rosol served it out, 6-1.

Nadal smelled blood, continued to step inside the court, and forced a double fault from Rosol to grab the set, 7-5, with a run of four games.

Nadal’s serving was also on the up, and he rode his momentum to break Rosol straight away, then holding for 3-0 in the third set. But Rosol bounced back with a break of his own in the seventh game, and it was nip and tuck to the concluding tie-break.

Nadal looked tight, and made three errors to go 0-3, but slowly and surely, he drew level with a couple of outstanding plays—a drop-lob-volley combo stood out—and he broke Rosol’s will. The Czech lost five points in a row to give Nadal the victory, 7-6(4), after two hours 17 minutes. That 2012 Wimbledon ghost was allayed, and with it any lingering ghost from Basel last year.

A few months ago, Nadal may not have withstood some great passages of play by the big-hitting Rosol, but as said ahead of this meeting: “Mentally I’m feeling great, with the motivation to keep going.”

That sentiment was again clear afterwards: “Tough match emotionally, but at the same time a great victory. It is important for me have these kinds of comeback. I was in this situation more than I would like this year, but the opposite—winning and finally I losing the match—so I’m happy to win like this, happy in Beijing and Shanghai to win a couple of matches fighting until the death.”

That will be music to the ears of his admirers and a relief to the tournament that has hoped for a winning return. Most of all, it will lift the spirits of Nadal, who must now ready himself for still bigger challenges that may, ultimately, include six-time champion Federer, in his very own home.